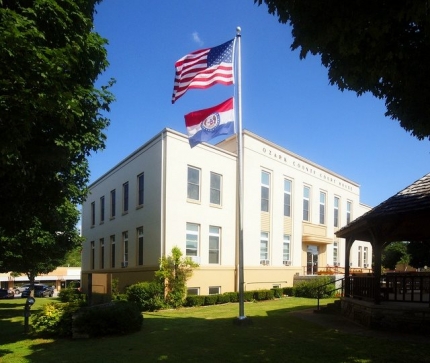 Wise and the commissioners have been discussing the idea of offering more paid vacation days for longstanding employees for about six to eight months as a way to gain new workers and retain good, longterm employees.

The paid vacation plan would apply to all county employees, including elected officials, all courthouse employees, those working for the recycling center and road and bridge, as well as the sheriff’s department.

The commissioners say the plan would not apply to the Ozark County Health Department, which is a separate entity from the rest of the county with its own governing board.

An incentive to get employees

The commissioners and Wise agreed that the increase in vacation time should benefit the county in the long run.

“It costs the county to have new people coming in. It takes time to train people, and then residents get used to the way a road is being graded, and next thing you know you have someone new in there doing things differently,” said Presiding Commissioner John Turner. “It just is a lot of time and effort that could be saved if we could keep people employed for the long-term.”

“I hope we’re just in a slump [with fewer people interested in applying for county positions],” said Western District Commission Layne Nance. “But minimum wage is going up too. Our starting wage isn’t much more than minimum wage. It’s killing us. So hopefully this will generate some more interest for employees who want to stay.”

Turner agreed. “I mean, we try to keep up [with wages] and do the best we can, but it’s tough to match what some of these people get,” he said. “Of course, they’ll go on a construction project somewhere and will work hard for three to four months with pretty good pay then be laid off all winter. What we have is full-time work they can rely on year round.”

“There’s a lot of places starting at $15 an hour, but you get hired on and then you don’t even get 36 hours a week,” Nance said.

Wise said he thinks the county’s benefit plan makes the positions more desirable than many other jobs in the area.

“You hear people say, ‘Well, if I can go work at [a local store] for the same amount of money, why would I work here?’ But they’re not getting the benefits there that they would by coming to work here,” he said, referring to the county’s paid vacation and health insurance benefits.

In addition to the paid vacation plan, county employees also have an insurance benefit that equals each employee paying a $148 per month premium for basic health insurance, with the county covering the other 80 percent ($598) of the monthly premium. Employees are able to “buy up” to a better plan, with the employee covering the difference.

“[Additional vacation time] is an easy incentive for us to come up with,” Wise said. “It’s an incentive that we’re the only ones who ultimately have the final say in what happens. How much our health insurance is going to be, things like that, we can’t control, but this is something we can offer,” he said.

At that point, the three different options differ from each other.

Option one would allow employees to earn 10 hours of vacation time per month from year five on. In that plan, employees would have the option of “rolling over” up to 40 hours of unused accrued vacation time to the next year.

Option two would offer 10 hours of paid vacation per month for those employed five to 10 years with the county. In addition, it would allow those who’ve worked with the county for over a decade to then have 12 hours per month. Again, employees would have the option of “rolling over” up to 40 hours of unused accrued vacation time to the next year.

Wise agreed that he thought that was also the best option.

Wise said he’d be leery of choosing option three. “I don’t think the auditors would like the ability to roll over 80 hours,” he said.

The other commissioners agreed that they weren’t in favor of allowing such a large amount of vacation time to be saved up and then executed in the following year.

“We’d like for our people to take their vacations as much as possible, instead of saving it all up, and then next thing you know, you’ve got someone taking off a full month right in the middle of the busy season,” Turner said. “I guess all the vacations still have to be approved by the employee’s supervisor though.”

Although Turner, Nance and Wise all said they were leaning toward adopting option two as the county’s new paid vacation policy, the group decided to table the discussion for the time being. The commissioners hope to make a final decision soon.