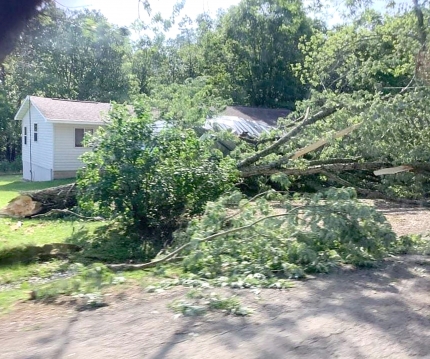 Kevin and Cindy Thomas’ friends, relatives and neighbors stepped in to help when the storm blew down a large tree that fell on the carport at their home on County Road 119.

Cindy said Monday that Kevin and her son-in-law, Denver Mitchell, were in the home Friday night when the tree fell but thought at first the noise they heard was thunder. “They were going to fish a tournament Saturday, so my son-in-law was at the house,” said Cindy, who was in Russellville, Arkansas, at the time. “Kevin called me and said he was fixing to go to bed early because they had the tournament the next day and they didn’t have electricity because a storm had gone through about nine o’clock. I asked if there was damage, and he said, ‘I don’t want to tell you this, but I figure you’ll find out anyway.’”

The huge tree in their yard fell on a carport covering a car and pickup (but, fortunately, not the pickup the two men needed for Saturday’s tournament). Cindy said the bed of the pickup had quite a bit of damage; the car had less damage.

Sure enough, her sister-in-law called a little later that night and said, “Are you OK? You know you have damage.”

Kevin planned to clean up the damage himself when he got home Saturday from the fishing tournament, Cindy said, adding that he’s “one of those people who never wants to accept help from anyone.”

While he was out on the lake, he got a call from Kevin Lemons, his cousin Phyllis Lemons’ husband, offering to come help with his tractor. Their neighbor Faron Price had also offered the use of his tractor. But Kevin Thomas declined the offers, saying there was nothing he could do at that point and he would take care of it himself when he got home.

But once he and son-in-law Denver got back from the lake late Saturday afternoon, hot and tired, Kevin saw that his chainsaw was broken. He called a nephew, Kane Thomas, who brought his chainsaw. Denver insisted on staying to help too. But as they began the huge task of cleaning up the giant fallen tree, the men quickly realized they needed more than a chainsaw.

Kevin called Kevin Lemons and asked, “Does that offer of a tractor still stand?”

“I’ll be right there,” Lemons replied.

Working together, the men got the mess cleaned up, and by the time Cindy got home from Russellville Monday, the only sign of the damage was the bent roof of the carport and the broken trunk of the old tree – half of which had broken off earlier, on New Year’s Eve, landing in the road.

“We can’t think those friends and family and neighbors enough for what they did to help us,” Cindy said.

She said they’ve turned over the claim to Peggy Johnson, an agent with Wallace Insurance Agency in Gainesville. “She asked us to send her pictures, and she’s taking care of it,” Cindy said. They’ve already heard from Allstate, their car insurance company, and now they’re just waiting to hear from their homeowners policy company.