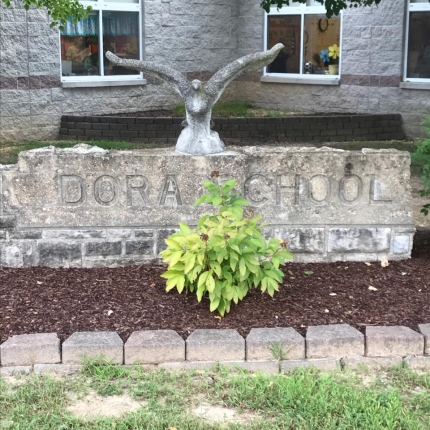 The Dora Falcons traveled to Eminence Thursday, Sept. 2, and won 5-2. “The game was back and forth through the first five innings and was tied 2-2 entering the top of the sixth,” said Dora coach Caleb Reynolds. “Junior first baseman Spencer Howard led off the sixth for Dora with a double to right field and scored when the next batter, sophomore Ashton Roberts, singled to left. Eminence managed to get a runner on in the bottom of the sixth, but freshman pitcher Hunter Roberts struck out the side to hold a 3-2 lead for Dora entering the final inning.”

Freshman Carson Howard singled up the middle to lead off the seventh inning for the Falcons. Sophomore Brylon Mayberry then doubled to left-center to extend the lead to 4-2. The next batter, Hunter Roberts, helped his own cause as the starting pitcher with an RBI single that scored Mayberry from second for another insurance run.

The Falcons threatened further, but Eminence’s starting pitcher, senior Landon Johnson, pitched well and managed to get out of the jam. Dora still held a three-run lead going into the bottom of the seventh. In their final at-bat, Eminence was unable to get anything going as Hunter Roberts struck out the leadoff batter before turning the ball over to Mayberry, who recorded the final two outs for the save as the Falcons held on for the 5-2 win.

Tuesday, Sept. 7, the Falcons traveled to Alton for a double header, with both games scheduled to be five innings each.

In the first game, the Falcons jumped out to an early lead on an RBI double by Spencer Howard. Howard would then score after an error in the Alton outfield, and Dora led 2-0 after half an inning. Alton answered with a couple of hits and a stolen base of their own in the bottom of the first, however, cutting the Falcons’ lead to 2-1 after one inning.

Both teams would have their opportunities over the next two innings, and Alton managed to tie the game, 2-2, in the third after a dropped fly ball by Dora.

The game was forced into extra innings. Dora failed to capitalize on an error, and the score remained tied heading to the bottom of the sixth.

Alton got its leadoff man aboard and managed to steal second base before the Falcons committed back-to-back errors, allowing the winning run to score, and Alton walked off with an extra-inning 3-2 win.

The final game of the night was not as closely contested as Alton’s starting pitcher, Devin Harrington, was nearly unhittable, allowing only one hit and recording seven strikeouts over four innings of work. The Alton bats also came alive and  managed to send the Falcons home with a 10-0 loss.

The Falcons hosted Summersville Friday, Sept. 10. Dora sophomore Brylon Mayberry was on the mound for the Falcons. “He stole the show, allowing just one hit and one walk and striking out six over five shut-out innings,” Reynolds said. “Our offense was rolling as well, scoring in every inning and capping off the night with a walk-off single by sophomore Ashton Roberts to finish a dominant night by the home team with a 10-0 win.”

Dora is back in action at home this week when the Falcons take on Norwood Tuesday, Sept. 14, and Koshkonong Thursday, Sept. 16, to complete their fall season.