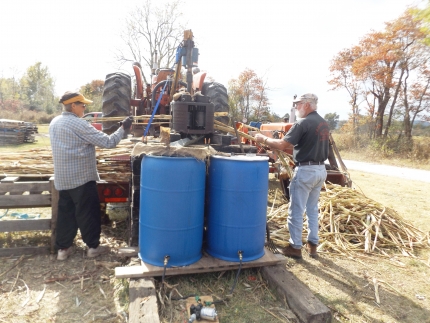 Jule Kruger feeds sorghum canes into the  mill while Bill Barnes collects the pressed canes; a local rancher will use the discarded canes as cattle fodder. Barnes, a tractor repairman, rigged a power takeoff to provide the power the mill that originally was provided by a horse. 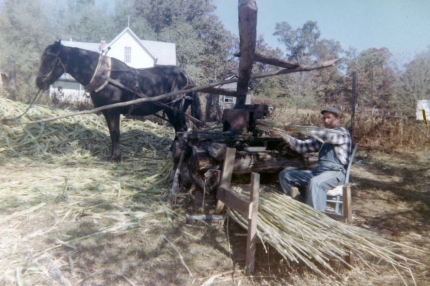 The late Hobart Morrison tends the cast-iron sorghum mill powered by his horse Dan in this photo that accompanied at 2013 Times story by Janet Taber about Dale Morrison’s memories of his family’s sorghum-making traditions. The old sorghum mill is being used this week by six Ozark County residents making sorghum behind the old Ledbetter store in Theodosia.

Six area residents, all members of the Ozarks Neighborly Exchange, will be making sorghum this week on a century-old cast-iron sorghum mill formerly owned by the late Dale Morrison of Dawt.

The sorghum will be made behind the old Ledbetter store on Highway 160 at the west end of Theodosia. Everyone is welcome to stop by and watch the process – and perhaps lend a hand if needed. The finished product will be sold for $10 per quart.

The group, which calls itself the Sorghum Consortium, includes Roy Johnson and Chuck Blanchard of Theodosia, Jon Kruger and wife Jule of Isabella, Bill Barnes of Thornfield, Jay Jacobs of Dora and Tom Kennedy of Clarkridge, Arkansas. They will use locally produced sorghum cane grown with no chemical fertilizers or pesticides, according Kruger.

The sorghum press, furnace and cooking pans will operate in an open-air setting, and the operation will be dependent on good weather. The work is expected to continue daily through Saturday, but those planning to visit are encouraged to call Chuck Blanchard at 816-665-6610 to confirm that the prevailing weather allows the sorghum-making to happen that day. Or leave a message for Kruger at 679-0446 for an evening call-back.

While set-up is scheduled to begin each day about 8 a.m., it’s expected that the process will be in the syrup and molasses stages between about 11 a.m. to 4 p.m. each day.

The sorghum mill to be used in the Theodosia work was featured in a 2013 Ozark County Times story by Janet Taber sharing Dale Morrison’s history with the sorghum-making tradition. The Morrison family’s sorghum story began in the 1950s, when Dale’s dad, the late Hobart Morrison, bought the sorghum mill from Jess King, grandfather of current Hardenville resident Wayman King. The heavy mill, in those days powered by a horse harnessed to walk a circular path around it, was made by the Chattanooga Plow Company, which operated from 1878 until 1919.

After seeing Taber’s article in the Times, Kruger contacted Morrison about purchasing the mill, and ONE members used it for sorghum-making in 2014 and 2015 at Woodpecker Ranch near Nottinghill. It now has been adapted to run off a modified tractor’s engine.

Janet Taber closed her 2013 story by writing, “Today making molasses, like blacksmithing, is nearly a lost art. But as the fall days shorten and the scent of wood smoke is once again prevalent, memories are revived of an activity that was once common in the Ozarks. The prospect of that hot biscuit with sweet molasses and butter might just be enough to inspire someone to try their hand at making molasses while there are still those who remember the details of how to do it.”

Dale Morrison, who died about seven months at age 93, would surely be tickled to know his old sorghum mill is back in use this fall in his beloved Ozark County.