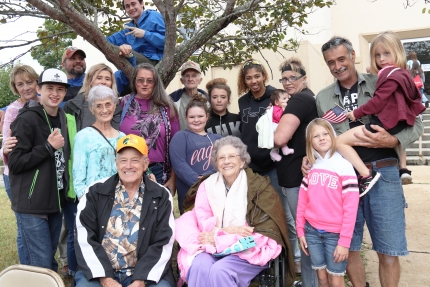 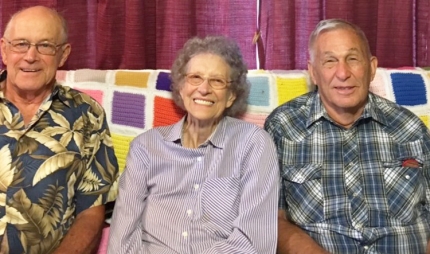 Fall officially started on Saturday, but I’ve heard that the predictions are for us to have a warm autumn and winter. My son Lyndon likes to cut open a persimmon seed to examine the kernel inside, which he – and others – say may predict the kind of winter we’ll have. If the kernel is in the shape of a spoon, the prediction is that we’ll shovel a lot of snow. If it’s the shape of a fork, it’s supposed to be a milder winter. And if it’s a knife, the cold and ice will be “cutting.”

I have a persimmon tree at the edge of my back yard. I’ll ask Kris to investigate. Thinking of persimmons brings to mind my great-nephew Dan Moody, who always enjoys eating persimmons, just like his daddy, Warren Moody, did.

It was very enjoyable for me, during the weekend, to have my son Marlyn Pitcock meet Marlyn Atkinson, whose mother Veryl Pare, was my dear high school friend; we graduated in 1939 and went our separate ways and then we both unknowingly named our sons Marlyn after a schoolmate, Marlyn Herd, who was killed in World War II. Marlyn Atkinson noticed my son’s name in my news items some time ago and inquired about it – and we discovered the connection. It was special to have both Marlyns together in my home. We enjoyed the visit very much. My daughter Kris got to visit with Marlyn Atkinson and his wife, as well.

Kris was also helpful in getting me to the square Saturday during Hootin an Hollarin. I sat under a tree by the stage, and people came by to greet me. My four children were together for the first time in a long time. Lyndon came from Fair Grove, and Marlyn came from Forsyth. And also grandchildren and great-grands.

My special granddaughter Alexus Owens, who’s from here, is 11 years old now and a fifth grader. She’s a sweetheart. She hugs and kisses me on the cheek. What a blessing to have those hugs!

Dot Strickland called to say they had their sons Alan and Myron and his wife from Indiana visiting here, and they went to Springfield and enjoyed eating at Lambert’s where they had the “throwed rolls.”

Thanks to White River Valley Electric Co-op for our electric power. In our so-called “good old days” we had no clue about the conveniences and blessings we have now, thanks to electricity.

Also, no more pushing an old lawn mower to keep a nice yard, as we did in those days. Growing up, we had an old push mower (no power except one of us, pushing it) too, but Daddy also used a scythe to cut the tall grass. I remember him sharpening the blades in his shop.

I have a good picture of my mother’s 50th birthday party on April 22, 1935, – a beautiful Sunday –  on the freshly mowed lawn at our family’s home. Both Lilly Ridge and Gainesville Christian Church friends came to our house, where my sister had prepared a big dinner in our mother’s honor. Daddy furnished the sawhorses and smooth boards (which he had planed mostly by hand, of course) for the table, and we covered them with tablecloths from our house. Johnny and Clara Harlin were special guests, along with preacher George Deatherage from the Christian Church, where we were members. In the picture, my girlfriend Marietta and I are standing, looking at the food.

Mother died of a stroke on Dec. 4 of that same year, when I was 13 years old. We had four doctors come in to try and save her, but they all mostly came in and just looked and said there was nothing they could do. The last words I heard her say were, “Take care of Linnie.” I always remember that.

I was blessed to have a good daddy. His two sisters came down to help us after my mother died. We butchered a big hog the week following my mother’s funeral. Along with the neighbors, they helped take care of the meat. Back then, we didn’t use pressure cookers, but we had hot-water-bath canning, and some of the meat was canned that way. The meat would taste so good during the winter. What a blessing that was! And of course we had salt-cured meat also. We covered the pork with salt – oh my goodness, so much salt! Doctors today would say, “What are you doing with all that salt?!” We