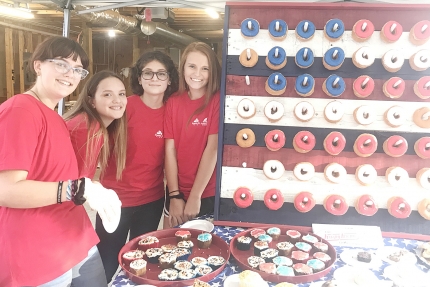 Crystal Fenske, Hailey Kruzewski, Elana Robles and Bailee Amos were part of the group of Lutie High School students who volunteered at Saturday’s Party on the Hill fundraiser event for the Semper Fi Fund, a non-profit organization that provides immediate assistance and lifetime support to post-9/11 combat wounded, critically ill and catastrophically injured service members of all branches of the United States military. 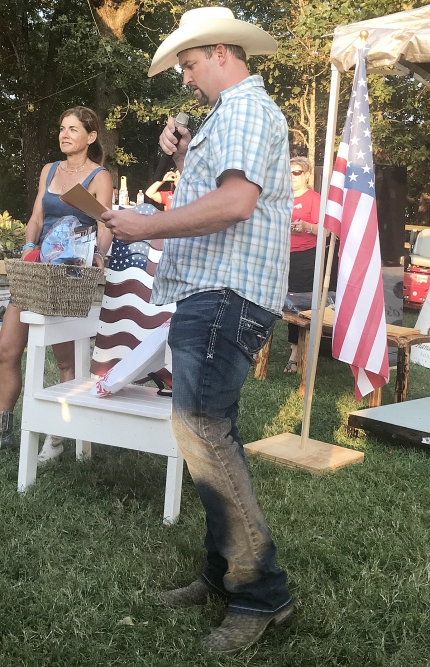 Monty Hambelton, assisted by Party on the Hill organizer and host Debbie Daniel, left, auctioned off a long list of merchandise, trips and services at the fundraiser event on Saturday. A Ferris Mower purchased by Al Sabatino for a little over $4,300 and a Clear Creek golf cart purchased by Kent Figge for $4,000 were among the high-ticket items. The total amount raised during the evening is estimated to be about $40,000, Daniel said.

A maxed-out crowd of 410 people attended Saturday night’s Party on the Hill west of Theodosia that raised money for the Semper Fi Fund, which provides assistance and support to post-9/11 combat-wounded services members of all branches of the U.S. military. Organizer Debbie Daniel had set a limit of 400 attendees for the event, and when that number of registrations was exceeded, Daniel reluctantly had to turn people away to keep the event from getting overcrowded.

The evening marked the second year for the event, and Daniel said it was a great success, thanks to all the volunteers and generous bidders and donors.

“Without the amazing people of Theodosia this event could not happen,” Daniel said. “The dedication and work ethic of the volunteers is unmatched. People who attended from big cities such as Los Angeles and New York were amazed at how this community came together to put on an event of this size.”

Among the more than 30 local volunteers was a large group of Lutie High School students who were busy serving food, selling T-shirts and helping in many other ways throughout the night.

In addition to local residents who attended, the event drew people from as far away as Seattle, Los Angeles, New York, Chicago, Washington, D.C., Tampa and Cleveland and even Mexico. Those attending enjoyed free pizza, nachos, burgers, French fries, tacos, lattes and ice cream, while musical entertainers performed throughout the evening, including the Branson Dynamic Duo, the local rock and roll cover band Inflexion, Kansas City’s Musivo, Mako of Las Angeles and Nashville’s Luke Nassar, who, according to Daniel, will be appearing on the American Idol TV series in an upcoming season.

The Ava VFW held a POW/MIA missing man table ceremony, and a contingent of Marines presented the colors.

Money was raised by bids on silent and live auction merchandise, trips and services. Monty Hambelton was auctioneer for the event, and he said the group of bidders was an enthusiastic bunch who seemed to have a good time helping raise money for a good cause. A Ferris Mower purchased by Al Sabatino for a little over $4,300 and a Clear Creek golf cart purchased by Kent Figge for $4,000 were among the high-ticket items. The total amount raised during the evening is estimated at $40,000, Daniel said Monday.

Daniel said she was pleased with the turnout, the volunteers and all the donations that made the evening a success for the Semper Fi Fund, but she’s always looking for ways to make it even better. “We learned a lot from this year’s event and will improve on it next year,” she said. “It’s all for a good cause. The Semper Fi Fund is a top five veterans’ fund that helps our combat-wounded service members have the resources they need during recovery and while they transition back to their communities. We would not have the freedoms we enjoy on a daily basis without the men and woman who raise their hands to protect our country.”