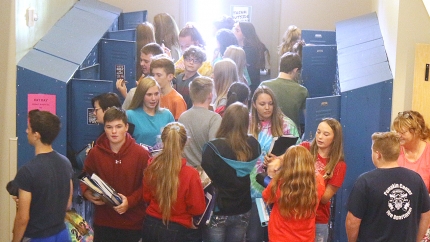 Times photo / Bruce Roberts: Students pass through the hallway Monday at Bakersfield High School during class changes. The school district gained a record 42 new students as the 2019-20 school year started earlier this month, bringing the district’s total enrollment to 391, including 21 preschoolers. Superintendent Dr. Amy Britt says the district’s four-day school week is one of the factors that led to the enrollment spike.