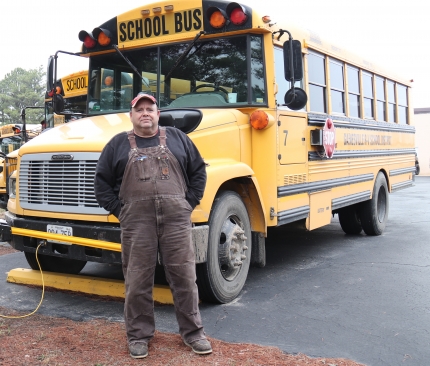 Times file photo / Sue Ann Jones Jerry Beasley, shown in this 2018 file photo, retired at the end of the 2018-19 school year after working 28 years as the district’s mechanic, a job in which he was responsible for maintaining the district’s school-bus fleet. All of Gainesville’s buses – 18 this year – passed the annual Missouri State Highway Patrol inspection this year for the seventh year in a row.

Two of Ozark County’s five school districts again had their school bus fleets pass the Missouri State Highway Patrol’s annual inspection with 100 percent of the buses approved. For the seventh year in a row, all of Gainesville School District’s buses – 18 of them this year – were approved. It’s a proud accomplishment for Gainesville’s bus mechanic, Jerry Beasley, who retired at the end of the 2018-19 school year. Beasley, a 1983 GHS graduate, had been the district’s mechanic for 28 years. Last year, Gainesville had 16 buses, and all were approved during the MSHP inspection.

Eight of Bakersfield School District’s 11 buses – 72.7 percent – passed the inspection. Two were labeled as having “defective” issues that had to be fixed, and one bus was put out of service until repairs could be made. Last year, seven of Bakersfield’s nine buses were approved (77.8 percent), with one labeled defective and one put out of service.

Three of Thornfield School District’s four buses – 75 percent – passed the inspection, with one labeled as defective. The 2019 results were the same as Thornfield’s 2018 results.

Dora School District had the county’s lowest percentage of buses pass the inspection. Only five of its 12 buses – 41.7 percent – passed the inspection with approval rating; four were defective and three were put out of service.

Dora superintendent Steve Richards told the Times Monday the bus-inspection issue is “an area of concern that we are addressing over the summer.” The defective issues were “mainly small items that were repaired the same day,” he said. “However, we take pride in the reliability and safety of our transportation for students. We are taking measures to make sure we do not score that low again.”

Last year, seven of Dora’s 12 buses, 58.3 percent, were approved during the annual inspection. Four had defective issues, and one was put out of service.

A total of 11,958 school buses across Missouri were inspected by MSHP during the 2019 school year, according to a Missouri Department of Public Safety news release. Of all buses inspected, 89.3 percent were approved with no defective items noted during inspection.

Buses having one or more defective items that do not constitute an immediate danger are rated as “defective,” according to the DPS news release. Buses with a defective item that constitutes an immediate danger are rated as “out-of-service.” Buses rated as “defective” may continue to be operated for the purpose of transporting students until repair is made. School districts are allowed 10 days following initial inspection to repair identified defects before being re-inspected by MSHP personnel. Buses rated as “out-of-service” must be repaired, re-inspected and then placed back into service by MSHP personnel prior to transporting students.

Buses not presented for re-inspection within the required 10-day period are reported to the Missouri Department of Elementary and Secondary Education.

Gainesville and Lutie were among the 261 Missouri school districts statewide that earned the MSHP Total Fleet Excellence Award for having approval ratings of 90 percent or higher, with no buses placed out of service.