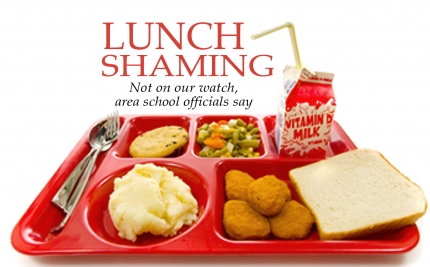 A Pennsylvania school made national news recently when it threatened parents saying their children might be placed in foster care if the parents didn’t pay the students’ unpaid lunch bills.

“Isn’t that ridiculous? I can’t believe they would do that,” said Gainesville High School principal Justin Gilmore, referring to the now-terminated practice of the Wyoming Valley West, Pennsylvania, school district.

Gilmore said unpaid school lunch bills are not what he would consider to be a major problem, but they can be an issue if they get out of hand.

“We obviously keep track of it, and when it gets to be over about $30, they really need to get it paid down,” Gilmore said. “I’ve seen some bills over $400, but I’ve also seen those bills get paid too.”

Gilmore said Gainesville could restrict students from extracurricular activities such as sports if parents refuse to pay the bill.

“I’ve never seen anybody held out over it. The bills get taken care of,” Gilmore said, adding that all such bills must be paid when the student graduates or the diploma could be withheld.

“For the most part, the parents are proud, and they do the right thing. The kids are proud too,” Gilmore said. “We live in a poor county, and people struggle sometimes. I’ve paid kids’ lunch bills myself a few times.”

The principal said such matters are always handled privately and confidentially.

“We work with parents and will accept virtually any payment schedule they can afford,” Britt said. “It’s not been a huge issue here, but it does happen sometimes.”

Like Gainesville, if the debt becomes severe and parents refuse to work with the school, Bakersfield administrators can restrict students’ extracurricular activities.

“I think we had only one major issue last school year,” Britt said.

The superintendent said the kids whose lunch bills aren’t paid are never singled out. “They eat the same lunches as the rest. It’s not their fault. It’s like anything else: if you allow it to get out of hand, it becomes a problem,” she said.

Other school administrators echoed the sentiments of their peers.

New Dora R-3 superintendent Dr. Allen Woods said that district makes sure the kids are fed. “We’re not going to not feed them,” Woods said.

Dora may also prohibit extracurricular activities if the lunch bills aren’t paid and parents refuse to do so.

“Once it reaches about $25, we make phone calls and send letters home,” Woods said.

At Lutie, unpaid lunch bills have also been a non-issue since the school began providing free meals to all students in 2017.

According to a study by the U.S. Department of Agriculture, which oversees the federal school lunch program, a majority of the nation’s school districts surveyed said they had unpaid meal charges.

The national school lunch program serves around 30 million children. About 20 million of those students qualify for free lunches, and 2 million qualify for a reduced-price lunch of 40 cents.

Britt said her district often includes the form to apply for free or reduced lunches in the correspondence to delinquent parents.

“We’re going to do all we can to work with the parents of our district,” Britt said.