Area students get their 2020 prom after all 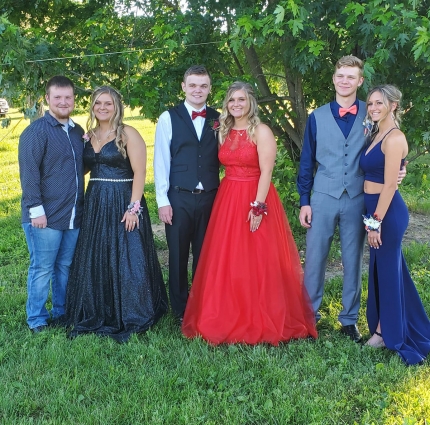 About 50 area students attended the 2020 prom hosted by Shield Solutions Saturday night, including, from left: Clayton Turnbull of Dora, Courtney Woodley, who is homeschooled, Gavin Martin of Dora, Alyssa Woodley and Michael Woodley, who are homeschooled, and Patience Naegele of Gainesville. 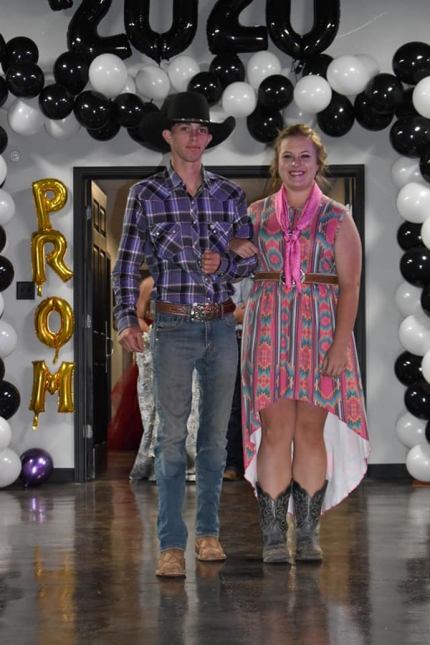 Dora’s 2020 prom began with a “grand march,” when the participants’ names were announced as they came through the decorated doorway at the Shield Solutions training facility where the event was held. Shown here: Dylan Hicks of Paragould, Arkansas, and Delanie Kilian of Dora. 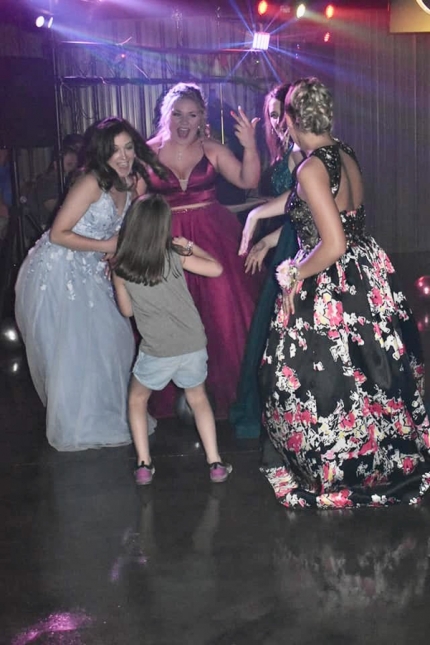 When some of the girls at the 2020 prom saw little Alyssa Woodley, granddaughter of prom organizers Greg and Pepper Martin, dancing alone Saturday night, they hurried over to join her. From left, Zoe Kimbrough, Courtney Melvin and Riley Pool of Willow Springs and Briley McKemie of Dora.

Several area high school juniors and seniors got to have their 2020 prom after all.

When the COVID-19 pandemic ended the 2019-2020 school year abruptly several weeks before the scheduled last day of the school year, many of the special events planned for this year’s graduating  seniors, including prom, were canceled.

That’s when Dora High School alumni Greg and Cass Martin and Greg’s wife Pepper stepped in. “Our youngest son, Gavin, is a junior at Dora, so he was missing his first prom,” Greg said Monday. “We’ve got a big building over there where we train teachers and law enforcement. We asked if the kids wanted to have a prom, and if they did, we said we would open it up and use it for that.”

The “big building” Greg referred to is a large training facility associated with his business, Shield Solutions, a security-training company based on Highway 14 northeast of Dora.

The Martins spread the word through social media posts, and Prom 2020 was held at Shield Solutions Saturday night, May 30, for any area seniors who wanted to attend. The event began with a “grand march” when participants came in through a decorated doorway as their names were announced by Cass Martin, who also served as a DJ, along with Greg and Pepper’s two older sons, Dalton and Tyler. They used Gavin’s DJ setup and sound system.

About 50 students enjoyed the event, “and we all had so much fun,” Pepper said. “Those kids danced all night long. I’ve never seen kids dance so much. I think they’ve been bottled up for so long, when they got an opportunity to get out, they were ready to dance.”

She contrasted the 2020 students’ response with her own prom several years ago. “We had dancing, but no one danced,” she said, laughing. “Everyone just sat and looked at each other. These kids didn’t care; they just wanted to have fun.”

The Martins’ son Gavin made sure “every single person there danced,” Pepper said. “He wanted everyone to have fun.”

While the prom was held with Dora students in mind, the Martins said all-area students were welcome. Guests came from Gainesville, Lutie, Willow Springs, West Plains and Paragould, Arkansas.

“We never imagined how people and businesses would jump in to get involved,” Greg said. “So many told us, ‘We want to be a part of this.’ Anyone who wanted to donate or help, we welcomed them.”

“We got a lot of hugs and thank yous,” Greg said. “I guess I didn’t realize how much they had missed out on. All night long, we heard thank yous. It was one of those things … you just didn’t realize it meant that much until you saw them there.”

Dora High School’s 2020 graduation will be held at 8 p.m. June 26. More details about the event are expected to be announced later this week.