Graduation ceremonies will go on for these 2020 seniors, school officials vow 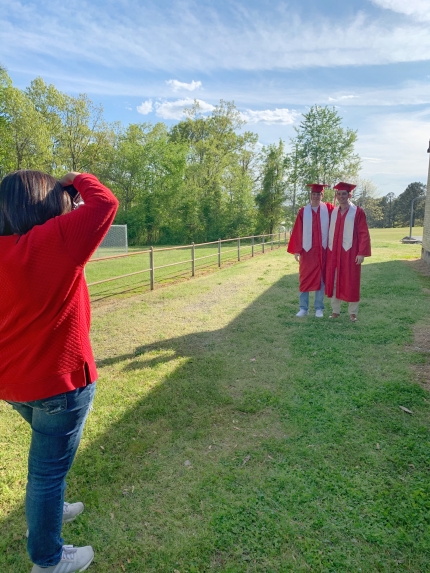 Gainesville photographer Karla Smith, whose school sports photos published in the Times and on Facebook have thrilled area families for many years, is using her talents to create graduation portraits for Gainesville High School’s 50 seniors – her gift to these students whose activities she’s recorded for years. Above: Ashley Poe blows a cloud of confetti toward the camera. 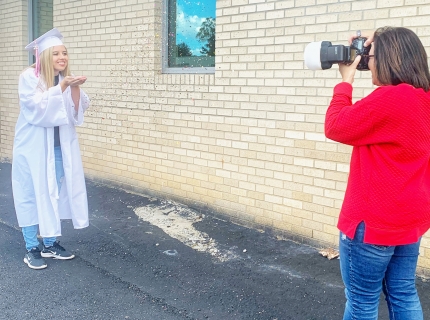 Friends Jalen Evans, left, and Jaxon Britt chose to be photographed together.

Editor’s note: We hope to have updates about graduation events planned by Dora and Lutie high schools in next week’s Times.

The COVID-19 pandemic may have turned the world upside-down for the class of 2020, but despite the abrupt, unexpected and unplanned end of in-person classes through the rest of the school year, Ozark County school administrators say they’re determined to make graduation a wonderfully memorable life event for this year’s seniors.

Bakersfield: ‘We’re going to go for it’

“We want so badly to make graduation as special as possible for these kids,” Bakersfield superintendent Dr. Amy Britt said Monday. “They’ve missed so many opportunities and events.”

Britt and her fellow Bakersfield administrators and board members anxiously awaited Gov. Mike Parson’s 3 p.m. press conference Monday, when he would describe the first phase of his “Show Me Strong Missouri” order relaxing the restrictions that have been in place since his April 5 “Stay Home, Missouri” shutdown directive, which closed all Missouri schools.

Bakersfield officials would “read through all the recommendations and guidance” of the governor’s order, Britt said afternoon. Then, Monday evening, she told the Times, “We’re going to go for it – in the gym.”

That means a real graduation event in front of families and friends, complete with caps and gowns, speeches and photographs flashing as each graduate makes that memorable walk across the stage to receive a diploma.

Bakersfield graduation is tentatively set for 6 p.m. Friday, May 22.

“It will be just like normal,” said Britt, “with a few modifications.”

For example, she said, “we’ll be in touch with each senior and mail them schedules for when they’re to arrive, with arrival times staggered, and we’ll tell them which of the three doors their group should come through. Each senior will have a limited number of tickets for family members. Then each student and his or her family will have a designated spot, spaced out in the gym, where they will sit, maintaining the required 6-foot distance.”

Each student’s spot in the gym will be marked with a 2-foot-by-4-foot personalized banner. “We’ll hang the banners up around town before graduation, like they do with the Christmas decorations on light poles and things,” Britt said. “Then we’ll bring them inside for graduation.”

Class valedictorian Andrea Yount and salutatorian Heavan Tiller will make their speeches, and so will a guest speaker (not yet confirmed). Scholarship winners will be announced. The event will be videoed, and later, business teacher Stephanie Guffey will create a spliced-together video of the event for each student, including shots of all the students walking across the stage and each student’s senior slide show.

Then, to create an extra-special finish, the graduation ceremony will be followed by a parade through downtown Bakersfield that evening. Each student will be invited to have a vehicle in the parade, decorated appropriately if he or she chooses, Britt said. Friends and relatives who couldn’t be admitted to the event due to the distancing restrictions can cheer for their graduate along the parade route, which will stretch from the school to the ballpark, or maybe loop around the bank and circle back to the school.

“We just want to do the very best we can for these students,” Britt said. “We want to make this a really valuable memory for them.”

Gainesville High School’s 2020 graduation, originally scheduled for May 8, which was also to be the last day of classes, is now tentatively set for 7:30 p.m. Friday, June 19, in the school’s Benton F. Breeding Stadium, principal Justin Gilmore said Monday night.

“Obviously everything’s tentative, but it’s looking like that’s what we’re going to do,” he said, adding that the June plans “look like our best bet to be able to have a graduation ceremony.”

Gainesville school administrators and board members are hoping that pandemic restrictions will have loosened by mid-June so that large gatherings will no longer be a problem and distancing requirements will be relaxed. Whatever the case, Gilmore said, school officials will work to make graduation a reality for the school’s 50 seniors. But they’re planning more than just a one-night event.

“That week in June, we’re going to make it a big deal,” Gilmore said. “We don’t know yet exactly what it’s going to look like, but we want that whole week to be special. We have prom tentatively planned for 7 to 11 p.m. Monday, June 15, in the gym. And we’ll hold the awards program at 5:30 p.m. Wednesday, June 17, in the gym, immediately followed by baccalaureate.”

Gilmore cautioned that these plans are still in the early planning stages and could change quickly, depending on how the pandemic plays out – or doesn’t.

He also expressed appreciation to family and friends who made sure all of the GHS seniors were “adopted” in a recent Facebook campaign. The campaign wasn’t initiated by the school, Gilmore said, but school officials liked the idea that invited community members to share encouragement and support to each of the students.