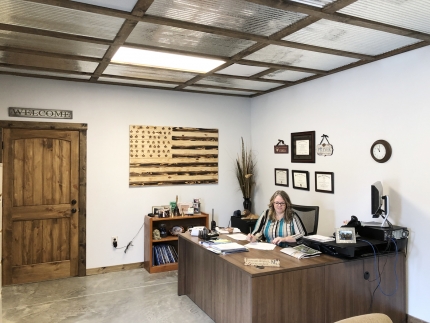 Bakersfield superintendent Dr. Amy Britt works in her new office in the school’s FEMA storm shelter building. The superintendent’s offices were moved into the FEMA building recently after several school officials and staff members chipped in to help with the cost.. Britt said the staff kept the costs way down and did a “marvelous job … I just love it.” The decor includes an American flag made from recycled wood by Bakersfield FFA student Ashton Yeager, who torched the wood to create the flag’s stripes and then “branded” in the stars. 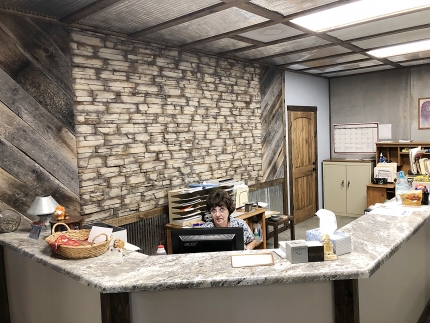 Bakersfield school secretary to the Superintendent Lola Bridges works in the new superintendent’s office. The wall behind her features reclaimed wood from an old barn that was on school property; the rock work was done by local professional Kevin Wray. 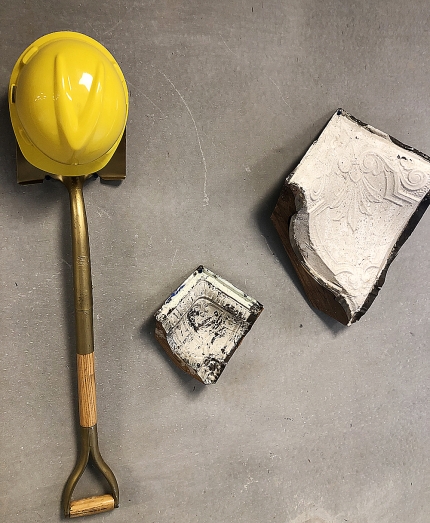 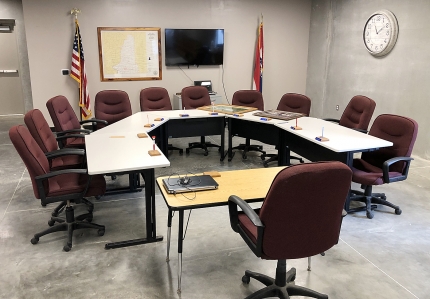 The Bakersfield School Board also moved its meeting room into the new FEMA shelter building. 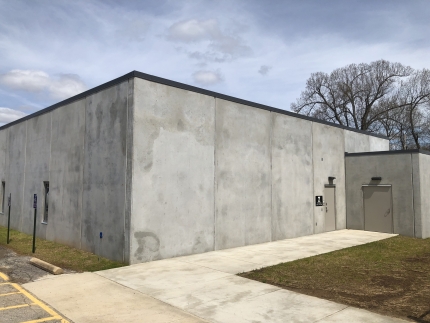 When the Bakersfield School District broke ground for its new FEMA storm shelter building on May 31, 2018, superintendent Dr. Amy Britt told the Times the new building would be “one big open room plus restrooms, a mechanical room and a FEMA supply room.” But Britt added that the building, which cost $1,390,000, with a FEMA grant funding 75 percent of the cost, would be plumbed for a future art room or additional classrooms or offices, based on need.

Recently it was decided that moving the superintendent’s office into the safe-room space made the most sense so that Britt’s old office, which is closer to the elementary school, could be renovated for speech, physical and occupational therapy. Moving those programs freed up another room in the elementary school so students don’t have to go outside the main elementary building during the day to access those special services.

The new office space was developed inside the safe room with financial help from several district officials and staff plus school supporters, said Britt, who added that she loves her new office, which has décor that includes wood reclaimed from an old barn that was on school property, rock work that was completed by a local professional and a burnt-wood American flag made by a Bakersfield FFA student.

The school board also moved its meeting room into the FEMA building.

The school's new safe room, completed last year, has the capacity to shelter 480 people and is available 24/7 during bad weather events. The building's doors unlock automatically when a tornado warning is declared for Bakersfield, Britt said, and also, a backup plan lets designated local residents open the doors with keys.

It took a while for the Bakersfield School's storm shelter to become a reality. The district began the process of applying for a FEMA grant in 2013, but its first application, finalized in 2014, wasn't approved by FEMA.

The district tried again, and in late 2016, FEMA awarded Bakersfield the 75 percent matching grant. After a few delays, the project was completed in 2018.

FEMA calculated the building's capacity and corresponding grant money based on the school's population and how many people live within a certain range of it, Britt said.

The building’s capacity and corresponding grant money awarded are calculated by FEMA based on the school’s population and how many people live within a certain range of the school, Britt said.

Bakersfield completed its new high school building in August 2016, but the grant's timing didn't work out for including the safe room in the new school's construction, so it was added on to the completed building near the entrance to the new gymnasium.