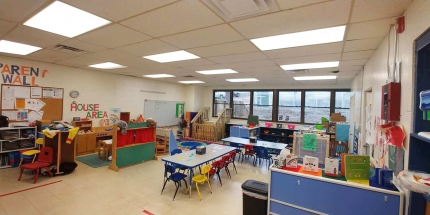 The half-day Bakersfield program came about when a Head Start program in Summersville closed, said Holly Tucker, education director for Ozark Action’s six-county area, and also the Bakersfield center manager. Summersville’s closure was due to competition from several other childcare programs that operated in the area. With the release of the Summerville program’s funding, Ozark Action looked around to find a community where a program for 3-year-olds was needed. Bakersfield turned out to be a perfect fit, said Tucker, who lives in the Bakersfield area.

“We looked at which community had the greatest need for this service to children and families, and also based on community requests. We were looking for the best fit for a classroom in our six-county area,” Tucker said. “I remembered someone saying, ‘It would be great if Bakersfield could have a Head Start.’ I thought, ‘I’ll just mention it,’ and things seemed to fall into place.”

Bakersfield Schools superintendent Dr. Amy Britt responded to the idea with enthusiasm – and action. “It wouldn’t have happened without her support, as well as the community’s support,” Tucker said.

Britt told the Times, “Bakersfield has never had a Head Start, so we are excited about the opportunity to partner with Ozark Action to provide this service to kids and families in our community. It gives younger children an exposure to the school environment and paves the way to enter our preschool program and then kindergarten ready to excel. Head Start serves 3-years-olds, and we serve 4-year-olds. Right now, we are only able to offer a half-day program because we have so many interested in our preschool program. However, with Head Start next door, it is our hope that we can eventually offer a full day between both programs.”

Starting at a younger age with school readiness skills, such as self-help and social skills, is crucial to the child’s later academic success, Tucker said.

To find out how many families were interested, notes were sent home with all Bakersfield students. Britt also contacted directly the families she knew who had young children at home. The request was also posted on the electronic media board in front of the school. Bakersfield preschool teacher Jody Bond “also had a huge hand in recruitment,” Tucker said.

Soon, the Head Start class had formed in a classroom the school made available, and staff had been hired: Danielle Kilbreath as lead teacher, Carrie Minge as teacher’s aide and family advocate, and Sarah Amburgy as the classroom aide.

The school even serves the Head Start students breakfast and lunch every day at no charge to the program, Tucker said. “That’s a huge benefit for the children,” Tucker said. “They bring it from the kitchen right to the classroom. That’s one less thing we have to worry about.”

As in many Head Start programs, including the one in Gainesville, Head Start enrollment is limited, and students are prioritized according to age, disability, family income and living situation. So far, 15 3-year-olds have enrolled; a few 4-year-old students also participate in Head Start and are dually enrolled in the Bakersfield afternoon preschool program.

The Bakersfield Head Start program doesn’t provide transportation, as the Gainesville program does.  “So far, that’s not been an issue,” Tucker said. “Parents and grandparents have been good about collaborating on getting all the students here. In putting this program together, the parents and community have been an integral part of its success.”

Britt said transportation “is something the district would like to see in the future in the partnership.”