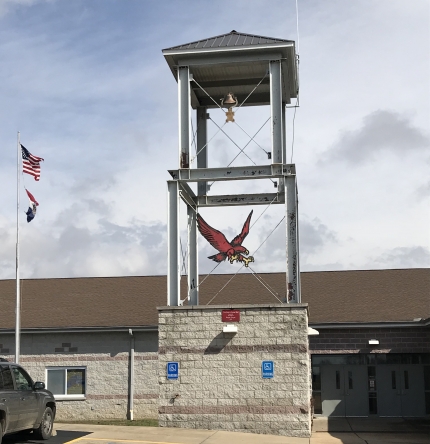 Voters in the Dora R-III School District will decide in the April 3 election whether to renew the current tax levy with a .10 increase.
Dora superintendent Steve Richards says approving the levy increase carries extra importance because it brings the district’s levy back to the 3.43 level where it qualifies for the state’s Small Schools Grant, which provides an additional $120,000 to the Dora  school’s budget each year.
For all but one of the years since Dora voters passed a school operating levy ceiling of 3.43 in 2006, the school’s levy has continued at or near that level, qualifying it for the $120,000 Small Schools Grant each year.
However, the county’s total assessed valuation increased from about $109 million in 2016 to about $115 million in 2017 due to requirements from the state that applied to the assessor’s office. In general, the revised requirements were aimed at making all assessments consistent, Ozark County Assessor Jama Berry told the Times. As a result of that increase in the county’s total assessed valuation, Dora’s share of the total valuation also increased – from around $15 million to $17 million. That increase in valuation meant the school’s tax rate went down to 3.329 – which means it will no longer qualify for the Small Schools Grant unless voters approve the .10 increase on the April 3 ballot.
Richard said that, if the previous levy had “sunsetted” at a time when the school’s operating levy had been 3.43, which it has averaged all the years since 2006, the ballot request would simply be to continue the current levy. But because it went down last year due to the district’s increase in valuation, the request must, instead, be for an increase to the $3.43 per $100 assessed valuation level.
A brochure being distributed by the district says that Dora’s .10 levy increase would cost the owner of a $100,000 home on less than 5 acres a total of $19 more on their annual real estate taxes. Owners of agricultural land with a $100,000 market value would pay $12 more, and the real estate tax on commercial property with a $100,000 market value would be $32 more per year.
The brochure notes that, even with the increase to $3.43 per $100 assessed valuation, Dora’s levy would still be lower than the school tax levys in 80 percent of Missouri’s 520 school districts.
Noting some of the Dora School District’s accomplishments over the past five years, the brochure lists the recent completion of the FEMA community shelter adjoining the school, a $1.14 million project that cost the district $400,000, and a $510,000 middle-school addition that cost $120,000 in local money. The rest of the projects’ funding came from grants and other sources. The school also now has computers for every child is grades 3-8, its athletic facilities have been renovated, a new agriculture barn was built on campus, new security measures have been implemented and updated playground equipment has been installed.
A simple majority is required to pass the levy question.
Richards invites area residents who have questions about the levy-increase request to call him at the school: 417-261- 2346.