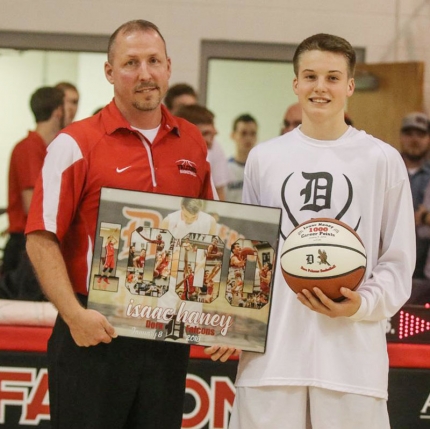 It’s always exciting when Hartville and Dora battle it out on the court. Last year, it took two overtime periods for the then all-freshmen Falcon basketball team to take down the Eagles. This year’s battle between the two state-ranked teams did not disappoint fans who packed the Dora gym at Friday night’s homecoming.

Dora, top-ranked in Class 1, trailed Class 2 No. 7 Hartville by as many as 15 points late in the second quarter, but the Falcons clawed their way back for a 65-62 overtime win, bringing their record to 20-1.

Sophomore Isaac Haney led the way  with 34 points. Bryson Luna and Mason Luna scored 10 each, followed by Waylon Masters with 6, Kyle Hambelton with 3 and Auston Luna with 2.

That evening, Haney was presented with a plaque and a basketball commemorating the 1,000 points he accumulated so far in his high school career.

Haney is being featured as KY3 Ozone’s athlete of the week this week.

The Falcons host Gainesville Thursday, Feb. 7, a make-up game from a previous weather cancellation. Then they travel to Norwood Friday and will take on Neosho at the Scoreboard Guy Shootout at Ozark High School.