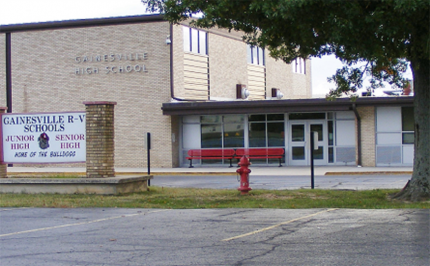 The Gainesville school district got a double dose of disappointment last week when, on Aug. 7, its proposal asking voters to increase its operating levy was defeated by 14 votes, out of 1,394 votes cast, and then, a couple of days later, it was notified that its application for a FEMA grant to build a storm shelter at the high school / junior high had been turned down.

Crestfallen Gainesville school supporters vowed to keep working to get district voters to support an increase in its operating levy in a future election – perhaps as soon as the general election on Nov. 6.

Gainesville superintendent Jeff Hyatt said in an email that, despite being disappointed that “the district did not receive funding for a FEMA shelter grant in this funding cycle, we will continue to keep our application current and on file for the next round of grant funding.” The application that was turned down would have provided 75 percent federal funding for the shelter, with 25 percent of the cost, an estimated $700,000, coming from the school district.

Hyatt said that, in addition to keeping that application active, the district “will also be pursuing a second type of FEMA grant” that would pay 90 percent in federal funds with only 10 percent of the cost coming from the school district. “We will not stop pursuing grant opportunities for the district,” Hyatt said.

The bad news about the storm shelter grant came soon after district residents turned down the district’s proposed 75-cent levy increase by a vote of 704 to 690. Approving the increase would have raised the school’s operating levy from the state minimum $2.75 to $3.50, still the lowest of Ozark County’s five school districts. The funds to be generated by the proposal would have paid for needed repairs and maintenance on the 55-year-old high school building and also would have added a “hardened” storm shelter at the elementary school and funded other improvements, including additional security measures.

In an email to the Times, Hyatt said Monday the board will discuss at its Aug. 20 meeting when and how to bring the issue before voters again, including whether to put it on the Nov. 6 ballot. Hyatt said he will also present “the same and alternate ballot language for a lesser operating increase as options to consider. We may just focus on maintenance and repairs only.”

If the board decides to propose the same levy increase again, “I want to simplify the ballot language,” Hyatt said. “We have to work harder to help the patrons who did not support Proposition Gainesville Bulldogs understand where the increased funding will be utilized. The district is in dire need of building improvements and renovations to better serve the student body. We will continue to use our reserves to address immediate needs.”

He warned that, if the operating levy doesn’t increase, “eventually the school district will need to make a decision between manageable class sizes” and things like extracurricular programs.

Without an operating increase, he said, “the district will have to make some tough choices. Do we fix the roofs and the HVAC systems or maintain smaller, desirable class sizes?”

This is the third time in 10 years that voters have refused to approve a financial request from the Gainesville school district. In April 2010, the district asked for a levy increase that would have brought the operating levy to $3.65. Voters turned it down, 892 to 311.

In April 2008, voters defeated another levy request, 390 to 366. That proposition was put to the voters as a choice to extend the then-current tax levy (believed to be $3.24, but the Times could not immediately confirm that figure) in order to build a multi-purpose facility at the high school that would also have served as a FEMA storm shelter. The proposal also included a new music/band classroom and additional classroom space as well as a new heating and air conditioning system for the high school and junior high.

The district had gotten approval for a $700,000 FEMA grant to build the storm shelter/ multi-purpose facility, but it needed voter approval to extend the current levy so it could borrow $3 million by issuing bonds to help pay its part of the project, estimated to cost a total of $6 million. Pre-election information published in the Times said the district would also use funds from its capital reserves to complete the project.

When the voters declined to extend the then-current 49-cent levy addition, the FEMA grant could not be accepted, the storm shelter could not be built and the operating levy reverted back to the state minimum $2.75, where it has remained.