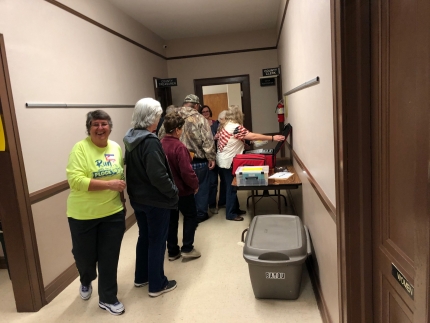 The majority of voters in the Gainesville R-V School District on Tuesday continued their 20-plus years of turning down levy-increase proposals, defeating the district's latest proposal on the Nov. 6 general election ballot by 150 votes: 930 yes, 1,080 no.

After an earlier proposal asking voters to approve a 75-cent per $100 assessed valuation increase was defeated by 14 votes (690 yes, 704 no) in the Aug. 6 primary election, the Gainesville school board put the issue back on today's general election ballot. But this time the proposed 75-cent increase was divided into 25-cent increases over the next three years, with a 25-year sunset clause that would end the 75-cent increase in 2043.

The district's current operating levy is at $2.75, the state minimum. The board hoped the graduated increase to $3.25 and the 25-year limit would make the increase more acceptable to voters, but the strategy failed to work.

"It's disappointing for our students and for the future students of Gainesville schools," superintendent Jeff Hyatt told the Times Tuesday night. "I would anticipate that we will have to reduce some staff members and redirect funds so we can take care of building maintenance. Basically our students may have to go without some different programs, which haven't been determined yet. Funding is going to have to be redirected to fix the roofs, which are estimated to cost about $980,000, with $200,000 to $300,000 of that needing to be done right now. It can't wait any longer."

We will have more election results in the Nov. 14 edition of the Times, including precinct-by-precinct vote counts.