Gainesville High School students stood in the parking lot Friday to watch a mock vehicle crash that was staged to show them how area emergency personnel – and parents – respond to the victims involved in a tragic fatality caused, in this enactment, by a drunk teenage driver. 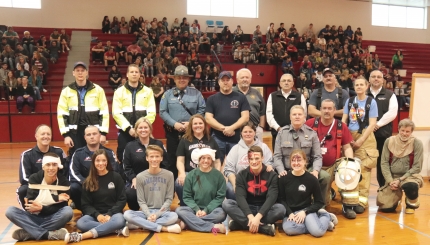 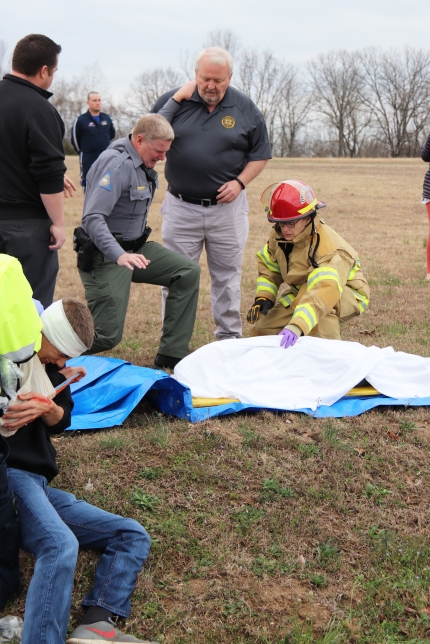 In the mock-crash “script,” Missouri Department of Conservation agent Jerry Kiger portrayed a law enforcement officer who responds to a crash only to find that his daughter, Natalie, has died of her injuries. Beside him are GHS principal Justin Gilmore (back to camera), Ozark County Sheriff Darrin Reed and GVFD first responder Lisa Hoffman. 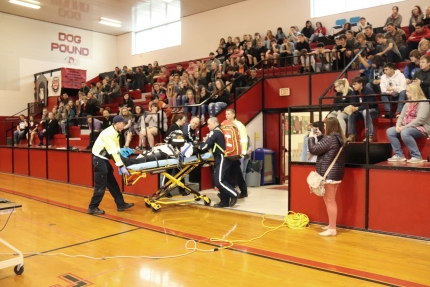 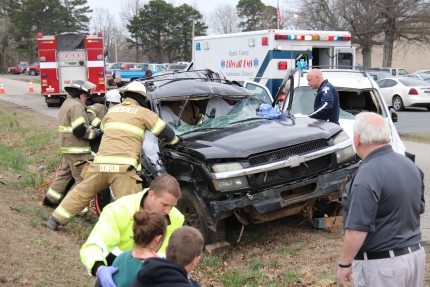 Area emergency personnel operate the “jaws of life” tool to remove the door from one of two wrecked vehicles that were brought to Gainesville High School Friday by Duke’s Truck Repair and Towing for the portrayal of the emergency response to a mock fatal crash caused by drunk driving.

Gainesville High School students watched solemnly Friday, the day before prom, as area law enforcement and emergency personnel performed their jobs in a mock car crash caused by a drunk teenage driver, with six GHS students portraying the victims and the drunk driver.

Emergency Medical Technician Brian Morgan of Gainesville organized the event, in which the “script” had student Eli Amyx acting as the drunk driver who caused a major collision with another car in which Garrett Morgan acted as the driver with Natalie Kiger as his passenger. Cody Donley, Peyton Donley and Blakely Morrison also portray passengers in the crash. Bloody injuries had been created with stage makeup applied earlier by Amanda Goodman.

The event began as students filed out of the building and stood in the high school parking lot, facing Bulldog Drive, where two wrecked vehicles had been brought to the event by J.B. Duke, owner of Duke’s Truck Repair and Towing in Tecumseh and also assistant chief of the Tecumseh Volunteer Fire Department.

As the students watched, Eli Amyx was escorted from his vehicle by Britt, who administered sobriety tests and then snapped handcuffs onto Eli’s wrists and led him to a deputy’s vehicle to be driven away to jail.

Cody and Peyton Donley and Blakely Morrison, the students who portrayed passengers in Eli’s vehicles, sat on the roadside receiving attention from other emergency personnel.

Meanwhile, fire and rescue workers used the “jaws of life” tool to pry off the door of the car where Garrett and Natalie were trapped. Quietly, white sheets were draped over the two teens.

Missouri Department of Conservation agent Jerry Kiger played the role of a law-enforcement officer who responded to the crash only to find that his daughter, Natalie, had “died” in the accident.

As the rescuers worked to get the two students out of their mangled vehicle, an Air Evac helicopter landed a few yards away on the grounds of the Gainesville airport – and the other student-victims’ real-life parents – Julie Donley, Heather Morrison and Nicole Morgan –  arrived at the scene.

Kiger’s heart-rending performance as the grief-stricken father had many viewers in tears – students and adults, alike. As GHS principal Justin Gilmore and Reed held him back, Kiger struggled to get to his daughter as the first responders worked to get the door off the car and remove Natalie’s body from the vehicle. When she was finally laid on the ground, Kiger knelt beside her as grim-faced GVFD first responder Lisa Hoffman lifted the white sheet so that Kiger could give his daugher a good-bye kiss, his face distorted in agony. Clinkingbeard Funeral Home manager Gene Britt and assistant Gier Turned lifted Natalie onto a gurney before wheeling her to the waiting hearse.

Meanwhile, Garrett, who was thought to have “died” in the crash, had also been removed from the wrecked car, and a cluster of EMTs and paramedics from Air Evac and Ozark County Ambulance surrounded the backboard, working determinedly, trying to revive him as another distraught parent, Garrett’s real-life mother Nicole Morgan, urgently called his name and watched anxiously as CPR was begun.

It’s nearly impossible to continue CPR inside the Air Evac helicopter, so, as CPR continued, Garrett was loaded into an ambulance, which left the scene, siren screaming.

Then Garrett was wheeled in, surrounded by emergency medical personnel and with CPR still in progress. A flurry of activity erupted around him, but it eventually ceased when Air Evac 12 director Lacy Robb, acting as an ER doctor, called the time of death.

Another sorrowful scene was played out as Nicole Morgan returned to her son’s side for yet another heartbreaking good-bye.

At the end of the mock-crash portrayal, Robb told the students about her former colleague Tony Thornton, a flight paramedic, who suffered devastating injuries in 2018 when he was driving between Air Evac bases in Mountain Home and Harrison, Arkansas, and was hit head-on by a drunk 17-year-old driver.

Thornton was the only survivor in the crash that killed the teenage driver and his passenger, Robb said. He spent three months in the hospital and is making slow but steady progress in his recovery, but he “probably will never be a flight paramedic again,” Robb said. “He cannot do the job of his dreams.” Then she added, “Imagine that it was you.”

Britt spoke next, telling the students that, in this mock crash, he “smelled alcohol” on Eli’s breath and then administered the field sobriety tests. Drunk driving, a Class D felony, can come with a 15-year sentence, said Britt. “So that walk back to the patrol car was Eli’s last day of freedom for a long time.”

He reminded the young audience that, although this crash was blamed on drunk driving, similar crashes can be caused by any kind of distraction, including texting, “fiddling with the radio,” putting on makeup, talking to backseat friends, a pet, a dropped object or any other thing.

Britt said parents are partly to blame because, “Hey, we want to know where you’re at.”

But he said he’d told his own kids not to answer his texts – or anyone else’s – when they’re driving.

He urged the students to make good choices. In his 23 years with MSHP, Britt said, “For every one bad criminal I’ve arrested, there are dozens, if not more, who are good people who made a bad choice. It’s that one choice you make ... choices have consequences.”

As the students filed out of the gym, some seemed startled to see a casket, topped with Garrett’s and Natalie’s framed photos, waiting in the hallway.

Gilmore said the unfolding of tragic events “had the students’ whole attention, all the way through. I think it made a difference, not just in the kids but in everyone involved. I know it did for me. I try not to use my phone when I’m driving, but a text might come in and I look over at it. Now I’ll think, ‘Nope, not gonna do it.’”

Gilmore said he appreciated the way the local emergency agencies came together to create a learning opportunity for the students. “The key really is, if it just saves one life, I think it was worth it.”

Event organizer Brian Morgan, who works as an EMT for both Ozark County Ambulance and Mercy Ambulance Service in Lebanon, said it took him about a month to put the mock crash together. He modeled it after one that was done in Lebanon, he said.

He hopes to repeat the mock crash at Ozark County’s other high schools in the future, perhaps arranging one mock crash a year, at a different school each year, so that in a four-year cycle all high schools would eventually have the experience.

Morgan expressed thanks to all who participated.