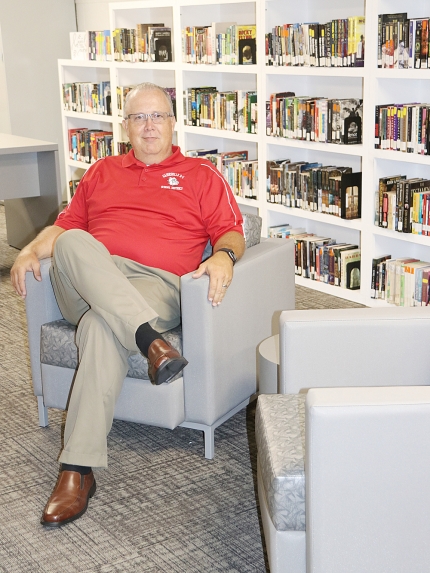 Gainesville Schools superintendent Jeff Hyatt tries out one of the comfortable chairs in the junior/senior high school’s new library center, which adjoins a new learning lab where students can take online classes. 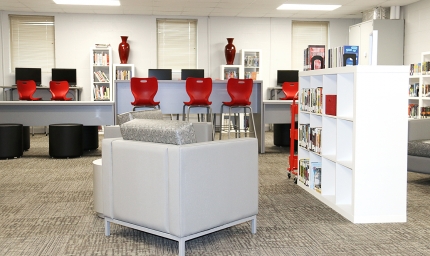 Superintendent Jeff Hyatt says the junior / senior high school’s new library center will be in use seven hours each school day, a change from the two hours of daily use the previous library had. The library center features tables and chairs, book shelves and comfortable “welcoming” areas. The cost of the new library center and adjoining learning lab was covered by a $10,000 donation from the Leroy and Ovia Marie McGinnis fund and a $20,000 Coover grant, both distributed by the Community Foundation of the Ozarks. 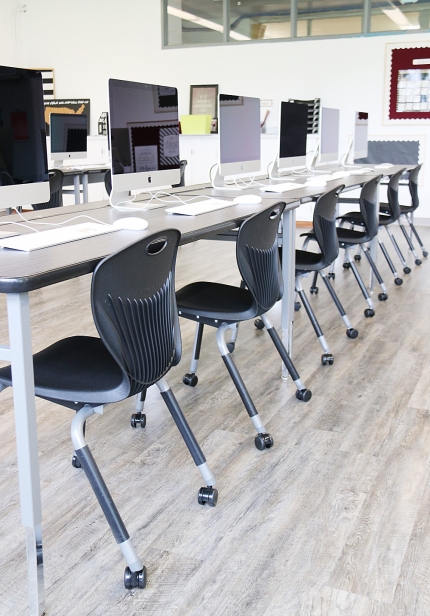 Gainesville High School’s updated business tech lab has all new Apple computers. The updates were paid for by a 50/50 grant with the Missouri Department of Elementary and Secondary Education.

As Gainesville students returned to school Tuesday, they discovered several improvements at the junior/senior high school, including a new learning lab and library center.
“We wanted something different and more modern for the kids,” said Gaines-ville R-V superintendent Dr. Jeff Hyatt.
The new learning lab and library center are much different from the school’s former, traditional library. “The library was previously only staffed two hours a day,” said Hyatt. In contrast, the new library center and learning lab will staffed seven hours a day, he said.
The library and learning center occupy two rooms – one with computers and the other with books, tables and comfortable seating areas – instead of the former library’s single large room. Both rooms have new flooring and furniture.
“We wanted somewhere the kids could relax … [in] a good environment,” said Hyatt. “Some kids have already said this is awesome.”
The learning lab and library were created with the help of two grants, said Hyatt – a $10,000 donation from the Leroy and Ovia Marie McGinnis Fund and a $20,000 Coover grant, both distributed through the Community Foundation of the Ozarks.
Computers in the new learning lab will offer online classes through a program with the Springfield Public School system and a partnership of more than 60 other Missouri schools.
Hyatt said the new library can hold 18 to 22 students, the size of an average class.
“We are trying to improve things and still keep within our budget,” he said. “We will continue to add shelving and books. And we will keep reaching out for additional funding.”
Also new this year is the business tech lab, outfitted through a 50/50 grant from the Missouri Department of Elementary and Secondary Education.
With new flooring and all brand-new Apple computers, Hyatt said the business tech lab is “very modern and up-to-date. Our kids deserve this as much as any kid in the state of Missouri,” he said.
Hyatt also hopes to have Chromebooks available for each junior and senior student. The “1 to 1 initiative” is already completed for students in grades 7 through 10.
Other school improvements were completed by dipping into money reserves, including $150,000 to fix the roof. “But we can only handle that for so long,” he said. “We’ll keep reaching out for grant money.”
The high school’s central office was recently relocated to the old band room after the band room was moved to the end of the hall past the old library. “Now kids don’t have to go out into the elements to reach the band room,” said Hyatt. “Most kids are enclosed now” during class changes.
The central office includes a new room where the school board can meet. That 2,000-square-foot room can also be utilized by the public when no meetings are scheduled.
“I have to say a big thank you to our maintenance and custodial staff,” said Hyatt. “They did wonderful work this summer.”
“We are planning ahead for the future,” he said. Those future plans include new lockers and new furniture for the cafeteria.
But according to Hyatt, much more needs to be done to the school.
“We’ve tried to make as many improvements as possible,” he said. “There is a lot of pride here, but coats of paint can only cover for so many years. We don’t have a lot of the brand-new things larger schools have, but it’s nice to see the pride our students have in what they do have. But we want to make it better for them.”

Updated, expanded preschool
Gainesville’s new preschool facility is now up and running. The new, modular building was recently completed next to the junior high/high school, and new playground equipment was installed last week in the large fenced-in play area behind the building.
The new preschool consists of two classrooms and a multipurpose common area where  the children will eat lunch.
Preschool teachers Brandi Miller and Karen Schlegal and aides Janine Jenkins and Amy Morris said they are excited for the school year to start.
In previous years, Miller said, the preschool would sometimes have only partial days so more students could be accommodated.
“Until this expansion, we could only have 12 to 14 kids at a time,” said Miller. “We were always having to turn people away. Now we can have up to 40 kids.”
Classrooms include several learning stations, a Promethean board (similar to an interactive, touch-screen Smartboard), books and interactive play areas.