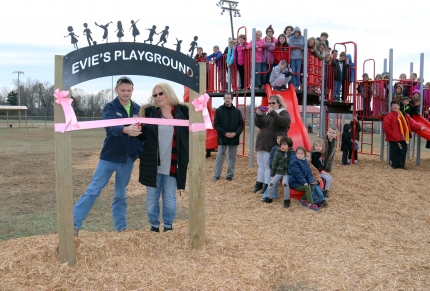 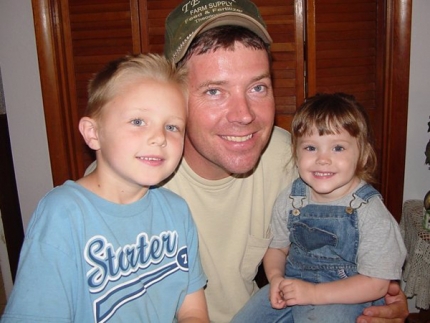 Evie Wray, right, was especially close to her father, the late Thomas Wray, and her brother J.D. Wray, left. Evie, then 8, died March 20, 2008, complications related to an infection of the E. coli virus. Thomas, a well-known member of the Theodosia community, worked at Chaney Monument for 20 years, and later owned his own backhoe business while also working the family farm. He died Dec. 27, 2017, after a seven-year battle with multiple sclerosis. J.D. now works for the Ozark County Road and Bridge Department. Photo submitted. 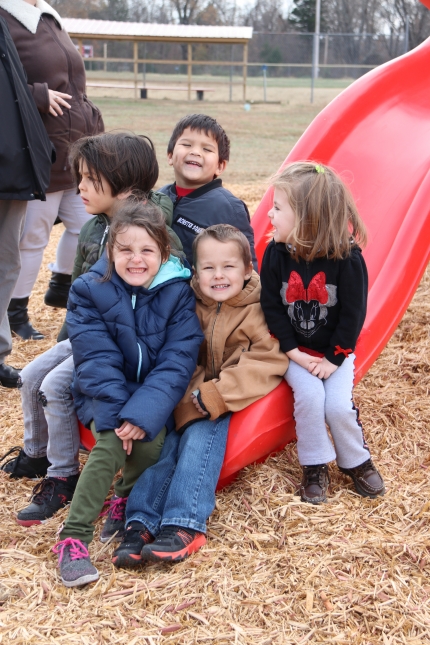 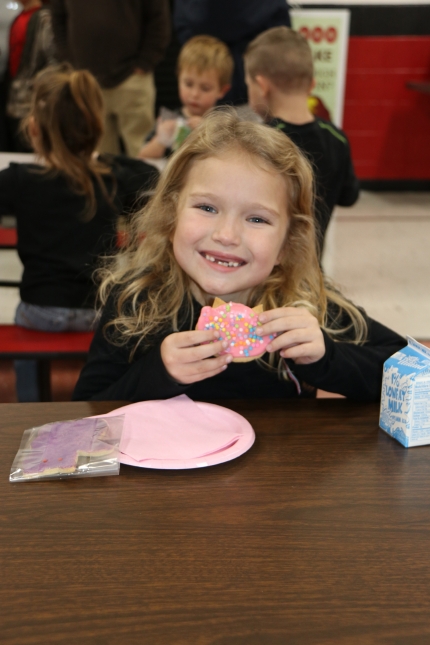 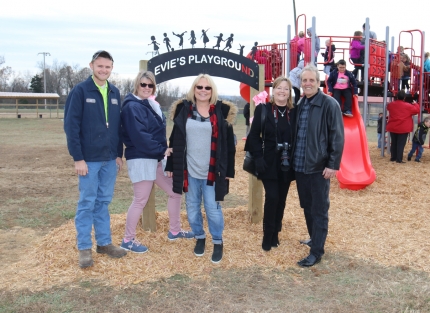 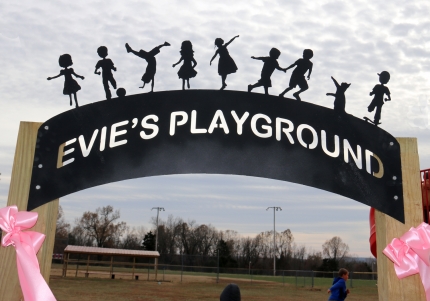 Lutie teacher and IT coordinator Lois Honeycutt designed the sign for Evie's playground. Lutie's ag construction class cut the design out with the school's plasma cutter, painted it black and it was mounted on two posts. Honeycutt knew the Wray family well, including Evie from birth, and served as Evie's bus driver during her years at Lutie Elementary. Times photo/Jessi Dreckman.

On Wednesday, Nov. 28, surrounded by students, faculty members and family, stepmother Nancy Wray and brother J.D. Wray snipped a bright pink ribbon, officially opening Evie’s playground, a new installation of playground equipment at Lutie Elementary School dedicated to the memory of  Evie Wray, an 8-year-old who died in 2008 from complications related to the E. coli virus.

Evie, a spirited second grade student who “was never afraid to be a girly-girl” or to be the “first to jump in the mud,” as her obituary stated, loved working on the family farm with her “partner-in-crime,” brother J.D., and her loving father, Thomas Wray, who died last December after battling multiple sclerosis for seven years. Evie is remembered as a bright little girl who loved the color pink, all animals, especially kittens, and riding her four-wheeler.

As soon as the ribbon fell at the event, applause erupted from the group of students and teachers. Then Lutie superintendent Scot Young announced that the children were free to enjoy the playground they had “been looking at like a wrapped Christmas present.”

Dozens of students took to the new playscape, and soon enough, laughter and happiness filled the air.

“She would have just loved this,” Nancy said, watching the students running and playing on the equipment dedicated to the memory of her stepdaughter. “And it’s such perfect timing too. Tom’s birthday was Saturday.”

In addition to Nancy and J.D., Evie’s aunt Keri Kennedy and another aunt and uncle, Gloria (Wray) and Michael Walker, also attended the ceremony.

“I remember the last time I was here with Evie. She went down the slide on the other playground set then looked at me and said, ‘Can I go down it three more times?’” Gloria said, laughing. “She didn’t want to go down it just once. She loved it so much, she wanted to go down three more times.”

Something worthy of Evie’s memory

Young says the playground equipment is a project that has been “a long time coming.” Shortly after Evie’s death, friends, family and fellow classmates raised $10,000 in the girl’s memory. A few other school fundraisers over the years increased that amount to $14,000; however, when school officials began to research a playground set to purchase with the funds, they weren’t impressed with the available options in that price range.

“Believe it or not, that amount of money doesn’t buy much in terms of playground equipment. I thought if we were going to do this, we really needed it to be something that’s deserving of Evie’s memory,” Young said. “We have a friend of the school who donates money to the school each year. I spoke with him about adding $10,000 to the money that was already raised. He said, ‘Absolutely.’”

With the donor on board and the funding secured, Young worked to find the perfect playground equipment. The set the school settled on features three straight slides, one twisted slide, two sets of monkey bars, a tic-tac-toe board and several other fun features.

After the equipment was picked out, the school worked together in different ways to prepare for Wednesday’s ribbon-cutting ceremony.

Lutie IT coordinator and business teacher Lois Honeycutt, who had known Evie since she was born and enjoyed her kind spirit as her bus driver for several years, started working on the design for the sign that would stand near the equipment. Several ideas were presented while brainstorming, but none seemed quite right. It was Evie’s life itself that provided the inspiration for the perfect design.

“I knew she just loved cats, and she just loved to play and have fun with her friends,” Lois told the Times. “So the design came together with the cat and the kids playing on top.”

The design was sent over to Lutie’s ag teacher, Kathalee Cole, who used the sign as a project for her ag construction class. The students used the school’s new plasma cutter to cut the intricate design from steel. Then the students painted the metal black and secured it to two wooden posts set in the ground with concrete.

When the playground equipment arrived, there was no construction crew included to install it. Instead, Young and Buck Comstock, Lutie’s basketball coach and physical education teacher, got their hands dirty taking on the daunting task of pouring the cement and installing the elaborate equipment. Maintenance employee David Woods helped the superintendent and coach until he broke his hand during the construction process and, as a result, was unable to finish the job.

As the day of the ribbon-cutting ceremony approached, students in Christi West’s home economics class, along with Young’s wife, Rosanna, and teachers Misty Souder, Rebecca Scott and Brenda Johnson, used their culinary talents to bake 250 cat-shaped cookies iced with pink and purple frosting for the students to enjoy after the dedication ceremony.

“It really was a group effort,” Honeycutt told the Times. “We all pitched in, and a lot of people worked on this project in different ways.”

All the hard work paid off last week when Lutie School came together, welcoming Evie’s family with open arms to remember one of their own.

Young posted on the Lutie School Facebook page that the donations from Evie’s family and friends, the Theodosia community and the donor’s gracious gift “instantly produced a hundred or so smiles from our children…”

Those smiles were proudly on display as the kids ran, jumped, slid and hung from the new playground equipment Wednesday afternoon. In the melody of the students’ laughter, one could imagine little Evie taking her turn on the slide then asking,”Can I go down it three more times?”