Large crowd turns out for student-led Fields of Faith 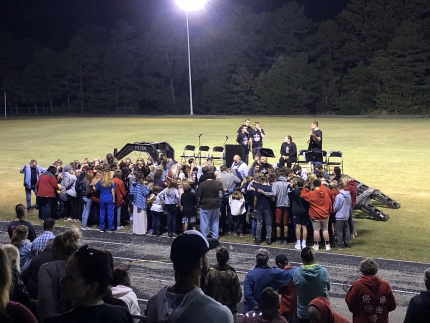 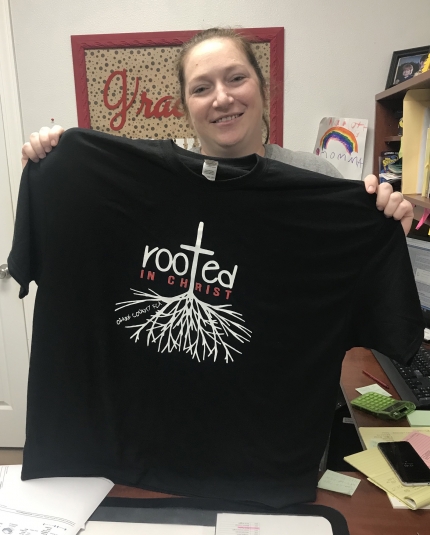 Photo by Norene Prososki Gainesville FCA chapter huddle coach Ericka Armstrong shows one of the T-shirts that were sold during the Oct. 9 Fields of Faith student-led worship service.

It was the second year that Gainesville’s Fellowship of Student Athletes (FCA) hosted the event. This year, the students extended an invitation to area churches and to FCA chapters from other Ozark County schools. The response was impressive. “Both Lutie and Bakersfield schools sent their FCA members on buses,” said Gainesville FCA chapter huddle coach and junior high principal Ericka Armstrong. “Frontier Baptist, First Baptist and Mammoth Assembly all regularly run youth buses on Wednesday nights, and they brought the kids to the field instead of church.”

The evening was planned and executed by Gainesville FCA members, who meet each Wednesday morning before school. Lance West serves as the chapter’s adviser with help from “huddle coaches” Ericka Armstrong, Johnica Hanke and Misti Eslinger. “We have between 40 and 50 kids every Wednesday morning, which is awesome,” Armstrong said. “I love FCA; I’ve been a part of it everywhere I’ve been. I came from Marshfield most recently, and we had a huge Fields of Faith there.” Armstrong and Haenke suggested holding the event in Gainesville last year, and the student members enthusiastically took over planning the first one, which was held on the baseball field with around 200 people in attendance.

This year, members changed the location to the football field so there would be more seating, and they started getting the word out early to Ozark County schools and churches. Those attending enjoyed food and fellowship beginning at 6 p.m.

“There were a ton of people who helped,” said Armstrong. “Without them, it just wouldn’t have happened. It was great to have so many of our churches involved. That’s the difference maker right there. It was non-denominational, so every church and everyone in the community was invited. It was outstanding to see the stands full.”

Lutie’s FCA chapter members served the food. “What a blessed night!” said Lutie chapter adviser Misty Souder. “Thank you to Gainesville FCA for putting it all together and letting us be a part of it. My students loved it and can’t wait until next year.”

The student-led service, emceed by Landry Jenkins,  started at 7 p.m. with worship songs by Liv Milligan, Ella Barber and Silvana Sherrill, followed by testimonies from Macray Hambelton, Mallory Strickland and Kalen Hoffman. After a song by Emory Warden, Mammoth Assembly of God youth pastor Lain McCanless gave the message, “You matter. You are loved.”

Gracyn Blackburn closed the service with a song, followed by an altar call led by First Baptist pastor Mason Eslinger while student musicians Maddox Wynn, Brady Myers and Corwin Morris played background music on their guitars as local pastors prayed with those who came forward.

“The event let the kids show their strength,” Armstrong said. “Without them, nothing would have mattered. Lain and Kalen were the only two adults who walked on stage Wednesday night. Everything else was completely student led, completely student motivated. The kids who sang and testified were on a voluntary basis. They were amazing. The biggest thing for us is for these kids to realize how strong they are, how important their message is. As adults, we can say, ‘You should totally check out Jesus; he’s pretty cool,’ but when it comes from a peer, it’s completely different. All we adults have done is empowered them to live their very best lives for Christ.”

McCanless, the night’s speaker, said, “Fields of Faith played an important role in our community. Not only did it give students a chance to lead; it also gave them an opportunity to share the story of what God is doing in their lives. Everyone deserves to know that they are loved and that they matter, and I think an event such as Fields of Faith reminded everyone that the Author of Life is writing their story.”