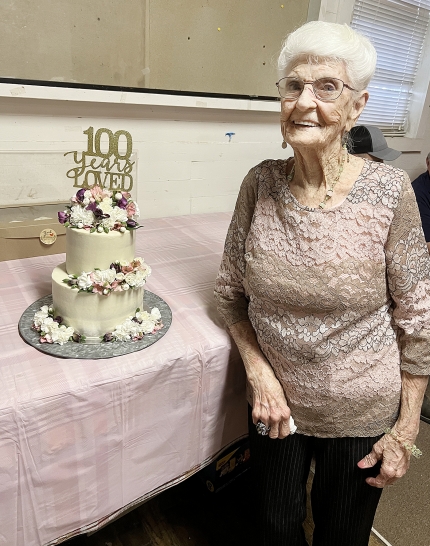 Lena Blanche Tackitt Langston Harden stands next to her birthday cake proclaiming that she is “100 years loved” Friday at the Caulfield Community Building. Dozens of family, friends and well-wishers turned out to help her celebrate. 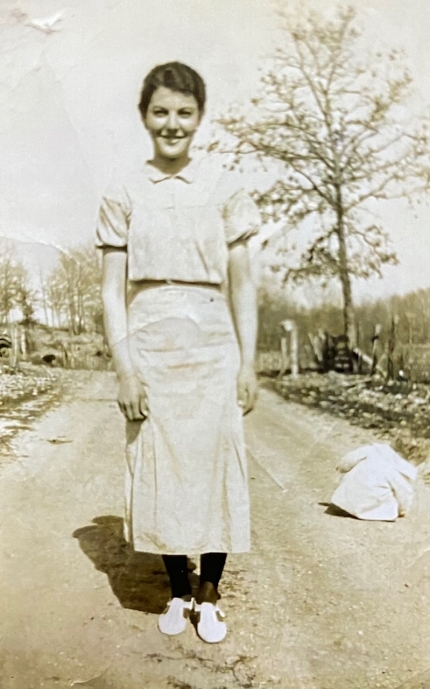 Blanche was photographed here when she was 14, sometime around 1936.

“Aunt Blanche” as she is lovingly called by dozens of family and friends around the Caulfield and Elijah area, celebrated her 100th birthday with a big party at the old Caulfield Community Building Friday night.

She has outlived two husbands and nine of her siblings. Her younger brother Billy Joe Tackitt is her lone surviving sibling. Of course Billy Joe was there, along with dozens of other family and friends to celebrate “100 years of being loved” as her cake so perfectly stated.

Blanche told partygoers that instead of singing happy birthday to her, she wanted to sing some old gospel hymns. No surprise, seeing that she has been a member of the Elijah Church of Christ for 87 years and was baptized in Bridges Creek next to the church by Elmer Butler when she was very young.

So the packed community building roared with an acapella version of “If We Never Meet Again (This Side of Heaven).”

Blanche wiped a tear away as she sang along. The group followed up the gospel singing with a cheerful rendition of “Happy Birthday to You.”

Blanche and her first husband Elbridge, who died in 2000, were business and community leaders in Caulfield in the early days of the community. They were actively involved in the community association and local businesses. Blanche remarried in 2003 to local Richard Harden, who passed away in 2009.

“Everybody was there at Blanche’s party,” a family member said. “It was like a big old Caulfield reunion from years ago. Blanche just loved it.”

Blanche’s parents traveled in a covered wagon in the late 1800s from Oklahoma to Arkansas before finally settling in Elijah where they raised their family. Her father’s family homesteaded land in the Elijah area in the 1800s.