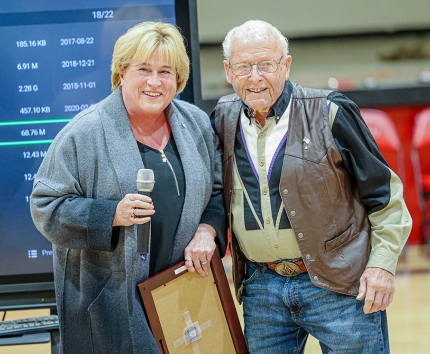 The “popcorn man” Bobby Grisham was presented with a 2021 Senior Service Award on behalf of Missouri Lt. Gov. Mike Kehoe for his volunteer work selling popcorn to raise money for area schools. Grisham was presented the award by Sen. Karla Eslinger, who also nominated him for the award. He was one of only 10 people in the state to receive the award.

Affectionately known as “the popcorn man,” local resident Bobby Grisham was recognized with a 2021 Senior Service Award, presented by Missouri Lt. Gov. Mike Kehoe, for his many years of service to the community, particularly raising money for local schools.

Grisham earned the name “the popcorn man” by selling boxes of microwave popcorn and peanuts at ball fields and local gymnasiums for years on behalf of the Robert Burns Masonic Lodge Hall in Gainesville.

The money raised has been double- and triple-matched by the Masonic Home of Missouri, through its Creating a Partnership Program, which benefits children. Over the years, the Gainesville Lodge, with a lot of help from Grisham’s popcorn sales, has provided nearly $40,000 to Ozark County schools.

Grisham humbly accepted the award during a ceremony Jan. 4, at a Gainesville High School basketball game. Sen. Karla Eslinger, who nominated Grisham for the award, was on hand to present it to him.

In her nomination letter, Eslinger wrote: “Bobby’s dedication to the community and passion for service, especially to the youth of Ozark County is unwavering which has been demonstrated through his activities as a volunteer.”

The Senior Silver Service award, which was enacted in 2005, promotes and highlights the contributions Missouri’s senior citizens provide their local communities.

Grisham, who will be 89 in May, said he was humbled by the recognition. “I’m sure they could have found someone more deserving than me,” he said. “The ones who really need recognized are all those people who buy the popcorn and peanuts,” Grisham added.

“It’s all about those kids,” Grisham continued. “It’s really been a blessing to be able to help those kids. I think the good Lord had a hand in this.”

Grisham also credits his fellow Masons who pick up and repackage the popcorn for the sales and those who work the ball games at Gainesville and Dora. “They deserve just as much recognition as me,” he said. “They work hard.”

During the presentation, a special video was played from Missouri Lt. Gov. Mike Kehoe, with Kehoe telling Grisham that its volunteers like him that help make Missouri a great place to live.

Just recently, $3,000 checks were presented to Gainesville and Dora schools on behalf of the Gainesville Lodge.

If you would like to help partner with the program, make checks payable to the specific lodge, noting “Creating a Partnership” and the designated school’s name on the memo line, and send to Grisham (P.O. Box 223, Gainesville, MO 65655) for Robert Burns Lodge in Gainesville or to Royce Wheeler (P.O. Box 265, Bakersfield, MO 65609) for Bayou Lodge in Bakersfield.

Donations to Sampson Lodge in Theodosia may be mailed directly to the Lodge at P.O. Box 301, Theodosia, MO 65761. Remember to note “Creating a Partnership” and the designated school name (Lutie, Thornfield or Mark Twain) on the memo line.

Or you can always pick up a few boxes of popcorn from the “popcorn man” himself next time you see him at a ballgame.