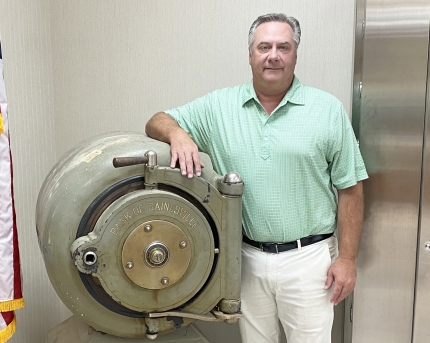 Century Bank of the Ozarks CEO Chris Harlin is pictured with the antique cannonball safe that was purchased by his family five generations ago when the original Bank of Gainesville opened in July 1894. 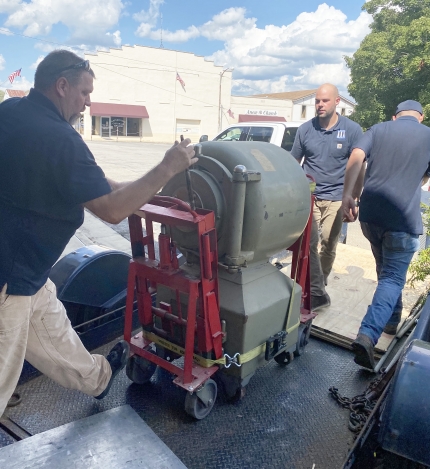 Workers from Bankers Security, a Kansas City company specializing in bank safes and vaults, works to load the heavy 1894 cannonball safe onto a trailer for transport across the square to Century Bank’s lobby. 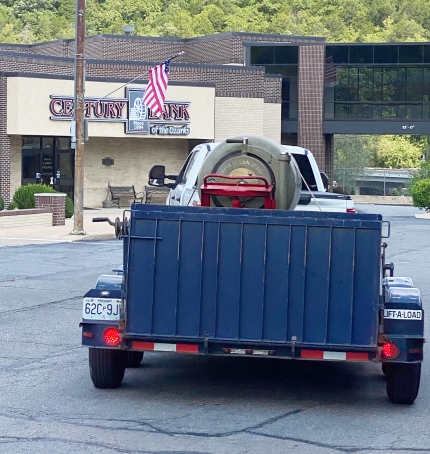 The antique safe, originally brought here from West Plains by Joe Farmer’s team of horses and a wagon, heads to its new home. 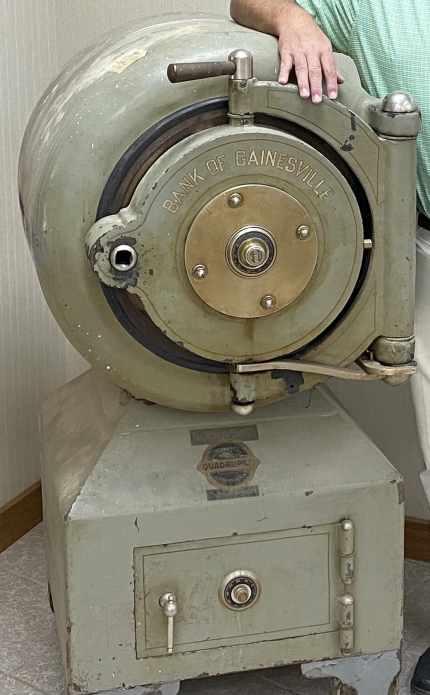 Century Bank of the Ozarks’ antique “cannonball” safe, originally brought from West Plains by Joe Farmer’s team of horses in the summer of 1894, was moved to the bank’s current lobby from its resting place in the bank’s old building on the west side of the square on Monday, Sept. 13. The safe hadn’t been outside since 1929, when it was moved from the  bank’s original small, wood-frame building next door that had been home to Bank of Gainesville since it opened on July 24, 1894, with a then-impressive $5,000 in capital.

In 1929, the bank built a new location next to what is now Bouquet Palace (formerly Old Ford Market), with a rock exterior and solid marble teller cages inside. The safe has been sitting inside the original bank vault since then.

In February 1969, the bank started construction on its much larger building on the northeast corner of the Gainesville square and soon moved into the new building, leaving the cannonball safe behind in the old bank.

The bank changed its name from the Bank of Gainesville to Century Bank of the Ozarks in 1996 after purchasing Douglas County National Bank in Ava.

After using the west-side building as storage for many years, the old bank was sold in 1995. The Harlin family re-purchased the bank, with the old safe still inside, in July 2020.

It was quite a struggle to get the safe to Gainesville, as recorded in the July 5, 1894, edition of the Ozark County News, which reported, “The officers of the Bank of Gainesville complimented Joe Farmer Saturday evening on the pulling qualities of his team of horses. They pulled the bank safe from West Plains, which, with the wagon and framing, weighed between 44 and 45 hundred. The compliment was merited, for there are few, if any, other teams in the county that would have drawn the load.”

Century Bank of the Ozarks CEO Chris Harlin said it was quite a struggle to move the safe last week, too. A team of workers from Bankers Security, a company that specializes in safes and vaults, arrived Monday morning, and after several tough hours, got the safe moved to its permanent location in the bank’s modern lobby on the northeast corner of the Gainesville square.

The antique safe will be on display next to the bank’s vault for anyone who would like to see it.

“I feel like Johnny, Jim, Tan, Hugh Tan, Billye, Madge and all the folks associated with the Bank of Gainesville and Century Bank of the Ozarks would be thrilled to see that we have brought a piece of our past into our present,” Chris Harlin said.