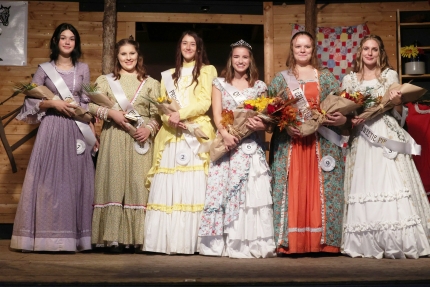 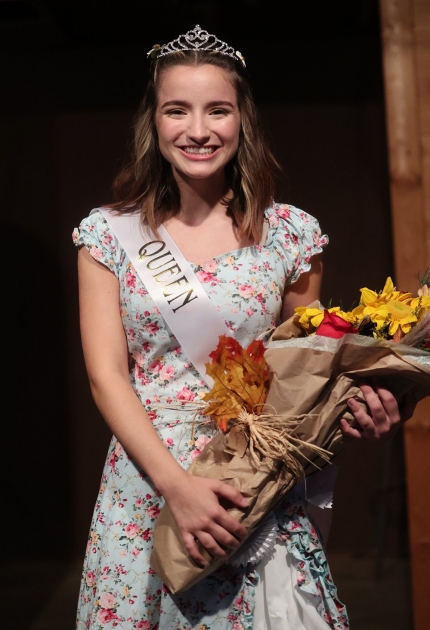 As Gainesville returned to its normal hustle and bustle of everyday business this week, locals and visitors alike are reveling in the memories made around the quaint square during the 61st Hootin an Hollarin festival, held Sept. 15-17.

This year’s festival had an exceptionally large turnout, with crowds circling the square each day of the 3-day festival, and almost every single festival event had increased participation.

“I thought we did all we could do to make it fun for the kids and people of all ages. We had more old-time demonstrators, which was a goal of mine. In addition to our traditional bluegrass and old country bands, we also brought in some new bands with high-energy, newer country music to help attract people of all ages,” said Paula Rose, who stepped in the main Hootin an Hollarin committeewoman position for the first time this year, following in the footsteps of longtime festival organizer Nancy Walker.

The event kicked off Thursday night with an official festival welcome by Gainesville Mayor Gail Reich, followed by a performance of the National Anthem by Jessica Suit. Regan Blackburn then took the stage for a fiddle performance.

The headline Thursday night band was the Kattie Laney Project, who returned to the Hootin an Hollarin stage this year after their debut performance at the festival in 2019.

The annual queen pageant was next on the schedule, and festival-goers flocked to the east side of the square to watch. This year’s pageant included 12 contestants.

The girls began the show with a square dance performance, then each participant took to the stage to answer two questions. The first question was assigned to them the night before the pageant, allowing them to have time to think through an answer. The second question was a surprise, asked on stage by festival emcee Becki Strong, who organizes the pageant with co-director Jerri Sue Crawford.

Olivia Milligan, who was crowned the 2022 Hootin an Hollarin queen, was first asked about the large influx of new residents who have moved to Ozark County. “Why do you think they’re making their homes here?” Strong asked.

“I don’t know about you folks, but I think the Ozarks are just about the most beautiful place on earth,” Milligan said, explaining that she believes the beautiful lakes and rivers and other outdoor spaces attract many people to Ozark County.

“I think that could be a really big reason why they come this way. And you know what? We’ll take them!” she said. “There are so many recreational opportunities to be enjoyed... not to mention they can get away from the hustle and bustle of the big city.”

Milligan said she also thinks being within driving distance to Branson is also a drawing factor. For her second question, Strong asked, “I see that one of your hobbies is working... really?”

Milligan said that she works at Fritz Adventure, an indoor theme park in Branson, and she loves her job. She said that its one of her favorite places on Earth.

“It’s a lot like the Ozarks and Gainesville itself. You have this awesome community and amazing people and amazing workers... Branson is that way too. Fritz’s Adventure is just about as good as it gets, as far as jobs go.”

Then Paula Rose introduced this year’s Hootin an Hollarin parade marshal and fiddler extraordinaire, H.K. Silvey. While on stage, two of his former students, Casey Ritchie Overturf and Brett Dudenhoeffer, played a few songs to honor him.

The judges handed over their decision, and Strong read the winning titles from the stage.

The annual quilt show opened its doors at 5 p.m. and was open throughout the festival for quilt viewing. Organizer Lily Branco said this year’s festival had increased participation with a total of 35 quilt entries. There were also several beautiful vintage quilts on display that were not judged. The best in show ribbon went to Emma Thayer from Kansas City with her hand embroidery. Charlotte Taylor’s king sized sampler received judges choice, and the people’s choice award went to Barbara Luna with her “Easy Carpenter Square” quilt pattern with a star in a star.

Friday’s festival kicked off at 11 a.m. with a performance from this year’s stage band, Come What Mae, featuring Casey Overturf, Jehiel Hoffman and Dee Hoffman.

At the same time, the first round of the annual terrapin race kicked off in front of Shelter Insurance where a surprising 20 kids showed up, turtles in hand, ready for the competition. Organizer Doug Hawkins said that to accommodate the big turnout, they held three heats and a final competition of the race in which kids stand in the center of a circle, laying their turtles down on the pavement to “race” to the outer edge of the circle. First place went to Emeree Hardison with turtle “Kermit,” second place went to Rowyn McKay with her turtle “Larry” and third place went to Liam Cullen with his turtle “Turbo.”

At noon, “Cowboy Rick” Hamby and “Arkansas Bev,” who visited with festival goers at their authentic 1880s stagecoach parked near the main stage bleachers throughout the festival, took to the stage to host an American trivia show that was live broadcast on KUKU 100.3.

Just prior to the game, the 2022 Ozark County Farm Family, Cole and Kristy Suter and their children Conner, Lance and Timber, were recognized on stage by Ozark County Extension Council member John Steffensen.

Around the same time, gazebo pickin’ kicked off at the gazebo on the northwest corner of the square, playing old-time tunes for those passing by. The music, headed up by square dance musician Kim Lansford, continued throughout the afternoon.

At 2 p.m. Friday, emcee April Luna introduced the 2022 Lil Cedar Pete and Lil Miss Addie Lee contest where 16 participants (five boys and 11 girls) entered the competition, a big increase over the five competitors at last year’s festival. The kids, all age 4-5, took a turn to walk to the microphone and answer questions asked by  Luna. Timber Acklin was named Lil Cedar Pete and McKinley Thomas was named Lil Miss Addie Lee. Timber, 4, is the son of Patricia and Rockie Acklin. McKinley, 4, is the daughter of Markus and Ashley Thomas.

At 4:30 p.m., the band Stringed Union took the stage, followed by a 6 p.m. performance by Debra Bolen.

At 5 p.m., people lined the west side of the square, and the infamous bed- and outhouse-on-wheels were pulled out from storage and dusted off for the annual races.

The outhouse race was next up, and six teams entered the race, which had four teammembers situated on the outside corners of an outhouse, and one teammate sitting inside. The run started at City Hall, and the team had to push the outhouse to the other end of the street in of Molly’s Salon and Boutique, where they steered around an orange traffic cone, switched out the rider with one of the pushers and continued back to City Hall to the finish line.

In the same vein, second place in the outhouse race went to the second-place “Dilly Dilly” bed race team, who retained the same team members but changed their name to “Dilly Dally” for their big outhouse push.

Friday night ended with the Isaac Kenneth Band taking the stage, followed by another round of square dancing.

While the 5k was in progress, shooters and archers gathered on the grassy side of the Barney Douglas Memorial Bridge across Highway 160 from the square for the annual shotgun and archery shoot. See page A2 for details on those matches.

At 10 a.m. the annual pet show kicked off with a huge showing with 23 pets being entered, almost double that of last year’s participation in the event. Tyler Osborn won best in show with his huge Watusi steer, Redman. Tyler and Redman hung out near the main stage bleachers Friday and Saturday, and many attendees took photos and visited with the pair.

The pet show was followed by another festival favorite, the costume contest. The event, which was held for the first time on Saturday morning instead of Friday afternoon this year, had 32 entries. Reigning “best in show” champions Landon and Brynlee Johnson, children of Laramie and Brianna Johnson, took home the big trophy again this year with their “Hillbilly Cookout” costume, which featured an old fashioned cook station with campfire.“We used the kids’ Radio Flyer wagon as a base and covered it in a couple pallets that were weathered to get the old-time look. We worked on it a couple nights after work,” Brianna told the Times. “It helps to have a husband who has a mind for all my crazy ideas.”

As the costume contest was being conducted, the inaugural cornhole contest began. The event was held this year for the first time in place of the annual horseshoe competition in hopes of having better participation. And that it did - 10 times the number of participants! A whopping 32 players turned up for the cornhole tournament, compared with only three horseshoe-pitchers last year.

There were 17 pies entered into this year’s pie baking contest, held at 11:30 a.m. Saturday at Shelter Insurance. Tecumseh resident Donna Nasr, who owns the Warrior2US retreat for veterans, first responders and other emergency workers, entered a “very berry pie” that wowed the judges, and she walked away with the grand prize trophy. Shari Turner took first place with her Midnight Berry Pie. A close second was Bev Utchman’s Skillet Caramel Apple Pie. Riley Williams took third place with her Caramel Apple Pecan Pie.

A new magic show was held at Shelter Insurance following the parade, where “Randy the Magic Guy” gave an engaging and funny performance to a packed house of children.

Another round of old-fashioned kids games was held on the courthouse lawn Saturday afternoon.

Come What Mae, the Ridge Runner Cloggers and Eastern Heights rounded out the music, before one last night of square dancing.

“I thought it was a great festival, and there was a great overall team effort that led to its success,” Rose said, complimenting the Hootin an Hollarin committee and event organizers. “We had all these great volunteers who helped set up with FFA, and the FFA and FBLA who came in Sunday to clean up. It truly is a community-wide effort. I hope it continues that way for another 61 years,” Rose said.

See B1-B8 for Hootin an Hollarin event winners. Thousands of photos and videos are on the Times’ Facebook page. The best way to view the photos is to visit the page and click photos. Click “See all” under the Albums title and then navigate to the event.