Blood-covered, rake-wielding man reportedly slams his truck into another man’s truck, throwing the passenger out 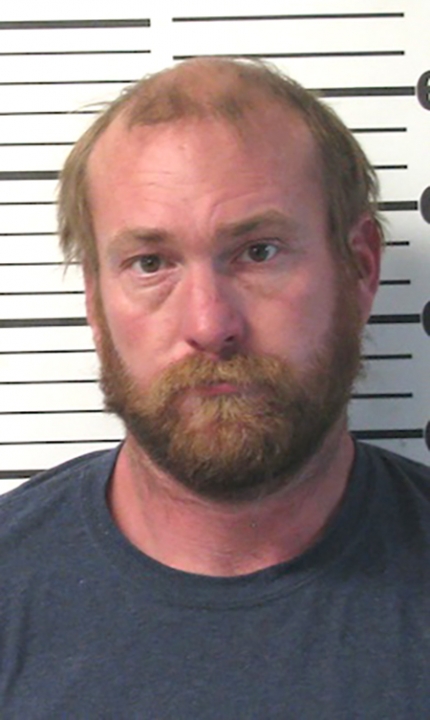 Hunter Jack Black, 36, of Bakersfield, was scheduled to appear before Associate Judge Raymond Gross at 11 a.m. today, May 5, for a bond hearing in connection with an April 22 incident in which he is alleged to have slammed his truck into another man’s truck, causing one man to be thrown out of the passenger’s side. Black is also charged with physically assaulting a woman who was reportedly attempting to run away from him before and after the incident.

Black, who has been held in the Ozark County Jail without bond, was arraigned April 23.

A report of a ‘physical altercation’

According to the probable cause statement, at 5 p.m. April 22, Ozark County Sheriff’s Deputy Sgt. Kyle Hannaford was dispatched to County Road 593 and Highway O in the Bakersfield area after a report of an altercation there.

Allen Luebbert, who had called the OCSD dispatch office, said he was in a fight with Black, and Black had already left the area.

Luebbert reportedly said he didn’t want to press charges about the fight. Instead, he would like an officer to take a report about property damage to his truck that occurred as a result of the altercation.

Covered in blood, swinging a rake

OCSD Deputy Jeffrey Lane, who also responded to the scene, took a statement from Luebbert, who reportedly told the officer that Black had rammed his vehicle during the incident.

Luebbert said the events unfolded when he noticed a white one-ton dually truck was completely in his lane on O Highway. He said he’d reduced his speed as he met the oncoming truck, which stopped on County Road 593.

Luebbert pulled his truck in behind the white truck and got out of his vehicle, he said.

Black, who was “covered in blood,” then got out of the other truck with a rake and started swinging it at him, the report says.

When Luebbert saw Black, he said he turned around and started walking back to his truck.

At Luebbert’s retreat, Black also got back into his truck, he said, and drove the truck forward down the county road some distance and then put the truck in reverse, giving the vehicle gas and slamming into Luebbert’s truck, pushing the truck from the county road back into the highway. Luebbert said the impact occurred  very close to where he was standing, and he was almost hit by Black’s vehicle.

Luebbert said the damage to the truck totaled more than $3,000.

A victim almost run over

Newt Souder, a passenger in Luebbert’s vehicle, also told the officer that he’d seen Black get out of the truck, grab a rake and start swinging it.

Souder said Black then got into his truck, pulled forward some, then put the truck in reverse and slammed into Luebbert’s truck while he was inside, causing him to fall out of the truck and almost get run over by the vehicle as the truck was pushed backward.

After the impact, Souder said, Black drove away.

A woman who kept trying to leave

Alicia Vandriver, who was reportedly with Black in his truck at the time of impact, arrived back on scene as Hannaford was talking with the people involved. She agreed to fill out a voluntary statement, the report says.

In her statement, Vandriver said she and Black had gone to Luebbert’s residence. Black went inside, she said, but she stayed outside. When she heard shouting coming from inside the residence, she decided to leave on foot.

Black drove down the driveway, yelling at her once he’d realized she had started walking away, she said, and he almost ran her over with the truck. She got back into Black’s truck, and he started yelling at her and hit her in the side of the face, the report says.

Vandiver said while she was in Black’s truck, they met Luebbert and Souder on O Highway and stopped on County Road 593.

She said Luebbert came back to their area to speak with Black, but she didn’t know what the men said.

She said she tried to leave, but Black got back into the vehicle and took off.

He then reversed the truck, purposefully hitting Luebbert’s truck, she said, and a man sitting in Luebbert’s passenger’s side, later identified as Souder, fell out of the vehicle.

Black reportedly chased her until he had her on the ground.

She said that, thankfully, another person showed up at the field, and she was able to get into their vehicle and leave.

Black’s side of the story

At 11:14 p.m. that night, a family member brought Black to the Ozark County Sheriff’s Department to speak with Hannaford about the incident. He was read his Miranda rights and agreed to tell the officer what happened.

Black reportedly said he’d gone to Zastrow Drive in Bakersfield and “slapped a guy around for getting his girlfriend high,” the report says.

Black said on the way back home, he’d gotten rear-ended in his truck and then “went back to work.”

Black is charged with four felonies in connection with the incident: two counts of assault for attempting to cause physical injury to Souder and Vandiver, one count of property damage for slamming into Luebbert’s vehicle and one count of leaving the scene of an accident with damage exceeding $1,000.

Each charge could carry a sentence of up to four years in prison if Black is convicted.

Century Bank of the Ozarks CEO Chris Harlin is pictured with the antique cannonball safe that was purchased by his family five generations ago when the original Bank of Gainesville opened in July 1894.