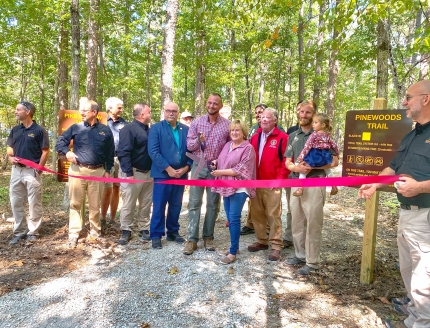 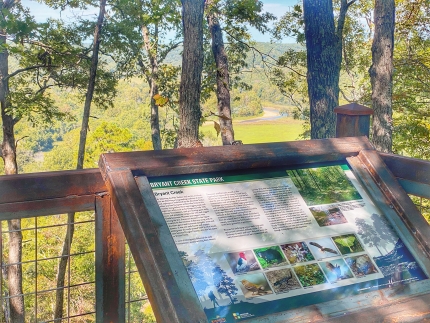 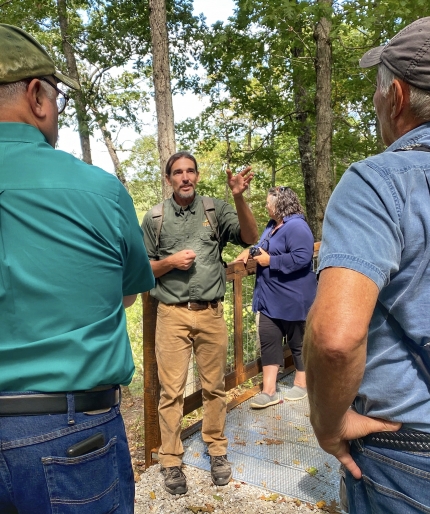 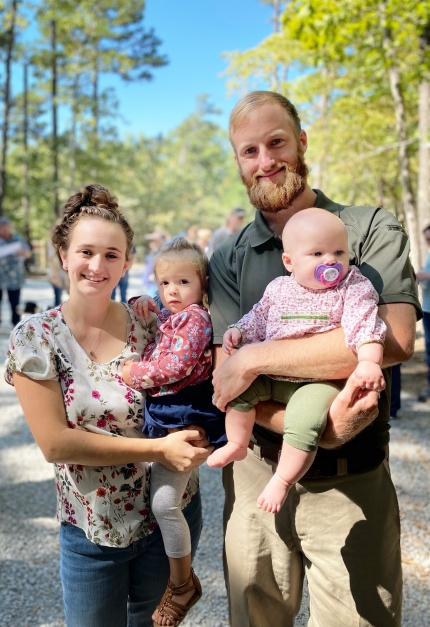 During a ribbon cutting ceremony Sept. 23 at the newly opened Bryant Creek State Park on N Highway, a couple miles north of Rockbridge, Missouri State Parks Natural Resource Program Director Ken McCarty said the 2,900 acres are some of the most spectacular and diverse in the whole state park system.

“For the past 36 years, I’ve been involved in all things natural at all parks, and it could be said that I’ve been up and down very nearly every hill and hollow in the whole state park system. You can imagine with that kind of background, how often I’m asked, ‘Well, what’s your favorite?’ My usual response is if you really press me, I can probably give you my top five. But really, it’s kind of the one I’m at. However, I can say truthfully today that the standard answer has been challenged here. If you were to ask ‘what is your favorite state park?’ I would say here,” McCarty told a group of about 50 people at the ceremony. “It’s been quite a privilege [for] myself as well as the others to work through the development of this park.”

McCarty said he was the one who said “this is the place” when the opportunity came to secure land for a state park in this region of the state. The land was officially purchased in 2016, and McCarty said he’s worked with it since that time.

Currently the park is open from sunup to sundown and includes two parking lots, a vault toilet, a 4.5 mile looped “Pike Hollow Trail” and a .6-mile “Pinewoods Trail.” The Pinewood Trail is currently made of natural material but will be paved in the future to make it compliant with the American Disabilities Act and accessible to those in wheelchairs.

The Pike Hollow Trail includes a trail rating of “rugged,” and its estimated hiking time is 4.5 hours. The state park describes it as this:

“On wet days, water can be seen dripping from mantles of mosses, lichens and ferns. Many species of plants - some uncommon or even rare - cling to these moist sandstone walls.

“Banks of green plants come alive in spring rains and add patterns of green to the summer woods. The plant life along the trail harbor forest insects and occasional salamanders or frogs.

“In the winter, icicles sometimes cover entire ledge expanses, and ice waterfalls grow where water seeps from the rock.

“Rugged and diverse river hills lead from the Gainesville Plain to Bryant Creek itself, 400 feet in elevation below. The deep relief of the landscape and complex geology are what lead to the remarkable abundance and variety in the park’s plant and animal life.

“With 940 kinds of plants, the park preserves more wildflowers, shrubs, trees and other vascular plant species than any area of Missouri yet studied, encompassing within these 3,000 acres nearly one-third of Missouri’s total known flora.

“The hills and bluffs through which the trail winds contain extensive groves of shortleaf pine - Missouri’s only native pine tree.

“There are at least 60 kinds of mosses, liverworts and hornworts documented, and more species of lichen have been discovered at Bryant Creek than in all but one other Missouri State Park.

“The small cavities and overhangs of the sandstone ledges provides shelter for many animals such as black bears, bats, eastern woodrats and bobcats.

“Nearly 70 kinds of forest, woodland and shrubland birds are known to nest in the park, and many more pass through during spring and fall migrations.

“This trail was built with the assistance of team fire 1 of AmeriCorps NCCC, a full-time service program allowing young adults ages 18-26 to serve in communities across the country gaining valuable leadership skills.”

The .6-mile Pinewoods Trail is described this way:

“Pinewoods Trail leisurely leads visitors through the narrow ridge-top covered in native pine, just to the edge of the rugged drop off to the sandstone geography below. This 0.6-mile trail is a great way to see Missouri’s only native Shortleaf Pine.”

The two current trails, which are open to hiking only, the parking lots and vault toilet are located on the north side of N Highway. The highway dissects the park into two sections. During the ribbon cutting, park staff led guests on a guided hike of both open trails.

Missouri State Parks Director David Kelly explained at the ribbon cutting ceremony that phase two of the development of the park will be underway shortly.

“The [Missouri State Park] staff really came together. We found a little money to get this first phase open. We’re really opening this about a year ahead of schedule - this first phase, and we’re happy that we’re able to do that,” Kelly said. “...There’s been $600,000 approved to now do the second phase.”

Phase two of the project includes creating another day-use area in the other part of the park, which lies south of N Highway, and creating mutli-use trails there that can be used for hiking, horseback riding or bicycling. Phase two also includes work expanding the hiking-only trails to include a longer backpacking route and other day hiking options.

Phase three will include creating a primitive camping area, likely on the north side of the park.

“These will be primitive tent camping sites, likely a short hike from the parking lot. These will not be RV sites or anything like that,” a park official clarified. When asked, he said the sites will likely have a picnic table, fire ring and lantern post but no other amenities like electric or water hook ups.

Phase three will also be when the Pinewoods Trail is paved, and park staff plan to create additional trailheads if enough interest and use warrants them.

McCarty said that an area north of N Highway and east of the camping and day use area has resource characteristics potential for a designated “wild area,” a large undeveloped area within a Missouri State Park that is managed as wilderness “for solitude and primitive recreation.” McCarty said staff are looking at designating about 1,200 acres within Bryant Creek State Park as a wild area.

There is also the potential for an equestrian through-trail  to connect the park to both Assumption Abbey monastery in Douglas County and Rockbridge Rainbow Trout & Game Ranch, a 2,000-acre resort located in Ozark County about two miles away.

To find out more about Bryant Creek State Park visit https://mostateparks.com/park/bryant-creek-state-park or visit the park. The park’s entrance is located on N Highway, near Rockbridge, in Douglas County 1.8-miles from the Ozark County line.