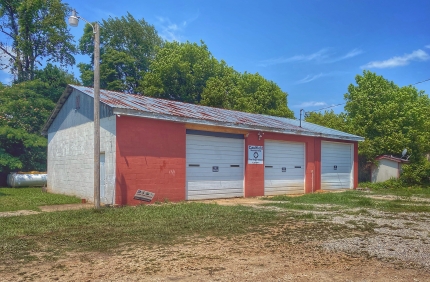 The current Caulfield Volunteer Fire Department firehouse, shown here, will be removed in the coming months to make space for a new, larger firehouse that will be built as part of a $500,000 grant-funded project. 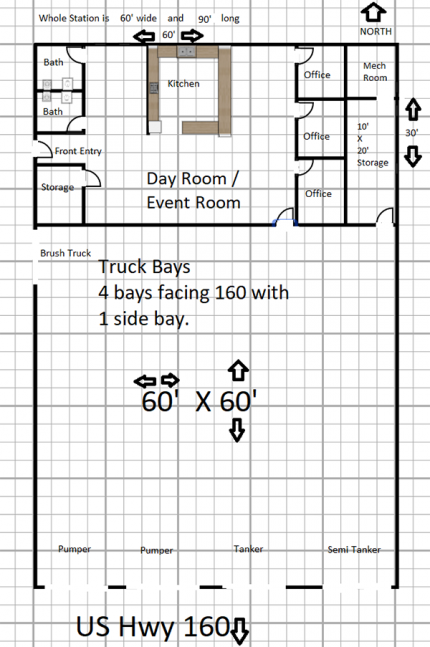 Plans for the new firehouse The plans for Caulfield VFD’s new firehouse include a 60-by-90-foot structure, nearly double the size of the current firehouse. CVFD fire chief Shannon Sisney says the plans could change based on the fluctuating cost of building materials.

The Caulfield Volunteer Fire Department has been notified that it’s the recipient of a $500,000 grant to be used to build a new, bigger and more usable firehouse.

“We’re excited and hope the community will be too,” Caulfield fire chief Shannon Sisney said. “Thank you for all the support we continue to receive. We look forward to being better prepared to serve you.”

Sisney says the VFD’s current firehouse, which was built in 1975, is inadequate for the department’s needs today.

“It’s 50 foot long by 30 foot deep, and will only hold three trucks – and there’s an issue with the length, because most firetrucks are longer than the 30-foot length of the building,” Sisney said.

Because of the inadequate space, the fire department currently houses many of its trucks and vehicles at firefighters’ homes instead of at the firehouse.

In addition to space issues, the building has some structural damage too.

“The old station has several issues. It has a major water-leak issue in the roof. When it rains, the water pours into the bays under the doors . . . and the water comes in around the electrical on the roof and comes out of the electrical breaker box. In a hard rain, it’s nothing to walk into the station with several inches of water sitting in the bays.”

Sisney said he and the department members started looking into the possibility of applying for a Community Development Block Grant (CDBG) through the Missouri Department of Economic Development in 2018 to help combat the building’s issues.

The grant program, which is aimed at “supporting communities’ wellbeing and greater capacity for growth,” according to its website, was a good fit for what Caulfield VFD was hoping to achieve – and it was one of the few grant programs that provides funds for building infrastructure. The crew knew they wanted to pursue an application, but the application process was long, tedious and overwhelming.

The VFD reached out to SCOCOG (Southwest Council Ozark Council of Governments), an organization that helps public entities with grant programs, and the two groups partnered to put together an application for the 2019 grant program.

500+ hours of work on grant proposal

“We did the legwork that was required to apply for the grant, which meant we had to go to several houses in our district and complete something similar to a census. We turned all that in and then held public meetings to get the community’s input on the idea,” Sisney said. “The community obviously showed their support for the idea.”

Sisney said he estimates that he has put in about 300 hours of unpaid volunteer work to the grant application process, and his fellow volunteer firefighters have likely contributed about 250 or 300 hours on their own time.

“SCOCOG also has a considerable amount of time invested in this as well. It was a ton of paperwork,” he said.

After months of gathering the information and preparing the proposal, CVFD submitted its application. After a few months, it was notified that its application was not chosen, and its proposed project would not be funded for that year.

“We didn’t let that stop us,” Sisney said. “We updated our information and reapplied in 2020.”

The crew was unofficially notified May 25 that the latest application was successful.

“This means we’ll be tearing the old station down when the time comes,” Sisney said. “We have a local operator that has agreed to help us with it and haul off the material. We’ll be selling parts of the building when we get to that point . . . things like garage doors, roofing tin, joists and whatever else someone would want.”

GHN of Springfield will serve as the project architect. The company was chosen in 2019 when the VFD put its first grant proposal together.

“They were chosen out of the 15 companies that bid on the project,” Sisney said. “It was based on several factors, including their involvement in projects like this one.”

The new firehouse will be nearly double the size of the current structure if CVFD is able to build the new structure as the plans sit now.

“As of now, we’re planning a 90-foot-deep building that is 60 feet wide. The bays will be 60 feet by 60 feet and be able to hold all of our trucks, including our 5,000-gallon semi-tanker,” Sisney said. “There will be four bays facing the highway and one bay off to the side for smaller trucks, like our brush truck.”

Sisney says the design also includes a 30-foot-by-30-foot day-room area that will house a kitchen, bathrooms, offices and storage.

The plans are just what the VFD needs, Sisney says.

“This building will allow us to have all of our six trucks housed in one location instead of at people’s houses like they are now. Also, our semi-tanker has to be drained in the winter so it won’t freeze. If we need it for a fire, we have to take it to West Plains to fill it and then head to the scene,” Sisney said. “This will solve all of those issues.”

The timeline for the building is unclear at this point.

“There’s a ton of stuff that must be done per the federal guidelines before we’re able to start,” Sisney said. “We were told it’d be 60 to 120 days before that stuff would be done. Depending on that timeline, we may have to wait until next year [to start construction].”

Sisney says the first order of business will be removing the current firehouse, which also requires some planning.

“Once we tear the old station down, we would not have a place to store our trucks once winter gets here,” he said. “We’ll have to take bids on the contractors and then go from there.”

Sisney says he hopes to be able to hire mostly local contractors, if possible, to further help the community as part of the project.