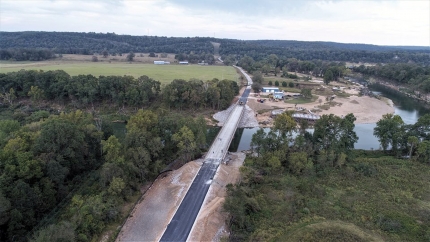 Photo courtesy Aerial Ozarks MoDOT officials say the recently rebuilt James Bridge on PP Highway near Dawt (shown here) will probably reopen to traffic next week, and the rebuilt CC Highway bridge near Hammond Camp may reopen as early as late today, Oct. 4, if final details can be completed. Both bridges were destroyed by the historic April 29-30 floods that lifted the North Fork of the White River to levels never seen before in recorded history. 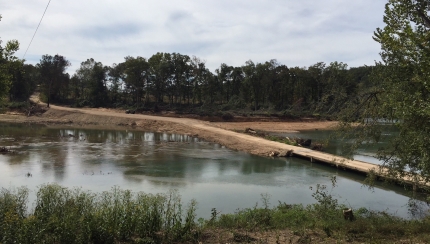 Photo courtesy Jerry Luna Warren Bridge on County Road Ozark County Road 328 has reopened to traffic, says Ozark County Eastern District Commissioner Gary Collins. He told the Times more work remains to be done, including pouring about 300 feet of concrete and bringing in rock to stabilize the newly repaired embankments along the roadway leading to the bridge. The bridge may be closed again sometime in the near future while the concrete and rock work is completed, but for now, traffic is flowing again over the Bryant Creek crossing that was destroyed by the April 29-30 floods.

By Sue Ann Jones, sueann@ozarkcountytimes.com
Many Ozark Countians are eagerly awaiting the reopening of two major bridges over the North Fork of the White River this week and next, hoping the Missouri Department of Transportation’s hopeful predictions stay on schedule. The bridges on CC Highway neaer Hammond Camp and James Bridge on PP Highway near Dawt were completely destroyed in the historic April 29-30 floods.

Meanwhile, other motorists on the east side of the county are happy that Warren Bridge on County Road 328 over Bryant Creek has now reopened.

Missouri Department of Transportation engineer Chris Rutledge told the TimesMonday that MoDOT officials would be meeting with Clarkson Construction Tuesday to review all safety requirements of the newly reconstructed brdiges on PP and CC highways. MoDOT resident Audie Pulliam confirmed Tuesday afternoon that the meeting had occurred and, if all goes as hoped, the CC Highway bridge may open as early as late this afternoon, Oct. 4.

Few will be happier about the impending reopening than students, faculty and staff members at Dora School, where dozens have been inconvenienced by the CC Highway bridge closure. Superin-tendent Steve Richards said Monday that detours around the destroyed river crossing have added another half-hour each way for those who live on the east side of the river and attend classes or work at the school.

James Bridge on Highway PP near Dawt will probably reopen late next week, Pulliam said. The bridge is basically finished, and only a few elements of the construciton remain to be completed. But extra days are needed to remove the old bridge, which lies downstream from the new structure, where it was deposited on the riverbanks by the powerful floodwaters.

Also closed since the April 29-30 floods, Warren Bridge on County Road 328 has now reopened to 24-hour traffic, says Ozark County Eastern Commissioner Gary Collins. He warns, however, that quite a bit of work remains to be done – including about 300 feet of concrete and rock to be added to the roadway and its embankment –  before the repair project is completely finished. The bridge will probably need to be closed again while that work is being done, he said, adding that no date for the additional work has been set.

The Missouri Department of Conservation access on the east side of Warren Bridge remains closed.

The county commissioners met with FEMA representatives last week, Collins said, “and they’re supposed to be back again to look at the rest of the places that need to be fixed.” The county anticipates that FEMA funds will be forthcoming to help repair the dozens of low-water crossings damaged in the flood, but so far, no specific amounts have been determined.