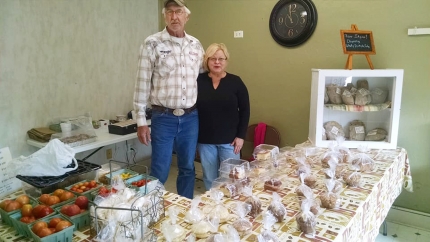 Cindy and Dewane Dillon, shown here in the Indian Grass Farms bake shop they opened recently in the old barber shop on the northwest corner of the Gainesville square, have put the business on temporary hold while Dewane recovers from a recent fall from a deer stand. He suffered several injuries and was flown by Air Evac to Mercy Hospital in Springfield but expects to come home later this week.

Last weekend many Ozark County youth hunters and their adult hunting companions took to the woods in an attempt to bag a deer during the early session of Missouri’s youth deer season. That’s exactly how the day began for 12-year-old Derek Winrod, son of Nathanael and Jennifer Winrod, and his neighbor and hunting companion Tecumseh resident Dewane Dillon. But the day took a turn for the worse when Dewane, while attempting to exit the deer stand, fell 15 feet to the ground. When Derek checked  on him, Dewane was lying unresponsive under the tree.

Derek ran as fast as he could back to the Dillon house, telling  Dewane’s wife, Cindy, what had happened. After Cindy called for help, the two headed back to Dewane.

“It was terrifying,” Cindy told the Times Monday by phone from Mercy Hospital in Springfield, where Dewane was taken by Air Evac. “It felt like I was floating on air I ran so fast. He wasn’t responsive at all at first. It took awhile, but after awhile he finally came around.”

Cindy said that Dewane had suffered bleeding and swelling on his brain. He underwent testing, and the couple had met with a brain surgeon who told them  that Dewane would not have to have brain surgery.

“We were so relieved to hear that,” she said. “It was so scary at first.”

“He’s never been sick a day in his life, and he’s such an independent person,” Cindy said. “It’s going to take some getting used to for the next few months.”

Dewane was still in the intensive care unit at Mercy on Monday, but Cindy said they were going to be moved to a regular room later that day, and she hoped she could bring him home by Wednesday or Thursday this week.

Despite his many injuries, Cindy said they are thankful the injuries didn’t leave Dewane paralyzed – or worse.

“God was there. That’s all I can say,” Cindy said. “He was pulling for him, and He’s heard all of our prayers.”

As newer residents to Ozark County, Cindy said they have been overwhelmed with the outpouring of support they’ve already received from friends, neighbors and community members in the area.

“It’s been amazing, the response we’ve seen from the community,” she said Monday. “There have been so many people who have called to check in and offered to help us. For instance, Lisa Goodnight offered to sit by Dewane’s bedside while I took my mom home to help take care of our house. It feels so good to be a part of a community of people who really care about you.”

Cindy and Dewane have met many Ozark Countians through their new bake shop, Indian Grass Farms, which originally began as a farmers market stand on the Gainesville square and recently moved into the old barber shop on the northwest corner of the square. Cindy said she is unsure what will happen with the bake shop in the next few weeks as she helps Dewane recover.