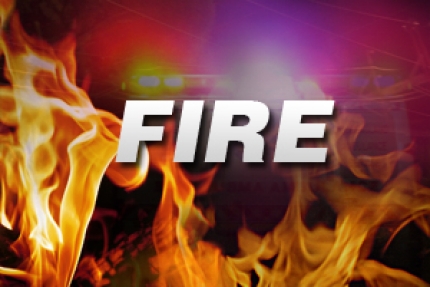 Mary Lou Hambelton, 78, was sound asleep in her Dora home a little after 1 a.m. Wednesday, Sept. 27, when she woke up and “had a funny feeling that something was going to happen,” she said Monday. A few seconds later, someone pounded on the door of her house south of Dora.

“It rattled me,” she said, laughing. “Jeepers, it scared me a little!”

She made her way to the door and saw, through the glass of her locked storm door, her late husband’s nephew, Greg Hambelton.

“Once I saw who it was, I recognized him and let him in,” said Mary Lou.

Greg had come by the nearby Luna Saw Mill and saw smoke coming out of the building and its rooftop glowing. He didn’t have a cell phone, so he hurried to his aunt’s house nearby to use her phone.

“I got the phone for him and got out the phone book. I read off the numbers to him, and he made the calls. We had a quite a time,” Mary Lou said.

They quickly called Sharon Fox, who has run the mill with other family  members since the death last year of her dad, Clifton Luna. They also called those other family members and the Ozark County Sheriff’s Department, which dispatched the Dora Volunteer Fire Department.

Sharon said she and her husband,  Kelvin, and the other relatives rushed to the scene. “We probably got there five minutes after Mary Lou called,” Sharon said. “It was so weird. There were no flames, but the tip of the roof was glowing.”

The mill is housed in a metal structure with open rafters supporting the roof. The building’s electrical wiring runs through the rafters, Sharon said. Since that was the only part of the building that had burned, it’s suspected that a fault in the electrical wiring caused the fire.

“The rafters were burning. They were like charcoal, and pieces were falling onto the mill floor and getting into the sawdust. We had fire extinguishers, and we grabbed them and used them on the stuff on the floor. Then the fire department got there and soaked the roof,” she said.

She learned later that Greg Hambelton, after he saw the red roofline, had tried to kick in the door to get to the office phone to call for help.

“We had just replaced the old wooden door with a metal one, and he couldn’t kick it in, so he ran up to Mary Lou’s and woke her up,” Sharon said. “It turned out to be not a big deal – but if it hadn’t been found when it was, it would have been a total loss, I’m sure.”

By Monday, Sharon’s husband had already replaced the damaged rafters, and they were waiting on an electrician who was scheduled to replace the wiring, she said. “So we’re not quite back to normal yet, but we expect to be soon.”

Going through some papers in the days after the fire, Sharon found a newspaper clipping from the June 22, 1986, Ozark County Times reporting a lightning-caused fire that had completely destroyed the family-owned saw mill, which had operated south of Dora since 1969 – and before that in other areas. The story was accompanied by a photo showing a flattened pile of rubble – all that was left of the business.

“Honestly, I think the pictures this time would be the same if the fire hadn’t been found when it was,” she said.