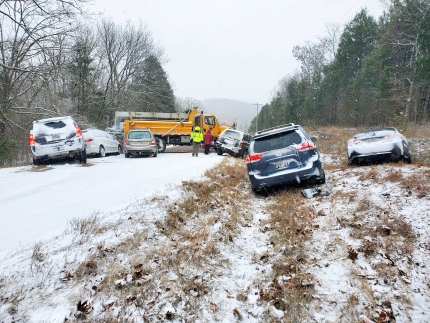 Emergency crews closed Highway 160 near Spring Creek Hill due to a seven-vehicle pile up, which included a Missouri Department of Transportation snow plow. The crash was first reported at 8:11 a.m. that morning when the MoDOT truck plow and two other vehicles collided. As other vehicles came upon the crash, they were unable to stop and slid into the ditches around the vehicles. There were no serious injuries reported from the crash. Another MoDOT plow truck crash was reported on Highway 181 at 12:17 p.m. that afternoon.

The first week of the new year blew in with some tricky winter weather.

On Wednesday, Jan. 5, local weather forecasts predicted a dusting of snow for Ozark County, but when residents awoke the next morning there was an inch or two on the ground.

The winter precipitation created quite an issue for area residents, and the Ozark County Sheriff’s dispatch office received a surge of calls that morning from motorists reporting crashes and vehicle slide-offs.

Many roads were closed for periods of time throughout the morning as emergency crews cleaned up the remnants of the crashed vehicles.

Christina Dallas, 36, of Tecumseh, reported the first crash of the morning at 7:41 a.m. She was the only crash victim who had reported injuries according to the MSHP crash reports.

Dallas was  traveling eastbound on Highway 160 in a 2012 Jeep Grand Cherokee when she traveled off the right side of the roadway and hit a ditch near J Highway, the report says. She was taken by ambulance to Baxter Regional Medical Center in Mountain Home, Arkansas, with a possible broken foot.

A flurry of calls followed Dallas’s crash report, and deputies, MSHP troopers, first responders and EMTs frantically worked to try to keep up.

At 8:11 a.m. a caller reported that a Missouri Department of Transportation (MoDOT) plow truck and two vehicles collided on Highway 160 near Spring Creek Hill. The crash grew to a total of seven vehicles before it was cleared.

Eleven minutes after the plow crash was reported, at 8:22 a.m., a vehicle slide off was reported on J Highway.

While emergency crews worked those crashes, a fourth call came in at 9:19 a.m. reporting a log truck that had run off the snow-covered Highway 101 and was stuck in a ditch. At 9:43 a.m., another vehicle slide-off was reported on the same highway.

At 11:05 a.m., the dispatch office received a report that a semi-truck was stuck between two slick hills on Highway 181 and unable to get off the roadway.

At 11:52 a.m., Gainesville VFD fire chief Ed Doiron called to say the firetruck had slid off Highway 160 into a ditch and was close to tipping over.

The sheriff’s report lists nine different crashes and vehicle slide-offs within a four-hour period that day.