Gainesville man chosen as one of five hunters for Missouri’s second elk season from more than 9,700 other applicants 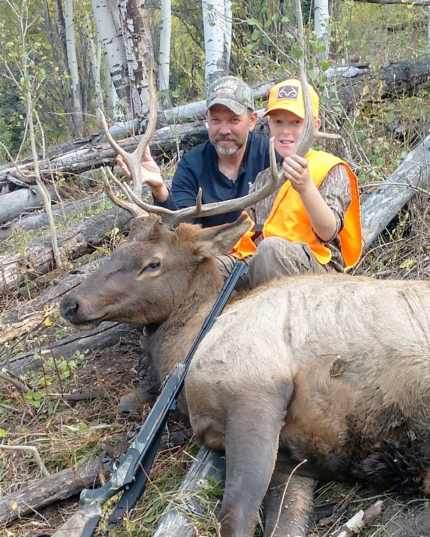 Gainesville resident Mike Ellison, pictured here with his son, Tyler, was chosen as one of five Missouri residents who are able to participate in this year’s Missouri elk hunting season. This photo was taken last year in Colorado when Tyler harvested this bull elk while hunting with his dad. Mike, an avid hunter and outdoorsman, says he hasn’t killed an elk before and is excited for the chance this fall during Missouri’s second ever organized elk-hunting season.

Ozark County resident Mike Ellison was drawn as one of five Missourians chosen for the state’s 2021 elk hunting season this fall and winter.

Look for an update in the Ozark County Times in late fall or early winter for Mike’s description of the hunt.

The Missouri Department of Conservation issued one permit each to the five hunters, which were randomly drawn from 9,714 permit applications. Of that group, one hunter was drawn from 84 resident-landowners who applied, and the other four, including Ellison, were drawn from the 9,630 other Missourians who applied for the lottery tag.

The four other applicants drawn for a permit to harvest one antlered elk in Missouri this season are Michael Duncan of Lesterville, who was drawn as the one resident-landowner hunter, Tyson Wall of Iberia, Robert Rothermich of Pomona and Chris Irick of Pleasant Hope.

Each of the five hunters will be able to purchase their elk-hunting permit for $50.

The tag allows the hunters to harvest one bull elk with at least one antler with a minimum length of 6 inches during either the elk archery season Oct. 16 to 24 or elk firearms methods from Dec. 11 to 19.

The permits may be used within Carter, Reynolds or Shannon counties where the majority of Missouri’s elk population is established. The hunt excludes the refuge portion of MDC’s Peck Ranch.

During last year’s inaugural elk season for Missouri, all five hunters that were drawn harvested an elk.

Elk hunting after years of restoration

Missouri’s second elk season comes after years of restoration efforts of the native species by MDC, numerous partners including the Rocky Mountain Elk Foundation, and many supporters including local communities and landowners.

In the United States, elk have historically had a large range from Southern California east to New York and south to South Carolina, an area that included Missouri.

Lewis and Clark reported elk in Missouri on their trip west in 1804, and explorer Henry Schoolcraft referenced elk when writing of his journey through the Missouri Ozarks in 1818–1819.

However, by the mid-1880s, market hunting had erased any trace of elk from the Missouri landscape.

In 2011, MDC reintroduced the first group of elk onto Peck Ranch Conservation Area in south-central Missouri. The elk were captured in Kentucky and transported here after undergoing disease testing and a quarantine period. Additional elk were brought into Missouri in 2012 and 2013. The 108 relocated elk formed the base for  the Missouri elk herd in parts of Carter, Shannon and Reynolds counties.

Learn more about elk restoration in Missouri at mdc.mo.gov/sites/default/files/2020-07/ElkInMissouri.pdf.