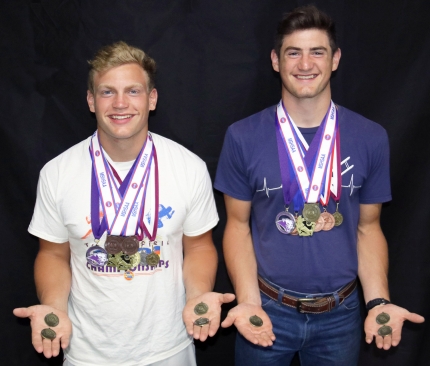 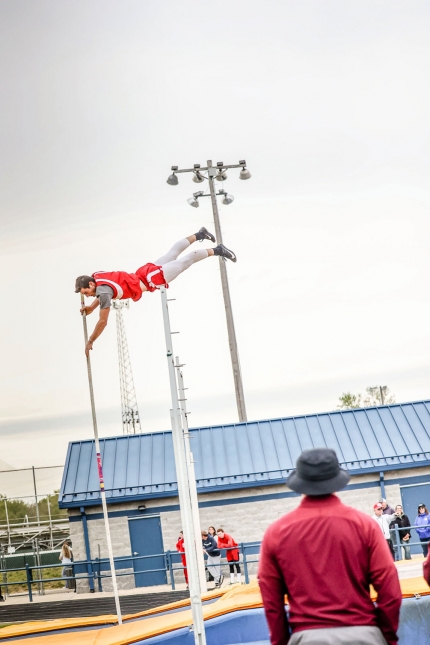 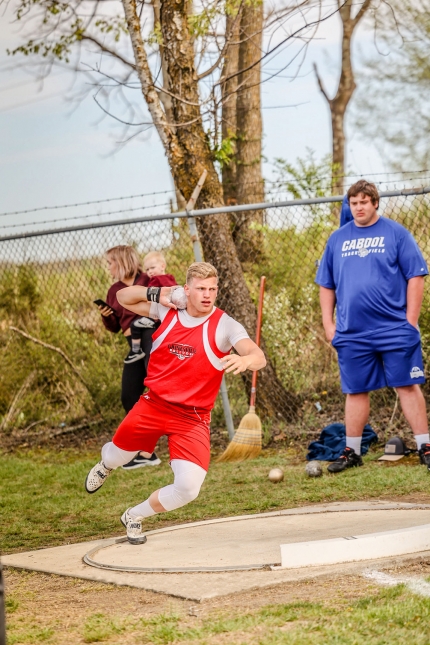 Photo by Karla Smith Double honors Josh Richer, 2021 Gainesville High School graduate, is shown competing in shot put at the Ava track meet early in the season. On May 21, he earned double all-state honors when he placed sixth in discus and eighth in shot put at the Class 2 state tournament.

Josh and Nate Richer come from a long line of hard workers who love track and field.  The boys, who moved to Gainesville with their family in November, lived out that legacy Saturday, May 21, at the Class 2 state track meet, where they won state honors and made their mark in Gainesville High School history.

Nate, a junior, was state champion in pole vault – a first state athletic championship for the school. Josh, a senior, placed sixth in discus and eighth in shot put. Being an all-state athlete in both throwing events is somewhat unusual.

The youngest two sons of Jerry and Caroline Richer, Josh and Nate grew up under the influence of an athletic family. Their grandfather, Daniel, was a pole vaulter at Liberty Center High School in Liberty Center, Ohio. Their father, Jerry, threw discus and shot put at Wauseon High School in Ohio. All their older siblings in the family of seven children competed successfully in several sports throughout their school years.

Nate’s trip to the pole-vaulting podium started with his grandfather.

“My dad was a pole vaulter, and my brother was a vaulter and really enjoyed it,” said Caroline. “My brother Kirk walked on to the Ohio State track team to vault. So, through the years, my dad has been looking over all his grandsons, wondering which one is going to be the vaulter. He’s been working on it and has done pretty well. There were four of us kids, and we all had kids. A couple of cousins are vaulting now; another one of them went to college vaulting. There’s an indoor gym about two and a half hours from where we lived, and he’d take the boys down there to learn to vault.”

Nate went to watch his older brother Joe practice. Joe was a good vaulter too but had started a little too late in his career. And that’s where Nate tried vaulting for the first time as a very young boy. “The pole slipped out from under me, and I went right down on my butt and cried,” Nate said, laughing. He kept trying, though, and found he loved flying through the air.

As a matter of fact, Nate loves being in the air so much, he has plans to become a commercial pilot. “I really love air time,” he said.

Nate set his personal record of 14 feet at the Class 2 District 6 meet on May 8 at Reeds Spring and also took first place in the 300m hurdles there. He set a goal of improving his vaulting PR to 16 feet and is working toward a return trip to the state meet next year when he’s a senior.

Gainesville High School doesn’t have facilities for pole vaulting, so Nate, along with his mom or his brother Joe, who helped coach this year’s team, drove to Ava High School almost every day for practice. Emrick’s background is in running, and he was appreciative of the Richer parents’ help with coaching some of the events.

“Jerry was a thrower back in the day, taking third at state in the discus his high school senior year, and he coached the throwers,” said Caroline.

“If you only have one coach for the entire track team, you’re spread so thin, you just can’t give every individual event the time it requires, so we were happy to help,” said Jerry.

It takes a lot of hard work to be successful at track, even with natural ability, the brothers said. “You definitely have to put in the work for both these events,” Josh said. “In my opinion, throwing and pole vault are the two hardest. You have to be strong; you have to be fast; and you have to have good technique. There are a lot of hours of drilling I’ve done over the years – drills done over and over and over.”

They practice all year long, not just during track season.

“It is extremely technical,” his mother agreed. “Every little inch in that ring is thought out, and you need to be in a certain balance and certain place. You’re training your muscles for that, so that when you do enter the ring in competition, you don’t even have to think about it. Your body just knows what to do.”

Josh, who graduated this year, took first place in discus and shot put at the Class 2 District 6 meet in Reeds Spring and went on to take first in both events at sectionals before heading to the Class 2 state meet. He’s working with his father this summer in the family construction business and plans on taking a gap year to decide whether to continue in the family business or attend college and work toward a career in sports medicine or sports training.

“I’d like to coach and help kids out,” he said. “And maybe start my own gym.”

The Richers moved from Wauseon, Ohio, in November and now live on a farm on Highway 181 in Gainesville. “We vacationed in Missouri a few different times over the years and also have done mission work at several different church camps,” said Jerry. “We really loved the mountains here, and there’s a lot nicer weather here.”

“Getting away from the snow has been good,” Caroline said. “Our son Joe came out to Lamar for Heartland Horseshoeing School, and it just seemed like the Lord kept bringing us to Missouri for a lot of different stuff. We’ve always loved the mountains, like Jerry said. So, when we decided it’s time to move – we had always talked about moving – we thought the Ozark Mountains were a perfect fit. We love Missouri. We looked at properties all over because the Ozarks is such a big area, and we fell in love with this area. We loved the fact that there weren’t so many houses everywhere. We liked the smaller school system. The people down here are so very, very nice and welcoming.”

Even though Josh was in the middle of his senior year, he has no regrets about moving to Gainesville. “It made it easier for me because I finished my football season. We moved the day after we lost our last playoff game,” he said. “And it really doesn’t matter where you go to school for track.”

“He had played seven years with those guys,” his mother said. “He didn’t want to give up his last year. They had an excellent, excellent team. So we waited until the season was over before we moved.”

The Richers hope more Gainesville students will participate in track. “Maybe the boys’ success will help generate some more interest in the track program,” Caroline said. “Track is great. There are so many different events, you can try all kinds of things. It really is a very technical sport. While it’s not just something that anyone can do, if you’re willing to put the work in and have an inkling of talent, you can do something with it.”