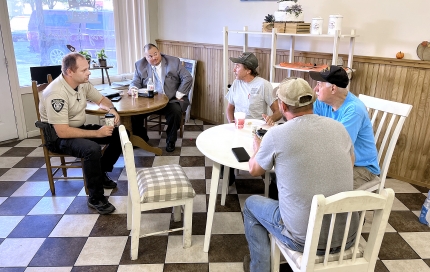 Ozark County Sheriff Cass Martin, left, and former Prosecuting Attorney Matt Weatherman, center, are shown speaking with area residents last September during one of the sheriff department’s many town hall meetings held across the county to discuss the additional half-cent law enforcement sales tax that the department was proposing. The measure passed by a large margin in the November General Election, but officials here were notified in early January that a state statute is keeping the county from being able to collect the tax. Officials are now working together to find the next steps needed to put the measure back on the ballot.

Ozark County leaders were shocked recently to learn that a half-cent sales tax approved by voters in the November general election could not be collected by the Missouri Department of Revenue.

The news about the sales tax technicality broke last week as the Ozark County Times was going to press. Since then, the Times has learned that the measure, which passed overwhelmingly by voters in November (65.45% to 34.55%) is dead in the water and will have to be voted on again.

“There’s no way to resurrect it. This measure will have to be voted on by the people again,” said 155th District State Representative Travis Smith, who has been working with the Missouri Department of Revenue on the issue.

“So basically what happened is that there is a statute that was passed in the legislature in 2017 that puts a cap on the amount of local sales tax that can be collected by counties,” Smith said. “The way the ballot language was written for this tax, it violated that statute. It’s bizarre, because the county thought the ballot language was correct, but there was this statute that had been passed that basically threw a wrench in it—a technicality that only lawyers would notice.”

County Clerk Brian Wise said he didn’t want to point fingers about the mistake and that he and county commissioners are working with Smith and others to rectify the issue. “I mean, it’s a complicated thing. I read law every day. What we want to do is work together to get the issue corrected,” Wise said.

Smith said he wants people to know that the sales tax measure will not be collected. “People won’t be paying that tax. It’s dead. What we need to do is correct the ballot language and get this back before the voters for the April election.”

Smith said he is working with the Department of Revenue on correct ballot language. “One thing I’ve learned as a state legislator is to not be afraid to ask for help,” Smith said. “The Department of Revenue is being very helpful in working with us to get the correct ballot language, and I fully expect to have this ready for the commissioners to move forward with this for the April election.”

New Presiding County Commissioner Terry Newton said that in order for the tax measure to be on the April ballot, the commission must vote on the matter by Jan. 24. The county commission has to approve local sales tax measures before they can be placed on the ballot.

“The people that I’ve talked to have been pretty understanding about it,” Newton said. “They understand if a mistake was made, they just want to see it get corrected.”

Smith said that’s the best way to handle it. “We’re all human, mistakes are made all the time,” Smith said. “My thing is, when mistakes are made, we just say we made a mistake and let’s work our tail off to fix it.”

Wise said he still doesn’t understand how the state legislature can make rules that supersede local support. “I have problems understanding how the legislators can tie the hands of the voters,” Wise said. “It just doesn’t make sense to me.”

State of the sheriff’s department

With the tax dead in the water, Ozark County Sheriff Cass Martin said he’s not sure how to proceed with the budget and the year ahead.

“It’s a punch in the gut,” the sheriff said. “We worked so hard on this in educating people. We had several town hall meetings and talked to so many people about the needs within the sheriff’s department. I’m flabbergasted.”

The sheriff said the plans to bring his staff back up to par have been thrown out the window. “It looks like we’re back in survival mode,” Martin said.

“We’re just now starting the budget process, so we will know more in a couple weeks, but I don’t expect to be fully staffed anytime soon.”

Due to a budget crisis in 2022, the sheriff had to cut seven employees from payroll and change policy to allow for deputies to only respond to serious calls.

Ozark County law enforcement is currently funded mostly by a half-cent sales tax that has been in place for many years. That tax brings in around $400,000 per year while the law enforcement budget is usually around the million dollar mark. Officials estimate that an additional half-cent sales tax would bolster the sheriff’s department and make it self-sufficient, allowing for a full staff and adequate jailers and dispatchers to cover the county.

The sheriff said he’s not looking forward to the sales tax issue going back before voters.

“It’s disheartening,” the sheriff said. “To think we have to basically start over on this... We thought we were good to go. The people came out and supported us on this, and I’m just hoping they understand and will do it again.”

Even if the issue makes it on the April ballot, and if voters approve the sales tax again, it would likely be late summer or fall before the county sees any revenue from it, officials said.

“In the meantime we’re just going to have to grit our teeth and try and keep our heads above water,” the sheriff said.

The Ozark County Times will have continuing coverage on the county budget, as officials expect to have their budgets completed later this month.