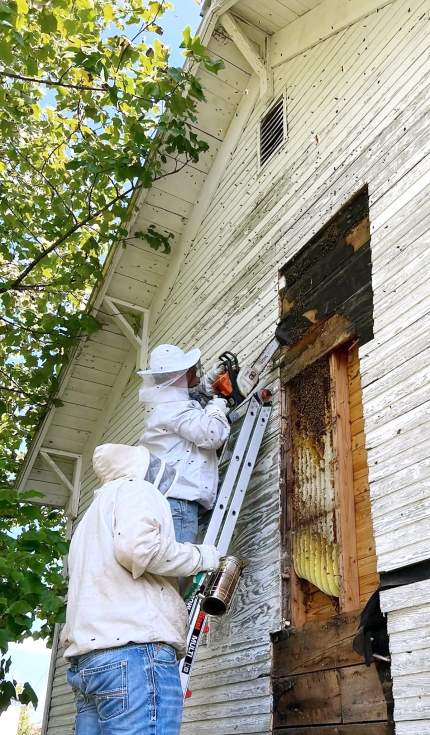 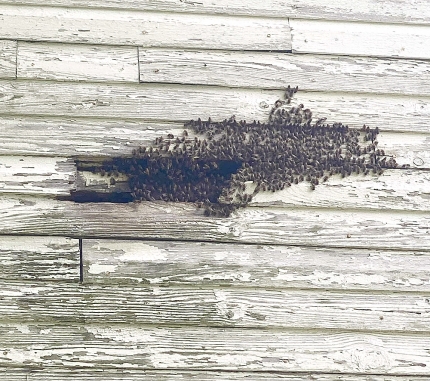 The Caulfield Community Building was all abuzz with activity recently.

On Friday it was the site of a special 100th birthday party for local matriarch Blanche Tackitt Langston Harden (see related story, page 16), but the real buzz was on Saturday when local beekeeper Lucas Hensley and his wife Jamie were called on (with the help of friend Jerry Pearson) to remove a massive colony of bees that had made the north wall of the old structure their home.

Hensley told the Times that he was called on by members of the Caulfield Community Association to remove the bees from behind the lapboard siding of the structure because the group had received a grant to update the facade of the building, but before work could begin, the bees had to go.

Hensley and Pearson began cutting into the wood siding of the structure with a chainsaw, revealing an enormous honeycomb that was more that 8 feet in length.

“It was pretty big,” Hensley said. “If you know anything about bees then you know they don’t care for power saws, so they got a little rowdy when we were cutting into the wall.”

Hensley said that, despite wearing a jacket, gloves and hood with a protective mask, he still got stung. “I’d say I probably got stung about 25 times,” Hensley said. “Once we were able find the queen and get her in the new hive box they all settled down a little and followed her.”

Hensley said he estimated between 50,000-60,000 bees were making the back wall of the old building their home.

“They’ve been safely re-homed to a new hive and are doing good,” he reported.

The old Caulfield Community Building, which has been the hub of community gatherings in the Caulfield area for more than half a century, had fallen into a state of disrepair over the years.

Community efforts in recent years helped save the old building and allowed organizers to pay the bills and make some much needed repairs.

Now with a grant to update the facade of the building, the community center can house pie auctions, musicals, birthday parties and other community events for years to come. And because it’s grant money that doesn’t have to be repaid, that helps take the, uh, “sting” out of the local budget.