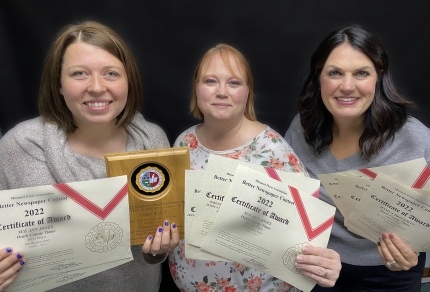 Times photo/Norene Prososki The Ozark County Times was honored with 10 awards in the Missouri Press Better Newspaper Contest based on work written, designed, created and printed in 2021. Staffers pictured in the above photo from left are, Editor Jessi Dreckman, Office Manager and Graphic Designer Regina Mozingo and Publisher and Ad Manager Jenny Yarger. Former Editor Sue Ann Jones, no pictured, continues as a feature writer and gathers information for the Times Past column each week. Other staffers include Reporter Bruce Roberts, not pictured, who joined the staff in December 2021, and Times owner Norene Prososki, who is semi-retired and works part time.

Participating newspapers were notified of the winners in June; however MPA asked that the awards not be publicly announced until its Better Newspaper Contest Awards luncheon, which was held Sept. 17 in Lake of the Ozarks.

The Times competed against newspapers of similar size across the state.

• Best special section: The Times took home first place, along with the second and third places (see further on), in the category of best news or feature special section.  The staff took first place for its work on the 2021 The Real Ozarks visitors’ guide. The Real Ozarks is published annually in the spring and distributed to all Missouri and some Arkansas visitor’s centers, as well as businesses around the county.

• Best business story: Sue Ann Jones won first place in the “best business story” category for her article titled, “Chaney Monument: one of Ozark County’s oldest businesses, continues as a gift to the community,” published June 2, 2021. The article described the history of Gainesville’s Chaney Monument, started by Leonard and Hattie Chaney in 1935, and the Collins family, who has owned it since purchasing the business from the Chaney family. The judges had this to say about the article: “Excellent story about the family business, and such a terrific job of digging into the business history. Well done!”

• Best overall design: The Times staff won second place in the “best overall design” category. The category is judged by three separate issues submitted to the contest, which are evaluated as one body of work for consistent quality of layout and design including typography, photography, graphics, wihite space and all other design elements. In response to the Times entries, the judges said, “Well organized. Good use of photos. Consistent, attractive design.”

• Best military story: Sue Ann Jones won second place in the category of “best military story” for her article, “Sometimes the heroes’ graves we honor on Memorial Day are empty,” published May 19, 2021. The judges had this to say about the article: “A narrative tribute to families whose members served in the military, and in this story, never returned home. Headstones memorialize their service; their remains remain in distant lands. Good writing/reporting.”

• Best special section: The 2021 Hootin an Hollarin festival guide, published each year in September, the week before the annual festival in Gainesville, took home the third place title in the “best news or feature special section” category.

• Best story about the outdoors: Jessi Dreckman won third place in the category of “best story about the outdoors” with her article titled, “Gainesville man kills Missouri elk with bow in state’s second elk season,” published Nov. 3, 2021, about Mike Ellison’s hunt in Oregon County this year. The judges had this to say about the article: “One of the greatest wildlife restoration efforts in world history, as elk are returned across the species’ former range. The return of hunting is a sign. Missouri’s elk restoration project is well on its way.”

• Best story about history: Sue Ann Jones took home the first place award in the category of “best story about history” with her article titled, “Remember Dr. Hoerman: Siblings’ gift to Historium is scrapbook of Gainesville’s appreciation for former doctor,” published Aug. 25, 2021, about a scrapbook that the late Geraldine Lovan made focused on the work of Dr. M. J. Hoerman, who operated a medical practicåååœe here for 25 years. The judges had this to say about the article: “Great feature on a person who made a tremendous health and social impact on hundreds of lives.”

• Best feature story: Jessi Dreckman won honorable mention in the category of “best feature story” for her article titled, “High school ring, found 1,000 miles away, returned to Gainesville woman,” published June 2, 2021. The judges had this to say about the article: “The writer kept me engaged from beginning to resolution. While the reader knows who the ring belongs to, it was still exciting being ‘in’ on the mystery. Will she get her ring back? Who knows! Read on!…”