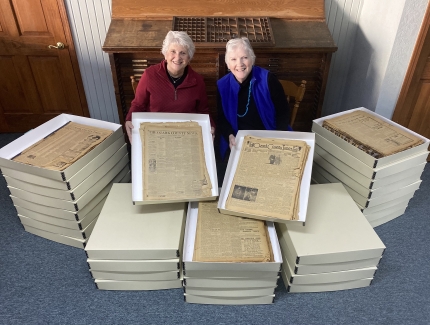 Historium volunteer Janet Taber, left, and retired Ozark County Times editor Sue Ann Jones show the recently acquired archival-quality boxes that will store hard, unbound copies of the Ozark County Times, some of them more than a century old. A Brownlee Local History Grant from the State Historical Society of Missouri provided $500 for the purchase. 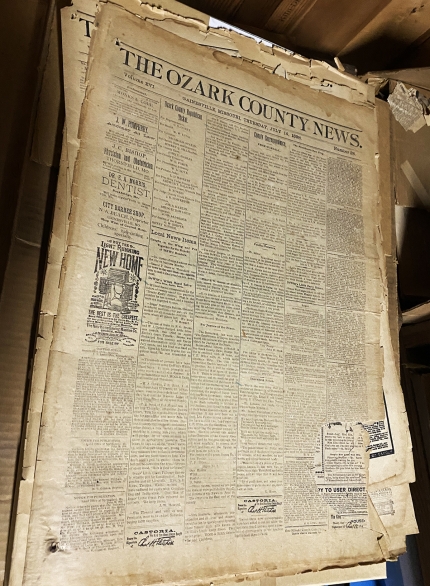 This copy of The Ozark County News, dated 1898, is one of the oldest hard copy editions the Times currently has stored. 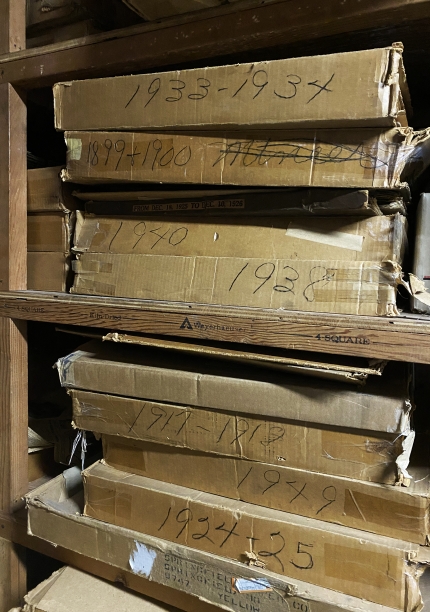 Currently the old editions of the Ozark County Times are being housed in cardboard boxes in the newspaper’s store room. The boxes have weathered many years. The newer boxes will provide increased protection for the aging papers, some of which are more than 125 years old.

Physical copies of the Ozark County Times from the late 1890s and early 1900s are now being stored in archival-quality boxes that will help preserve the fragile newspapers, thanks to recent funding made available through a State Historical Society of Missouri Richard S. Brownlee Missouri Local History Grant.

The Ozark County Genealogical and Historical Society, based in the Ozark County Historium, works with the Ozark County Times staff to maintain the newspaper's digital archives on the Historium's public-access computers. But the organization, which has ties to the late Ruby Robins, longtime owner and publisher of the Times, is also interested in maintaining the last remaining physical copies of the newspaper as well, said OCGHS president Sue Ann Jones.

Jones, who retired last year as editor of the Times but continues as a feature writer, worked for Robbins part-time and remotely in the 1960s, '70s and early '80s. She and Historium volunteer coordinator Janet Taber, whose great-grandfather Earle Ebrite owned the Times from 1906 to 1947, serve on the board of the Ruby Robins Trust for the Preservation of Local History. The trust manages a small fund that was designated for that purpose in Ruby Robins' estate. Among other things, the trust has paid to digitize all available microfilmed copies of the Times maintained by the State Historical Society of Missouri. Those digital PDF files comprise the archives available on the Historium's computers.

Jones and Taber applied for SHSM Brownlee grant in memory of Robins, who, though she wasn't a Missouri native, loved the history of her adopted home. She and her husband, the late Fred Robins, bought the Times in 1959 after 12 years of living in Columbia.

There, Fred was director of student and university publications for the University of Missouri, and Ruby researched and wrote the 118 state highway history markers for the State Historical Society of Missouri (including the one that stands on the Ozark County Courthouse lawn).

With her love of history, Ruby established the tradition of binding each year's 52 weekly editions of the Times into clearly labeled books. But the hard copies of the Times from the 60-plus years before the Robins ownership continued to be stored in makeshift cardboard boxes.

Amazingly, when a fire destroyed the old Times office building in February 1963, those tattered boxes of old newspapers were among the items saved. When the new building was constructed, Ruby designed a closet – called the "morgue" in newspaper tradition – with shelves specifically sized to hold the large, bound editions, as well as the old cardboard boxes.

After Fred Robins' unexpected death in June 1967, Ruby continued to own and operate the Times until she retired and sold the newspaper in May 1985. But her days in publishing weren't done. She and a committee of OCGHS members soon began the mammoth task of writing and compiling the 634-page book, "A History of Ozark County 1841-1991," published by OCGHS in 1991.

Taber, who knew and admired Ruby, said last week she felt sure the former Times owner would be delighted to know steps are being taken to preserve the oldest editions of the newspaper. Current owner Norene Prososki agrees. "These papers represent our history as a community newspaper, and they're a powerful reminder of all the people who kept the Times going during the last 120-plus years," Prososki said. "They inspire us to carry on that tradition."

Until the new storage boxes arrived, the old newspapers, now so fragile that they sometimes crumble when a page is turned, have continued to reside in those crushed and broken cardboard boxes that have been slowly disintegrating as the decades passed. The new, archival boxes are made of specially treated materials to slow future deterioration and have metal-reenforced corners so that they don't collapse when stacked. Each box can accommodate two years of newspapers, and the boxes will be labeled accordingly by Times staffers as the precious old papers are moved.

"We're grateful to the Historical Society of Missouri for helping us preserve this important piece of Ozark County history," Jones said.