Taney County opts out of scenic byway; Howell and Ozark counties likely will too 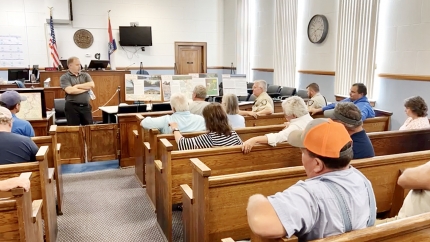 Times photo/Bruce Roberts Local residents gathered for a public hearing recently regarding the proposed Ozark Run Scenic Byway. Several counties have opted out of the proposal.

The proposed Ozark Run Scenic Byway is beginning to look like a fragmented map of dots and lines that rarely connect instead of the seamless 375-mile route from St. Louis to Branson that planners had envisioned.

That’s because counties and cities are opting out, due mainly to public feedback from residents who fear government overreach.

The Ozark County Times reported last week that Taney County had approved the scenic byway proposal. That reporting was based on a statement made by Eric Hermanson, the man who came up with the proposed byway idea, during a public meeting in Gainesville.

Shannon and Oregon counties have also opted out of the proposal.

Both Ozark and Howell counties have not officially voted on the issue, however commissioners from both counties say they will probably opt out as well, which would nix the entire Highway 160 stretch of the byway.

Ozark County Commissioners Gary Collins and Layne Nance said they both plan to vote no on the proposal, but that the commission is offering a 45-60 day period for public comment.

“I’m voting no, and nobody is going to change my mind,” said Western District Commissioner Layne Nance.

A Gainesville area resident spoke Monday during the citizen’s comment section of the county commissioners’ meeting and asked commissioners to consider the potential benefits of the byway.

William Schoelles told commissioners that he had read over the byway proposal and doesn’t see anywhere in the plan where it would infringe on property rights.

“I ride a motorcycle, and one of the things I like to do is ride on scenic byways because I know I’ll be seeing some great places and spending my money supporting small businesses instead of big corporations,” Schoelles said.

He said he sees the byway as a potential revenue boom for Ozark County.

“It looks like, according to census data, that the county has seen a population decline in recent years, so eventually we may be unable to rely on sales tax to fund county services,”  Schoelles said. “The byway could increase sales tax revenue, and it looks like the county budget really needs it.”

The scenic byway proposal is the brainchild of Hermanson, a St. Louis computer software developer. Hermanson described himself as a “Missourian who loves to travel the backwoods of rural Missouri and the Ozarks.” Hermanson is also a board member on the non-profit group Scenic Missouri, which falls under the umbrella of Scenic America, a national organization.

Scenic Missouri describes itself as an “organization dedicated to the enhancement and preservation of Missouri’s scenic landscapes and communities,” according to their website scenic.org. The website also states that “Scenic Missouri provides educational and technical services to communities across the state on aesthetic issues including billboard and sign control, landscaping standards, tree presentation and the regulation of communication towers.”

Local approval is required for the scenic byway to come through a county or municipality. In Ozark County, that means Ozark County commissioners have to agree to the proposal, and a written statement of support must be given to the Scenic Missouri group within 90 days of the public hearing.