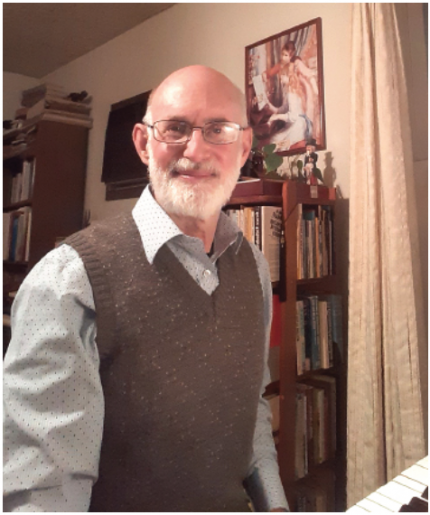 Mr. Cartwright Ray Cartwright teaches art and music to kindergarten through eighth grade classes at Thornfield. He has taught at Thornfield for 13 years. This photo was taken recently at his Sparta home as he was preparing to practice “Pomp and Circumstance” on the piano in preparation for the combined kindergarten and eighth grade graduation ceremony at the school. Hanging on the wall is a reproduction of one of his favorite pieces of artwork, the Pierre-Auguste Renoir (1841-1919) work “Two Young Girls at the Piano.” Cartwright says he has often discussed the piece, which was painted in 1892, with his students, especially as they study impressionism art.

By Jessi Dreckman, jessi@ozarkcountytimes.com
‘The rewards and joys come from witnessing results of creativity and hard work on the part of the students, along with the joy and pleasure that their hard work and creativity can bring to others – including me!’ - Ray Cartwright

Nestled among farmland and quiet, rolling hills, Ozark County’s smallest school district has a unique charm all its own. Thornfield School, the only kindergarten through eighth grade district left in the county, has just over 40 students and a small group of teachers who care deeply for the children who attend.

Among those educators is Ray Cartwright, a “semi-retired” educator who brings a bright light of passion for art and music to all his students, says superintendent Melissa Campbell.

Mr. Cartwright makes the 46-mile trip to Thornfield School from his Sparta home twice a week, on Tuesdays to teach art and on Thursdays to teach music to the school’s nine different grades.

Cartwright began teaching at Thornfield 13 years ago in the fall of 2007. He’d taught school previously at two private Christian schools, and had also served as the K-12 music teacher for Chadwick Public Schools for some time.

Originally from Nebraska, he earned a Bachelor of Arts degree in music from Doane College in Crete, Nebraska, in 1973. Over the years, he’s studied the craft further at three Springfield universities: Missouri State, Drury and Evangel.

Cartwright says he’s impressed by his students’ dedication to their work in his classes.

“The students at Thornfield work very hard to prepare for two music programs each year… One is Grandparents’ Day, and the other is Christmas,” Cartwright told the Times. “Their hard work, along with the cooperation and help of the teachers, staff and administration is what makes our programs successful.”

“They are always quite proud of the result of their hard work,” he said.

During the Grandparents’ Day celebration, the students’ artwork from their year is displayed in the school’s hallway for guests to view before and after the music program.

“The children delight in giving their grandparents a personal tour of our galleries,” he said. “I myself never tire of looking at displayed student art work.”

In addition to the hallway galleries, students also construct table toppers for the event in art class.

“Since our Grandparents’ Day happens near Thanksgiving Day, the students also use their artistic talent to make paper roll and construction paper turkeys which they paint,” Mr. Cartwright said.

The turkeys, displayed on the tables where the staff, students and grandparents eat their dinner following the program, are often a hot topic of discussion, as students proudly explain their creative process in making the centerpieces.

Another highlight among the art class projects is a Christmas drawing contest.

“The children compete to draw the best personal Christmas scene, and if they win, it’s featured on the cover of the Christmas programs that are passed out to those who attend the program,” Cartwright said. “I, with the help of other staff, usually narrow it down to one picture, but often we end up including two or three student works because it is so hard to choose from the delightful drawings.”

Cartwright says the gym is also decorated with students’ artwork during the Christmas program at the school.

“The children at Thornfield love art because it gives them such a personal way to express themselves. My main contributions to the art program are keeping students on task and trying to see that their art work is displayed,” he said.

Cartwright says he’s witnessed firsthand just how special Thornfield School District is to those who grace its halls, whether they’re staff or students.

“The rewards and joys come from witnessing results of creativity and hard work on the part of the students, along with the joy and pleasure that their hard work and creativity can bring to others – including me!” he said. “And there is also joy in working with administration, teachers and staff who love people, especially children.”