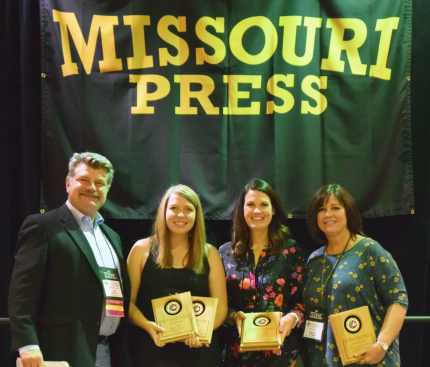 “I’m extremely proud of the staff at theTimes,” said Times publisher Norene Prososki. “Jessi Dreckman’s design talents and top-notch reporting, along with Sue Ann Jones’s experience as writer and editor are real blessings to a small weekly paper like ours, and I’m thankful to have them.”

The Times took first place for the best front page, which is judged on design, photography and quality of writing.

The Times staff won second place in the best overall page design category, which is judged on consistent quality of design and layout of the entire newspaper, including typography, photography, use of white space and all design elements.

Sue Ann Jones took second place in the best humorous columnist category with her column “Grandma’s lesson of the underpants.” “Wonderful reminiscing in a neighborly way,” a judge said in the written comments accompanying the award. “It reminds us that doing the right thing matters even if no one else will know. Quality stuff.”

Dreckman brought home second place in the best photo illustration for her “Some sacrificed all” design in theTimes’ Memorial Day issue.

The Times received third place in the community service category for its coverage and sponsoring of a project for free smoke alarms following a tragic fire that killed a young Gainesville student, Jesse Sims, and his family.

Jones won third place in the best news or feature obituary category for her story on Clifton Luna’s  funeral in Dora.