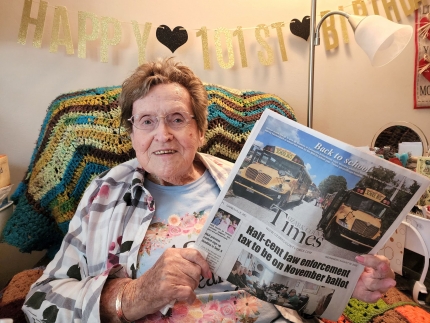 Juanita Loraine “Waukee” Poe, now 101, says she looks forward to “paper day” each week so she can sit down and read the Times. Waukee, who lived in Udall for most of her life, now lives in at a skilled nursing facility in Springfield. She says she’s been overwhelmed and is so thankful for all the birthday cards and comments she’s received and visits she had with those that were able to be with her on her birthday. 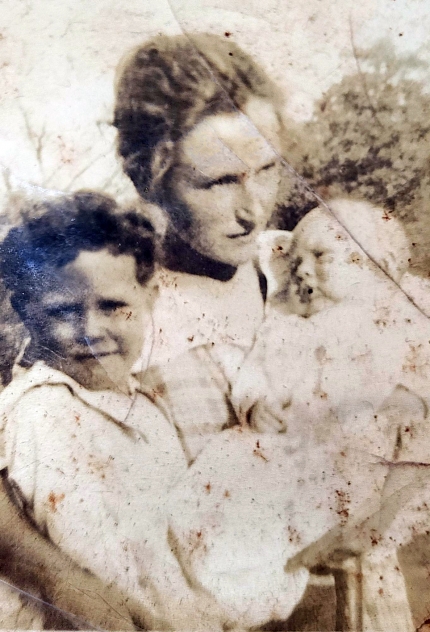 Baby “Waukee” Poe is pictured here in 1921 with mother Etta Kirkland and sister Christine. Waukee weighed more than 13 pounds when she was born. 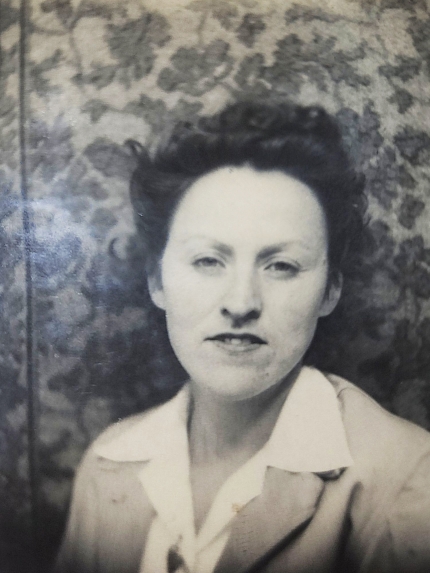 She was about 15 when this photo was taken, about the time she left to live in Kansas City as a nanny. 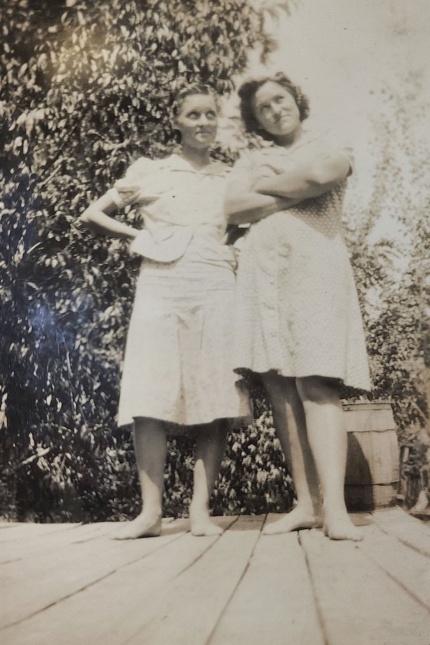 Waukee pictured at right, with friend Fern (Carter) Winfrey were known for their sometimes silly personalities. 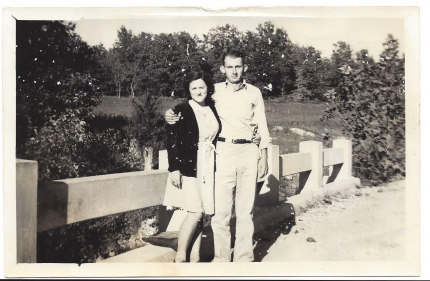 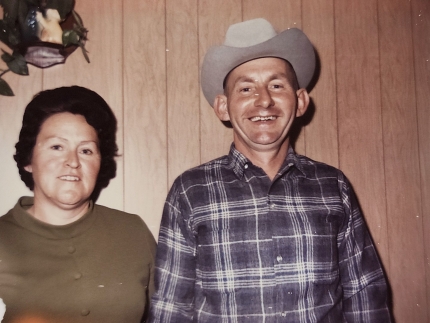 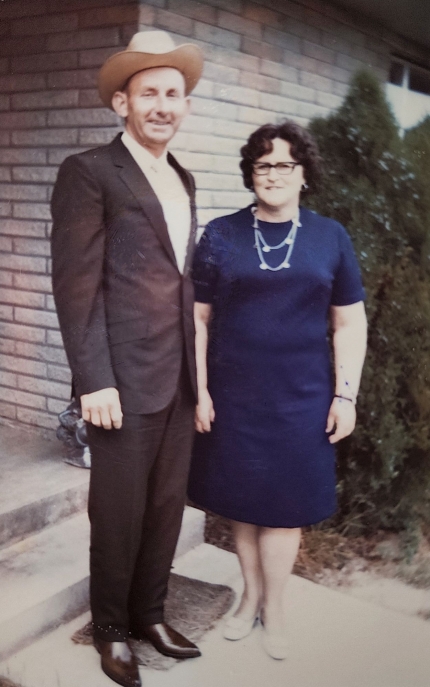 This photo was taken at Waukee's 82nd birthday party, when a large group of friends and family gathered to celebrate the family's matriarch. 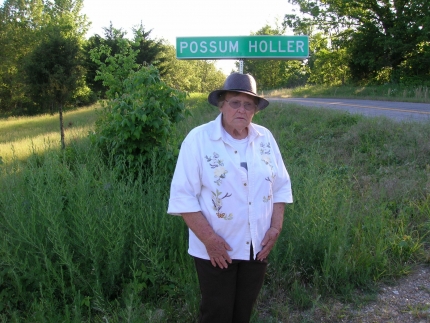 Waukee is pictured here next to the Possum Holler road sign. 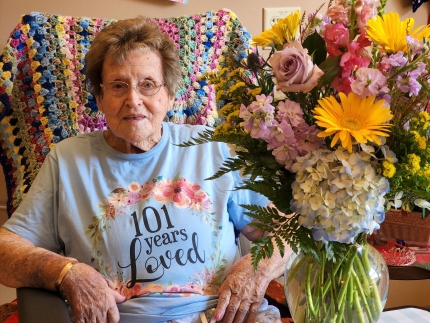 As happy as ever, Waukee spots her "101 years loved" t-shirt with a beautiful floral arrangement on her birthday, Aug. 25.

The average life expectancy for an American is 78 years-old for men and 82 years-old for women. Less than one percent of us will live to be 100.

So Aug. 25 was a special day for Waukee Poe, a lifelong Ozark County native who’s spent most of her life in-and-around Udall and now lives in Springfield.

Born Aug. 25, 1921, Juanita Loraine Kirkland was given the nickname ‘Waukee’ (a Native American term for ‘strong’), and it stuck.

“I am ornery,” Waukee admitted. “And I had a relative who said I was too mean to die and that I’d live to be over 100 years old. And I did. I was born on a porch, and a girl and boy was sitting there sparkin’ while my momma was trying to have a baby.”

How does she feel now, as she celebrates 101 trips around the sun?

“If I could walk and get around and hear, I wouldn’t feel like I was past 80 years old,” she replied with a smile.

From quilting to cooking to farming, Waukee learned many of her skills growing up during a time when there were no modern conveniences as electricity and cars hadn’t made their way to Udall yet.

It wasn’t until she went to Kansas City at the age of 15 to work as a nanny that she got her first exposure to things like indoor plumbing and electricity. Waukee remembers vividly when she saw her first streetcar.

“We were on a bus, and as we came to those light switches I thought it was comin’ a lightening storm,” she recalled. “I got used to having electricity when I was in Kansas City, so it sure was hard to come back to washing in a wash pan. When you took a bath you had to go to the creek and bathe before you went to bed at night.”

When Waukee returned to the Ozarks she also drove a truck that hauled men to a worksite that was to become the Norfork Dam.

“It was a dam truck,” she said with a laugh. “It just had these seats in the back made out of boards that these poor old men sat on as I’d take a load up there and bring a load of them back. I had a chauffeur’s license, and I think some of them were jealous.”

Waukee married Willie Poe in 1944, and they started a cattle farm, and some of the land was flooded when the new dam was built. Waukee became active in many community events and clubs but still put in a hard day’s work on the farm even after her husband passed away in 1986.

She worked well into her 90s single-handedly keeping the farm running, and her grandson Brent Slane tells the story about how local cattlemen were amazed at her skill of leading a herd of cattle anywhere she wanted by simply carrying a five-gallon bucket of feed around.

“No horses, four-wheelers, dogs or hoopin’ and hollerin’ was as effective in herding cattle as Waukee was able to do with simple kindness,” Brent wrote.

When asked if it was a tough job?

“Yes it was hard,” she replied. “Have you ever castrated a calf? It’s sure not a pretty sight.”

After her daughter Kathryn passed away from covid-19 just days after Waukee’s 100th birthday, Waukee moved to Springfield Villa where she still enjoys life.

She doesn’t attribute her longevity to good eating habits.

So what is the secret fuel that keeps her going at 101 years of age?

“A lot of people have to have their coffee, but I gotta have my Coke,” she answered.

Maybe the folks at Coca-Cola need to put her in a commercial.

After all, how many companies can get a testimonial from a 101 year-old user of their product?