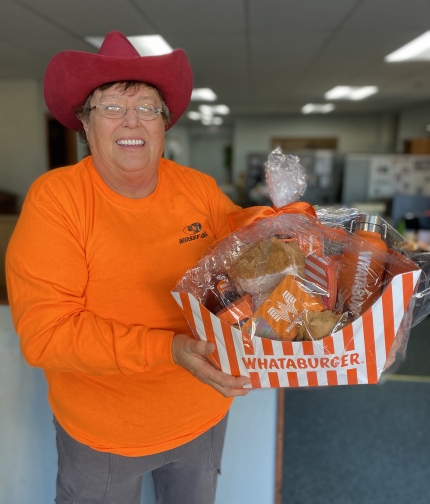 Gainesville resident Ruby Winslow shows the basket of items she received for being the first ever customer at the newly opened Whataburger in Ozark. Winslow also received a certificate for free meals for a year.

Gainesville resident Ruby Winslow says she has recently obtained an accolade that she’s dreamed of nearly all her life. She is now one of the few people who can say they’ve purchased the first Whataburger sold at a location of the popular chain restaurant.

“It’s the ultimate achievement of any Whataburger fan, and I did it. It took being camped out for 30 hours before they opened, but I finally did it!” she proclaimed proudly at the Times office last week after returning from the Ozark location of the restaurant, which officially opened Jan. 3.

“I grew up in south Texas where Whataburger started. The first location was opened in 1950 in Corpus Christi, [Texas], and I was born in 1953. When I was in junior high, I’d go to school with 50 cents for my lunch, and I got Whataburger everyday. I’d get a 35 cent hamburger and a 15 cent Dr. Pepper,” Ruby said.

Although Ruby and husband Butch moved to Ozark County in 1977, she remained a loyal fan.

“We went anytime we could. We even scheduled our trips around Whataburger locations. When I would get together with my friends back in Texas and we’d talk about where to eat lunch, I’d never get a vote because I always wanted Whataburger. Every single time,” she said, laughing.

Ruby is in good company in her Whataburger fandom. Kansas City Chiefs quarterback Patrick Mahomes is also a huge fan of the burger joint.

In 2018,  Mahomes’ first year as starting quarterback for the Chiefs, Whataburger tweeted a photo of the restaurant’s “fancy ketchup” with the caption “Hey, @PatrickMahomes5, let us know where we should send this.” In response, Mahomes retweeted, saying “I just want a store in Kansas City!” That want became a reality when Mahomes himself partnered with a company, KMO Burger, to open the first franchise location in Kansas City, Missouri, in November 2021. Soon after, the restaurant announced that it’d be bringing multiple locations to the Ozarks region of Missouri also.

When Ruby heard that Whataburger was expanding its reach closer to home, she was thrilled. Whataburger announced that its first restaurant would open Dec. 12, 2022, in Republic. That’s when she concocted the plan to earn the title of being the first customer to buy a burger at a location.

“We went to the opening of the one in Republic on Dec. 9, and we were in line for six hours, but we were fifth,” she said. Whataburger fan Connor Steele was the first in line at the Republic location, parking at the restaurant location 12 hours before its grand opening. Ruby and Butch were happy to have been one of the first customers, but Ruby wanted to be the first.

“I thought, you know I’m going to get up there to the Ozark location really early on its opening day,” Ruby said.

So at 3 a.m. Jan. 2, Ruby left her house in Gainesville to drive to Whataburger in Ozark awaiting its grand opening the next day. To her relief, when she arrived, there wasn’t another car in sight.

“The staff were all really nice to me. They’d come by and make sure I was doing OK and ask if I needed anything. We had some nice conversations, but I wouldn’t move my car,” she said. “I slept in there overnight.”

At some point other Whataburger fans came pulling in, hoping they’d be the first in line too.

“They were really nice, and a lot of them were really dedicated. But I guess not as dedicated as me,” she said, beaming. “People ask if I’m crazy, but I just tell them if they’ve never had one, they just can’t understand.”

For her dedication, the staff at the restaurant awarded her huge prize basket filled with Whataburger memorabilia and paid for her meal.

“Even better than that, they gave me a coupon for a free meal every week for a year,” Ruby said. “Butch wasn’t happy about that, because now he knows we’re going to need to schedule that trip in each week.”