Gourds can be useful in many creative ways 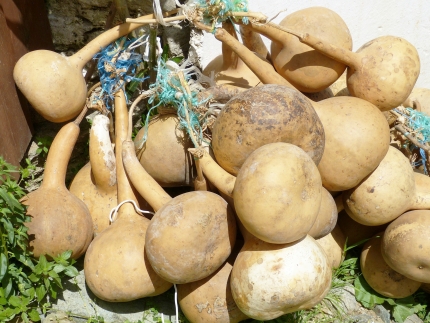 Gourds can be useful in many creative ways

Our ancestors couldn’t go to the hardware store or shopping mall to buy utensils and other household essentials. Instead, they improvised with items found in nature. The dried fruit of several members of the cucumber family proved useful for many purposes, says University of Missouri Extension horticulturist David Trinklein.

Today, we call these plants gourds, and they may be among the first domesticated plant species, dating back as early as 13,000 B.C.

Members of the genus Lagenaria produce white flowers that open at night and have soft, delicate foliage. Most bear fruit that have thick, hard shells when dried. This makes them useful for items such as ladles, dippers, spoons and containers. Native Americans made gourds into birdhouses to attract purple martins, which helped with insect control.

The fibrous interior of gourds from the genus Luffa has been used for items as diverse as oil filters, life preservers, scrubbing sponges (called “luffas” or “loofahs”), hats and upholstery.

Most of the colorful gourds people use for autumn decoration belong to the genus Cucurbita. They are close relatives of pumpkin. Members of this genus produce yellow flowers that open during the day and have coarser foliage than the white-flower types. Examples include the pear, egg, orange, spoon, bicolor and warted gourds.

If you have gourds in your garden, harvest small ornamental gourds as soon as rinds mature and harden. Cut them from the main vine, allowing a small portion of the stem to remain attached. Whether harvested or purchased, fresh gourds need to cure for several weeks in a warm, dry area with good air circulation. After curing, dip or coat them with a household disinfectant to prevent storage diseases. A light coat of wax also protects them from disease and gives them an attractive sheen.

Leave the hard-shelled gourds on the vines until vines die or freeze in late fall. Freezing does not harm mature gourds but it causes immature ones to collapse. Store hard-shelled gourds in a warm, dry area to cure. For most types, curing takes about four months. Curing is finished when the seeds inside the gourd rattle when shaken. The gourd can then be sanded, sawed, painted or polished.

“For adventuresome gardeners, saving seeds from gourds can be interesting,” said Trinklein. Cucurbits freely cross-pollinate, so seeds saved from gourds grown in the garden will likely produce fruit of different shapes, sizes and colors. “More likely than not, very few of the offspring will resemble the fruit from which the seed was saved.”

For more information, see David Trinklein’s article about gourds in the August 2015 issue of “Missouri Environment & Garden” at ipm.missouri.edu/MEG/?ID=347.

• Gourds were used as life preservers in ancient China.

• For a brief time in the early 1800s, gourds served as the official currency of Haiti. Today, Haiti’s currency unit is still called the “gourde.”

• The papery, winged seed of the climbing gourd has a wingspan of 5 inches. It reportedly inspired the design of early aircraft and gliders.

• According to the Guinness Book of World Records, the world’s longest gourd grew in China in 2008. It measured an astonishing 14 feet, 11 inches.

• East Africans often give gourds with picture stories carved on them as wedding gifts.

• Ricky Ricardo’s bongo drum in the television sitcom “I Love Lucy” was made from a zucca gourd.