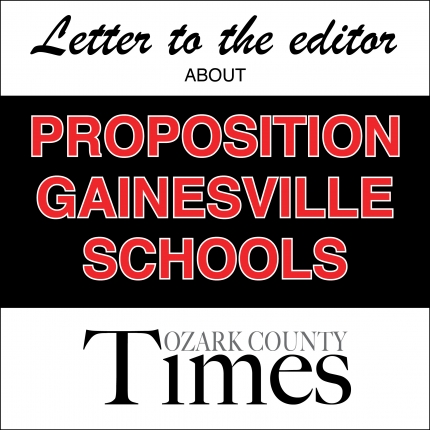 The selling point to convince the voters of the Gainesville school district to approve the increase in the school tax levy is how “little” it will cost a person whose house is valued at $50,000.

If a farmer buys a tractor for $90,000 and finances the entire amount, he will have to pay tax on the entire assessed value as long as he owns it.

The voter is agreeing that he, his children and grandchildren will pay the tax as long as they own anything in the district.

When the voter or a member of his family becomes ill and he is deciding if he can afford to buy food or medicine, he will not have a choice about paying his property tax, including this tax.

When the farm has no profit because of a flood, a drought, illness or death of his livestock, or an increase in the cost of feed or machinery repairs, he has to pay the property tax.

In a meeting to campaign for the tax, the administration spoke of the tax raising $5 million. However, the flyer provided lists $5.7 million in its “breakdown of expenses.” There is no expense listed in this “breakdown” for hiring or retaining competent teachers. I believe a child’s education is affected more by the quality of the teacher than a storm shelter or multipurpose facility.

A person who has assessed property totaling $50,000 will pay $375 per year, or $31.25 per month in additional tax when the rate reaches 75 cents per $100 assessed valuation. If his electric bill or telephone bill increases $31.25 per month he would seek ways to decrease them by turning off lights, using candles and writing letters or using the internet instead of the telephone. The only way to decrease his taxes is to dispose of assessed property.