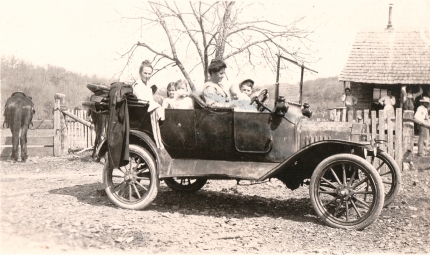 In this photo, probably taken in 1909, Florence Hunt (1869-1951), left, and her sister-in-law, Alpha Bet Morrison (1886-1953), take Alpha’s kids for a pretend drive in the early Model T touring car owned by Alpha’s husband, A.P. Morrison. Alpha and A.P.’s son, Verd Morrison of Hollister, said Sunday he thinks the little girls in the backseat are twins Lola and Nola Morrison, born in 1906, and the boy at the steering wheel is probably Afton, the Morrisons’ oldest (born in 1905), while baby Lloyd, born in 1909, is held by his mother. Verd thinks the photo was probably taken near Zanoni, where the Morrisons lived, and he speculates that Florence or one of the men standing on the porch may have ridden the horse, at left, to visit his family. The photo is from the collection of the late Reva Luna Miller and was shared by Jan and Mark Miller.

The Lieutenant Governor granted six paroles on July 4. Among the number is Ben Richardson, serving a sentence of 99 years for the killing of Alf Henry in 1920.

Richardson was convicted of cattle theft in Ozark County and was in the Howell County jail for self keeping, the penitentiary being quarantined because of small pox. With a fellow prisoner named Grady, he assaulted Jailor Alf Henry, who had brought their breakfasts. They escaped. When the body of Henry was discovered, a general alarm was sounded and hundreds turned out to hunt the slayers.

Grady was captured near Koshkonong and confessed that Richardson killed the jailor.

Prosecuting Attorney J. Otis Livesay made a vigorous prosecution, and the late Bob Tyree made as strong a defense as possibly, but the jury promptly brought in a verdict of guilty.

. . . On account of sickness he was transferred to the hospital at the penitentiary from which he made his escape but was soon recaptured. . . . It is not known why the parole was issued or who he was paroled to.

Mammoth – Miss Cora Foster has begun her school at the Swafford school. She has a 9 months term.

W. L. Dye is having a grain house built of iron. He says that the rats eat about one-fifth of the grain raised in this county.

Noble – A few cases of measles yet.

Several from here attended the picnic at Romance.

Work on the new courthouse is progressing, pouring the vault walls, girders, and the second floor will be done during the next 10 days.

H. E. (Hopple) Power was down from Joplin feeding the fish near Oakland. The Mayor brought his brother along and gave him a pleasant introduction to his friends, the mosquitoes, snakes, bullfrogs, cranes and water dogs.

Pfc. Cleo Robison is spending a 30-day furlough with folks and friends around Thornfield. He was in action in Germany.

Pvt. Max Mahan, who has been overseas for several months in the German theater of war, arrived home a few days ago on a 30-day furlough. He is a son of Mr. and Mrs. Homer Mahan of this city.

Rawland Trent, son of Mr. and Mrs. A. D. Trent of Thornfield, is home from camp on a 15-day furlough. Young Trent has been in the navy the past year. The Trents have an older son, Paul, who has been in the army four years and went all through the European theater of war. He will receive his discharge soon.

Howard Ridge – Pfc. Max Baxter and wife have been visiting a few days with his father and mother. Max has served in the army in Europe for some time.

Our teacher, Miss Geraldine Kirkland, was severely bitten by a snake last Friday. She is recovering but has had to postpone school for a while.

The Modern Telephone Co. has selected a site for a building to house the central office equipment for a new exchange being established at Dora, according to Doyle Cockrum, local manager of the company.

Besides the building, there will be 90 miles of new cable constructed in the area.

The new facilities will improve service to about 150 present customers and for some 100 new customers who are presently without telephones.

The city of Gainesville has recently been notified that it has been approved for an $8,000 grant from the Missouri Highway and Transportation Aviation Division to make needed improvements to the Gainesville Municipal Airport.

According to David Stevens, airport manager, the grant will help pay for the lighting of the north/south runway. Stevens said the grant will also go to purchase visual approach aide equipment and a beacon for the airport.