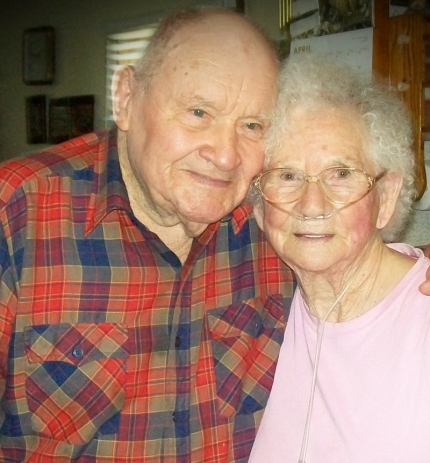 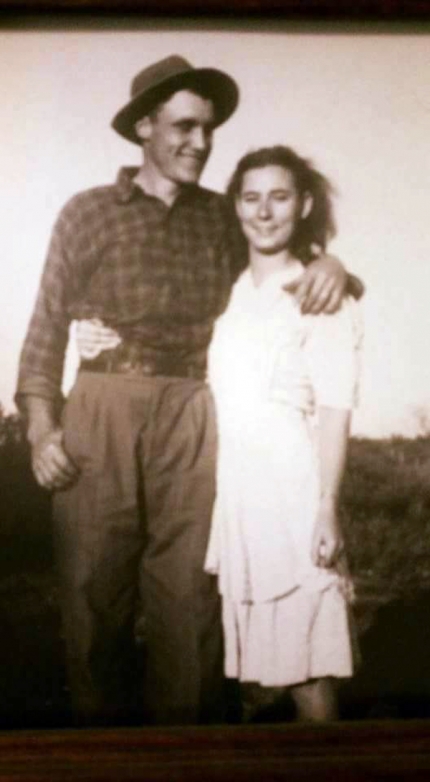 The couple on their first date.

Wasola residents Royce and Evelyn Eslinger recently celebrated their 72nd wedding anniversary.
Royce was born in 1922 in a log cabin at Romance, the son of Fred and Drotha Gardner Eslinger. Evelyn was born in 1925 in Warner, North Dakota, the daughter of Scott and Gladys Hill Price. Her family moved to Ozark County when she was a young girl. She and Royce  attended the one-room school at Romance and began dating while attending Gainesville High School.
Royce was drafted in December 1942. While he was away, serving with the Army during World War II, he mailed postcards to Evelyn every day, tucking a dime into the paper layers of the cards. Evelyn, who worked as a janitor at the school, saved the dimes and eventually bought a calf with the money Royce sent her, as well as another calf she had saved up to buy.
Evelyn attended college in Springfield for one semester, and when Royce’s Army service ended after four years in March 1946, he traveled to Springfield to pick her up. They were married on May 4, 1946, in Mountain Home, Arkansas, and sold the calves Evelyn had purchased and bought a farm and built a house in Almartha. Their daughters Linda and Louise were born in Gainesville in 1949 and 1951.
In August 1952, the Eslingers moved to Lawrence, Kansas, to work in the wheat fields and then in a factory. Their daughters Ona and Evelina were born in Kansas in 1952 and 1955. The Eslingers then moved back to Almartha. Their son, Calvin, was born in 1957, and their daughter Glenda was born in July 1962.
Royce worked as a service repairman for Gainesville Hardware, often working 15-hour days. Evelyn was a housewife who took care of their six children and worked their farm, where they raised polled Herefords, turkeys and rabbits. They always had a huge garden and lots of horses. They also owned the Dairy Princess in Gainesville for a few years.
Their daughter Louise, who suffered from cerebral palsy, died in 1964 just before her 13th birthday. Their son Calvin died in 2013, and their daughter Evelina died in 2017.
They also have 12 grandkids and 20 great-grandchildren (including Calvin Williams, who died in infancy in 2016), and one great-great-grandchild.