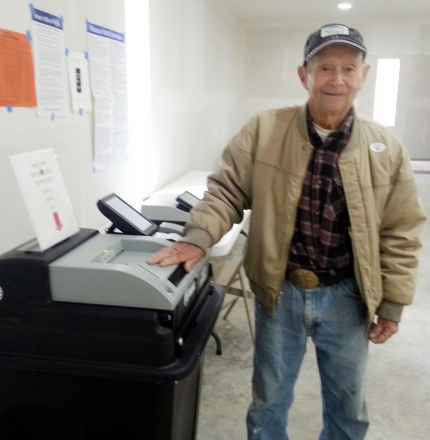 Bud Mayfield, who will celebrate his 100th birthday at a party Saturday, Dec. 1, in Thornfield, voted in the Nov. 6 election. 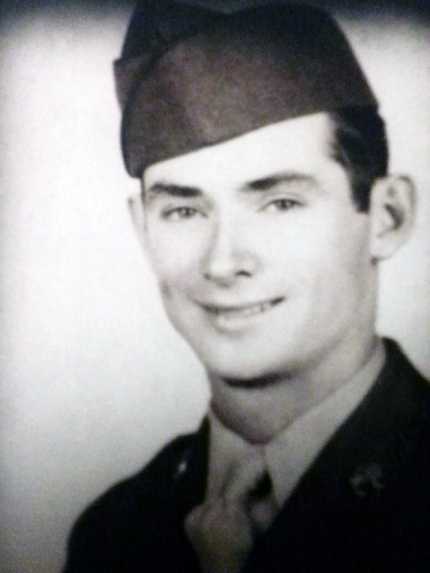 Friends and relatives are invited to help Orland “Bud” Mayfield celebrate his 100th birthday at a gathering from 1 to 3 p.m. Saturday, Dec. 1, at Thornfield General Baptist Church, 109 County Road 916, off Highway 95 in Thornfield.

Bud was born Dec. 3, 1918, in the countryside near Hartville, the son of Andrew “Andy” and Canzady “Zady” Hurt Mayfield. After completing the eighth grade at Morning Sun School in Wright County, he stayed home to help his family. In 1936, when Bud was 17, his parents sold everything and moved the family to Castroville, California, where other Missouri families had settled.

During World War II, Bud served in Germany with the Army’s 89th Infantry, known as the “Rolling W.” After the war, he and Geneva raised their four children in Californai, where  Bud worked as a carpenter for 30 years, retiring in 1974.

Two years before that, in 1972, the Mayfields came to Ozark County, looking for a place to retire. They chose the Longrun area, near Thornfield, which Bud had visited in the 1950s after his parents had moved back to Missouri after a short time in California. They bought the Walter Haskins place, just above Haskins Ford, and moved there permanently in 1974, after Bud retired.

Bud was known as someone who would help friends and neighbors with construction projects, refusing to accept pay. He joked that he was retired, and if he accepted pay, then he would be working.

During his nearly 40 years in Ozark County, Bud has enjoyed hunting, fishing, going to local auctions, attending Hootin an Hollarin and many other activities, and spending time with his many friends here.

He looks forward to greeting friends and family at his birthday party but asks that no gifts be brought.