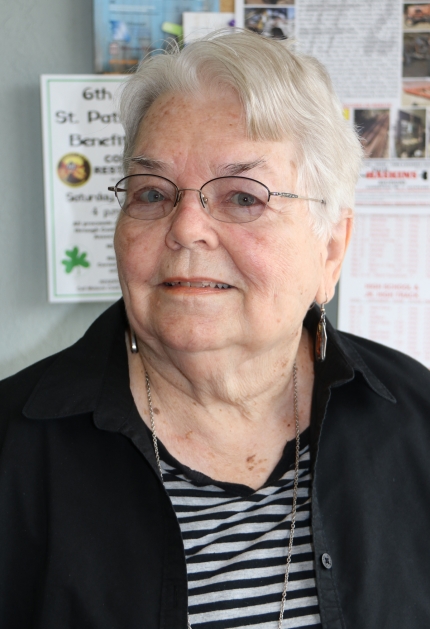 Ethel Bohannon of Howards Ridge will celebrate her 90th birthday with a party hosted by her children from 2 to 4 p.m. Saturday, April 14, at the Lick Creek VFD firehouse on J Highway. Everyone is invited; Ethel welcomes greeting cards but asks that no gifts be given.
She was born April 12, 1928, in Udall, the daughter of Ernest and Nova Poe. The family was living on Liner Creek when she became school age. She attended grade school at the one-room Liner School where Roy Davis was the teacher.
She went to Bakersfield for her first year of high school. She and her sister, Olene, “had to walk 2 miles and then get in a boat with some other kids – I think two of them were Bill and Junior Kirkland – and cross the river and then walk up the big hill on the other side to catch the school bus,” she recalled.
She remembered one winter morning when “there was ice in the bottom of the boat, and I slipped and went into the water.” Neal Satterfield, who had a car, drove some of the kids from Howards Ridge to Liner so they could cross the North Fork of the White River together. “He put me in the car and took me home so I could change clothes. Then he took me back to the river, and I crossed it and climbed the hill, and the bus driver had waited for me,” she said.
As the North Fork River became Norfork Lake, it covered most of her family’s land, and they moved a short distance away. The lake was too wide for the school kids to cross in a rowboat.  “So after that first year of high school at Bakersfield, when the lake filled in, we had to go to Gainesville,” she said.
She graduated in 1946 and taught a term at Seed Tick school, living with a family on that side of the county. Soon afterward, she and her sister married their fiances at a nearby preacher’s house.
Her first husband worked at timber cutting to clear land for the rising lake. When that job ended, they moved to Wichita, Kansas, where both of them went to work for the Boeing Aircraft Company. “I worked there 15 years,” she said, “and while we were there we adopted two children.”
When their kids, a girl and a boy, were ages 7 and 2, the family moved back to Ozark County “so the kids could go to school where we did,” she said.
She and her first husband eventually divorced, and later, in 1976, she married Troy Bohannon. They still live in the house they built in Howards Ridge several years ago.
For many years, Ethel made a quilt every winter, and she was part of the group that met each week in the Lick Creek VFD firehouse to complete quilting projects. She still enjoys quilting but says “all the quilters I quilted with are dead now. I’m the only one left.” She still enjoys quilting, though, as well as embroidery and reading.
Her family includes her daughter, Anita Shikany and her husband Jim, of Ozark; her son, David Hollingsworth and wife Mary, of Loveland, Ohio; three stepsons, Lee Bohannon of Texas, Stacy Bohannon of Arkansas and Steve Bohannon (deceased). She also has three grandchildren and two great-grands.