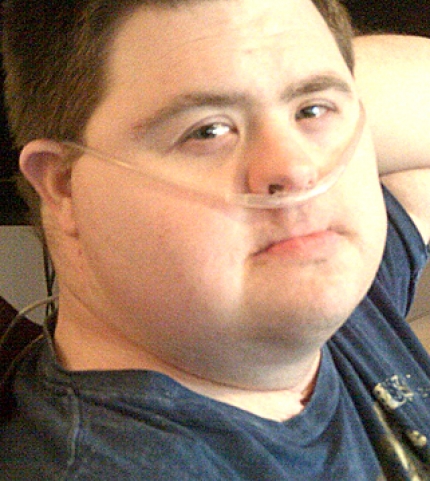 Funeral services for David William Anderson, 37, of Springfield were held Dec. 26, 2019, at Greenlawn Funeral Home South in Springfield with Pastor Jerry Robards officiating. David died Dec. 19 at Mercy Hospital in Springfield.
He was born July 30, 1982, in Springfield, the son of David and Loretta Martin Anderson. He graduated from Central High School in 2003 and then attended Adult Tender Care, where he enjoyed daily activities including coloring, watching movies, water gun fights in the summer, decorating pumpkins in the fall, having Santa visit in the winter and planting flowers in the spring. He had several favorite characters from shows and movies:  Power Rangers, Scooby-Doo, Shrek, Jaws, Spider Man, Jurassic Park and Ninja Turtles. He loved playing with his cars and swords.
Taking trips to the “video store” to add to his DVD collection was one of his favorite things to do. He would reach up to his dad and say, “Store,” and they would go to the library to check out movies he already had at home.
He enjoyed playing games on his tablet, and, when he was younger, he liked to take bike rides.
David loved a good party, whether it was a family birthday or a Christmas get-together. He made several lifelong friends whom he loved and appreciated dearly.
He spent a lot of time with family. Friends and relatives knew he remembered them when he gave them a hug with the greeting “Friend!” – or called them the wrong name on purpose.
Survivors include his father, Mike Anderson; one sister, Michelle Anderson and husband Cody; one brother, Nick Anderson and wife Hayley, all of Springfield; two nieces; and several cousins, aunts and uncles, including several who live in Ozark County.
He was  preceded in death by his mother, Loretta Anderson; and all of his paternal and maternal grandparents.
Burial was in Martin Cemetery south of Dora.
Greenlawn Funeral Home South, Springfield, directors.